It’s a well-known fact that heart defects have gripped a large proportion of the world population, as the harms of following unhealthy lifestyle habits have started to take a toll on people’s health. With surgeries related to structural heart diseases on the rise, structural heart devices have proved mightily helpful in medical scenarios.

All these figures are indeed a cause of concern for us common citizens. A good proportion of the global population is focused on following a healthy lifestyle. However, still more are stuck on an unhealthy one, which act as an open invitation to such diseases. Most structural heart conditions are congenital, but they may also be acquired later in life.

Till some time back, the way of treatment for such conditions was an open heart surgery. However, catheterization has since surpassed it. The presence of the structural heart devices market has provided surgeons the advantage of performing minimally invasive procedures. Transcatheter procedures are preferred over open-heart surgeries due to advantages such as lesser recovery time and procedural risk. It also avoids cardiopulmonary bypass, which reduces risk, thereby giving enhanced patient care. Operator expertise adds to the improved results of these procedures as compared to open-heart procedures. Also, patients incur less expenses owing to the shorter stay in the hospital.

Positive clinical evidence of structural heart devices are resulting in their increased use in the treatment of CHD. Similarly, other data supporting the results such as the STS National Database and American Heart Association Abstracts also encourage surgeons to conduct these procedures. Guidelines by the American College of Cardiology, American Stroke Association, and American Heart Association also standardize the procedures, thereby reducing the intraoperative risks and improve the outcomes of the surgeries.

Shining A Light On The Structural Heart Device Market Scenario

Aging population is driving the overall healthcare segment across the globe. Moreover, increasing focus on the quality of life of this group is further boosting the health care space, which extends to the structural heart devices industry. Cardiac disorders are highly common and people are aware of the consequences and readily seeking treatments for the same. These defects may be present at birth or may occur late in life due to wear & tear of the tissues. This adds to the already existing lifestyle diseases related to heart and results in occurrence of stroke. Thus, operations to reduce the risk of stroke are gaining roots in the market, which is expected to drive the structural heart devices market.

Asia Pacific is expected to be the most lucrative region for the industry. This can be attributed to the rapidly increasing geriatric population, presence of a large patient base, growing awareness & increased healthcare expenditure, and efforts of industry players to enter the market by introducing new products. North America held the largest share in the structural heart devices market in 2016, while it is expected to maintain its dominance over the coming years, with a strong preference for minimally invasive procedures factoring in its growth in the region. 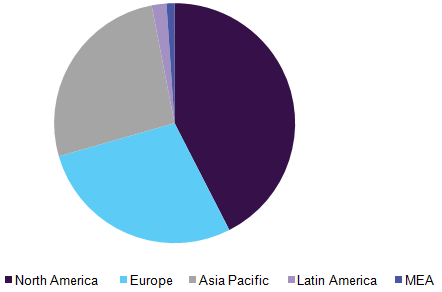 Competitors Stepping Up Their Game