The global 1,4 butanediol market size was valued at USD 6.19 billion in 2015 and is expected to grow at an estimated CAGR of 7.7% from 2016 to 2025. Increasing applications of its derivatives in various industrial processes along with the growing demand for spandex in textiles have been responsible for driving growth in recent years.

Tetrahydrofuran (THF), one of the major derivatives of BDO, is widely utilized in multiple applications such as in the production of polytetramethylether glycols (PTMEG). This is further processed to derive spandex, and as an intermediate in manufacturing natural gas odorants owing to its wide liquid range.

Growing awareness regarding the processing and utility benefits of these, and other BDO derivatives, are responsible for industry expansion. Major multinationals are also shifting their production capabilities towards emerging economies in the Asia Pacific, and introducing new technologies, which is anticipated to drive innovation shortly.

Growing demand for spandex production has largely influenced THF consumption in recent years. The segment occupied over 50% of the volume share in 2015 and is expected to remain the dominant application over the near future as well. Rising health, fitness, and sports awareness has also driven the demand for flexible, yet comfortable athletic & sportswear. This, in turn, has contributed positively to THF consumption in spandex fiber applications.

Polyurethane (PU) emerged as another fast-growing application, with the rising consumption of lightweight and durable parts for the automotive, construction, and electronics sectors. Extensive R&D in the global plastics industry on account of mutable needs has prompted the development of novel PU products that outperform conventional plastics. PU is thus likely to grow at over 7.2% in terms of revenue from 2016 to 2025.

Other products such as gamma-butyrolactone (GBL) and polybutylene terephthalate (PBT) are also expected to grow at commendable rates on account of their increasing consumption in varied end-use industries.

Asia Pacific emerged as the largest 1,4 BDO consumer in recent years, with over 63% volume share in 2015. The region is home to several rapidly expanding industries and a wide consumer pool with growing income levels, which has helped shape the industry dynamics.

Major multinational producers in developed countries are also attempting to utilize low-cost labor & resources in emerging economies such as India, Vietnam, Thailand, and Indonesia. The region is thus expected to grow at the highest CAGR of 8.5% from 2016 to 2025. 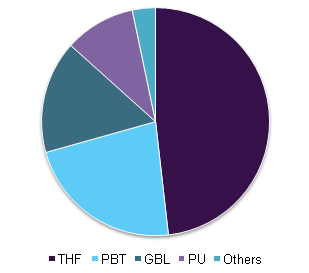 Developed regions such as North America and Europe may grow at lower rates, owing to end-use industry saturation and downward revision of GDP growth rates in major economies such as the U.S. and Canada.

Other significant industry participants include Myriant Corporation, Dairen Chemical Corporation, Toray Industries Inc., Sipchem, and Genomatica among others. The market is concentrated in the hands of these and other key players, compelling new entrants to adopt new products & technologies that compete with existing multinationals in the industry.

This report forecasts volume & revenue growth and provides an analysis of the latest trends in each of the sub-segments from 2014 to 2025. For this report, Grand View Research has segmented the 1,4 butanediol market based on application & region: