The global aerospace coating market size was estimated at USD 1.56 billion in 2017. Growing investments in the aviation sector, coupled with an increasing number of aircraft fleets in the Asia Pacific, are anticipated to drive the market during the forecast period. They are applied on both the exterior and interior surfaces of an aircraft.

These coatings are further employed by various end-users including commercial, military, and general aviation fleet manufacturers. Major players in the market are investing in R&D activities to widen application scope and market reach of the product and, in turn, sustain their competitive positions. 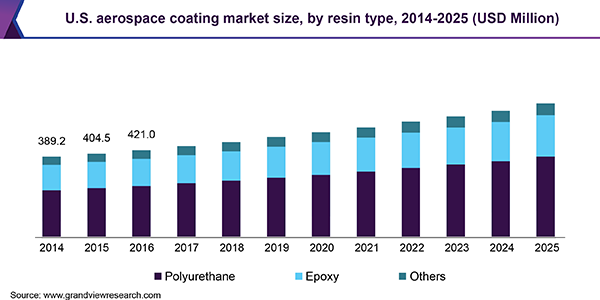 Increasing the spending power of people in countries such as the U.S. and Europe is stirring up the demand for air travel considerably. This, in turn, is resulting in an increased demand for the product, majorly driven by commercial fleet manufacturers. The use of solvent-based coatings is limited in regions such as Europe and North America due to stringent regulations on harmful emission-causing chemicals, which include volatile organic components. Water-based counterparts are projected to witness a healthy rise in demand over the coming years.

The regulatory framework for the market is governed by various regulatory bodies including the Occupational Safety and Health Administration (OSHA) and the National Toxicology Program (NTP). The framework specifies the chemical dangers of raw materials used in the manufacturing process. The coating, curing, and general safety of coatings and its raw materials such as epoxy resins, aluminum, and chromium, which are used in the production of the product, are permitted when safety regulations are stringently followed.

The Asia Pacific is poised to emerge as the most promising regional market during the forecast period. An increasing number of air passengers and growing investments in the defense sector are some of the key factors contributing to the growth of the region. There is a strong demand for the product from the maintenance, repair, and overhaul (MRO) industry in the region owing to the presence of long haul routes.

Polyurethane resins are the most widely used resins in the market and are available both in single and two-component systems. The resin segment accounted for approximately 60.0% of the market volume in 2017. These coatings are critically used in exteriors of aircraft owing to high erosion resistance and elastomeric properties that ease their application. Several stringent regulations pertaining to VOC and chromate coatings in regions such as North America and Europe are fueling the demand for polyurethane coatings.

Liquid coatings include solvent-based and water-based coatings, wherein solvent-based coatings edged over the other in terms of demand and are the leading revenue contributor to the liquid coatings segment. Solvent-based type, being less vulnerable towards harsh climates, is used predominantly in the aerospace industry. Several limits and standards on VOC emissions by governments of various countries are estimated to inhibit the growth of this product sub-segment over the forecast period.

Constraints on solvent-based aerospace coatings coupled with new technology developments in coating formulations are anticipated to trigger the growth of the water-based sub-segment during the forecast period. Powder coatings have been gaining rapid demand in recent years due to ease of application and their environment-friendly characteristics. The segment is projected to register the highest CAGR of 6.4% in terms of revenue from 2018 to 2025.

The commercial end-user segment commanded about half of the overall revenue of the aerospace coating market in 2017. Rising demand for passenger air travel owing to increasing tourism and decreasing travel costs is leading to an upswing in the number of commercial aircraft across the world. Growing trade volumes by countries such as China and India are stimulating the demand for air cargo.

The military end-user segment is poised to experience noteworthy growth during the forecast period owing to surging demand for high-quality coatings with enhanced durability. Military aircraft, which are typically built with aluminum alloys require coatings with increased corrosion resistance.

The market, on the basis of industry category, has been bifurcated into OEM and MRO. There is a high demand for these coatings among aerospace OEM manufacturers. In terms of revenue, the OEM segment is likely to expand at a CAGR of 6.0% over the forecast period. Various countries in Europe are aiming to strengthen their manufacturing base for commercial aircraft to reduce their import dependency on the U.S. This, in turn, is expected to boost the demand for aerospace coatings from OEMs in Europe.

External coatings are generally lightweight as a reduction in weight leads to improved energy and fuel efficiency. Polyurethane resin coatings are predominantly used in exteriors as they impart UV resistance. Exterior coatings held the leading share of over 70.0% in 2017. Interior coatings are applied in various interior aircraft surfaces including cabins, walls, ceiling, and panels. 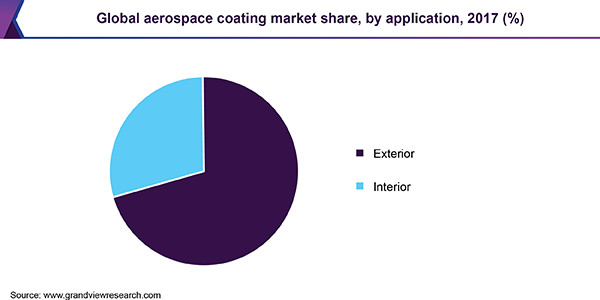 Emerging economies such as India, Brazil, and ASEAN countries are estimated to foster the demand for aerospace coatings for exterior applications owing to a substantial rise in air travel. An increase in per capita income of the middle-class population has led to a sharp rise in the number of air travelers in these countries over the past few years.

North America accounted for 36.1% of the overall market revenue in 2017. The region is anticipated to dominate the market through 2025, thanks to the booming aerospace industry in the U.S. along with the emergence of major aerospace companies in Mexico. Products with lower VOC and hydroxyapatite (HAp) such as polyurethane aerospace coatings are primarily used in this region due to stringent regulations by government bodies.

Post-BREXIT, airline companies in the U.K. have been expanding the capacity and frequency of air travel across the country in order to meet rapidly growing demand. This, in turn, is projected to propel the market in the country during the forecast period. Furthermore, the presence of various long haul airline routes in the Asia Pacific is promoting MRO activities, which is translating into greater demand for aerospace coatings in the region.

Companies majorly compete based on product varieties offered, since players have similar product portfolios. Low product differentiation has led to intense competition among players. Companies aim to offer products at a competitive price in order to strengthen their market position.

This report forecasts revenue growth at global, regional, and country levels and provides an analysis of the industry trends in each of the sub-segments from 2014 to 2025. For the purpose of this study, Grand View Research has segmented the global aerospace coating market report based on resin, product, end-user, industry category, application, and region: