The global aerospace and defense MRO market size was estimated at USD 44.4 billion in 2020 and is expected to expand at a compound annual growth rate (CAGR) of 14.0% from 2021 to 2028. Expansion of fleet by low-cost airlines, coupled with increased military spending spurred by the ongoing political conflicts and territorial disputes are expected to drive the market for aerospace and defense maintenance, repair, & overhaul (MRO) over the forecast period. The ongoing COVID-19 pandemic has resulted in lower aircraft utilization rates which led to a drop in demand for the commercial aviation MRO, whereas the cargo aviation MRO market had increased considerably owing to enhanced global trade relations. However, the defense sector was only mildly affected and reported modest growth. 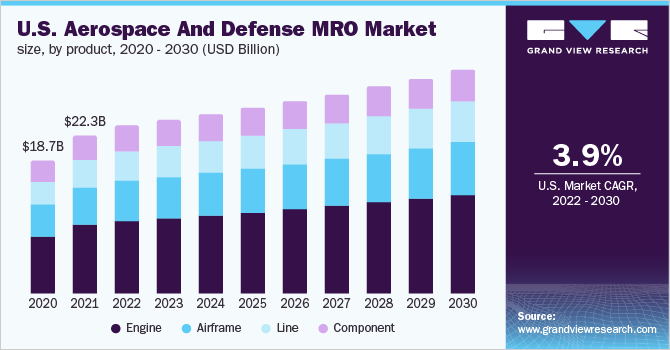 Covid-19 affected the cash flow of airlines and reduced demand for air travel which led airlines to put thousands of aircraft into the garage. With the purchase of new aircraft being viewed as a last option due to the need for significant investment, the majority of airlines are inclined towards keeping the optimum health of their fleet by taking exhaustive MRO plans.

The industry in the U.S. is fragmented and dominates the global market owing to the presence of established aircraft and components OEMs and MRO suppliers. The market in the U.S. is expected to be driven by the prevalence of aging commercial and military aircraft fleet, increased military expenditure, and the adoption of new policies by legislative authorities such as FAA and AIA.

The market for aerospace & defense maintenance, repair, & overhaul is expected to face a few challenges including, geopolitical conflicts, economic volatility, and new norms by regulatory bodies amid Covid-19. The market is facing an increasing threat of supply chain disruptions, which is expected to encourage the players to adopt digital management such as the use of RFID in parts tracing. However, suppliers and OEMs have limited collaboration making the MRO process extremely complicated and demanding. Such adverse factors jeopardize the growth of the market for aerospace and defense MRO during the forecast period.

The engine MRO segment led the market for aerospace and defense MRO and accounted for the largest revenue share of more than 40.0% in 2020. Regulations regarding reducing the environmental impact while increasing the performance of aircraft engines are a key area to consider for engine MRO. Engine OEMs continue to dominate the market with a variety of maintenance packages that are time-limited, and life-limited, usually covering the operator’s entire fleet.

Airframe MRO activities are expected to observe significant growth over the forecast period owing to the rapid fleet expansion, outsourcing of MRO services by OEMs, and modification and modernization of commercial and military aircraft. However, due to Covid-19, aircraft that required heavy maintenance had been prioritized for grounding, hence this segment is anticipated to be relatively affected by the downturn.

Line MRO activities include pre-flight checks, scheduled and unscheduled maintenance, inspection, and repairs and are directly linked to age and rate of utilization of aircraft. This segment is expected to grow rapidly over the next decade owing to high flight frequency, higher utilization of aircraft by low-cost airlines, and increasing use of military aircraft in combat training purposes.

Component MRO activities involve sourcing and fitting mechanical, structural, electrical, and hydraulic components with quick turnarounds. Factors such as the use of 3D printing in aftermarket components, RFID in component identification and tracking, and strategic collaboration between components OEMs and suppliers are expected to propel the growth of the segment.

The narrow body aircraft MRO segment led the market for aerospace and defense MRO and accounted for the largest revenue share of more than 53.0% in 2020, which can be attributed to less operating cost, low fuel consumption, and lower maintenance costs, and expansion by low-cost airlines. Airlines tend to reduce the size of the aircraft they used to keep load factors high while offering high-frequency service.

The high demand for wide-body aircraft MRO services can be attributed to the growth in long-haul routes with higher traffic, usually connecting international destinations. Due to expansions in global trade, demand for such types of cargo aircraft has increased which led to an increase in demand for related services.

The demand for regional aircraft MRO is estimated to grow at a steady rate over the forecast period owing to the dominance of aircraft OEMs, non-standardization of global MRO procedures, and high complexity. Furthermore, these aircraft are being replaced by narrow-body aircraft, which is expected to adversely affect the growth of the market for aerospace and defense MROover the forecast period.

The commercial MRO segment led the market for aerospace and defense MRO and accounted for the largest revenue share of about 70.0% in 2020. The demand for this segment is expected to be supported by increasing Low-cost Carrier (LCC) penetration in developing economies, growing urbanization, budding developing economy, rapidly growing international trade relations, and mandatory maintenance program for aging aircraft.

Business and general aviation MRO activities are highly consolidated with few players accounting for the majority of the market share and are closely linked and intertwined with general aviation. The demand for this segment is expected to be driven by the aging of business jets and the demand for customization and refurbishment of private aircraft. The market is regulated by the MRO standards set by global regulatory bodies such as the FAA, IATA, EASA, and ICAO. 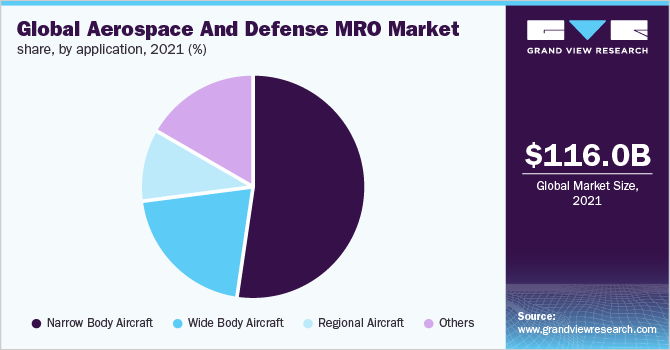 The growth in the global military aircraft MRO market is driven by higher delivery time of new aircraft, slower retirement of older aircraft, complex military aircraft components, and regional tensions due to territorial issues. Multirole military aircraft are likely to drive demand for MRO services, with the majority of the activity expected to be seen in the engine MRO segment.

Asia Pacific dominated the aerospace and defense MRO market and accounted for the largest revenue share of about 32.0% in 2020. Rapid economic growth, urbanization, the launch of new domestic airlines, and low-cost labor markets such as India and China coupled with government support in establishing the aerospace clusters are driving the need for aviation services in the region.

Europe is one of the most liberalized regions in terms of aviation policies and activities led by the Member States of the European Union (EU). Vertical integration across the supply chain, the presence of established OEMs, and industry favorable policies are major factors propelling the demand in the region. It is a mature re-fleeting market, whereas the Middle East, and Asia Pacific are being powered by strong fleet growth on the back of rising GDP and a growing middle class.

Costa Rica, Brazil, and Argentina are the fastest-growing economies in Central and South America, with Embraer S.A. leading the industry. Despite economic and political concerns, growth is set to continue in the next decades owing to the rapid modernization of the military fleet. However, infrastructure gaps and higher taxes on the sale or use of air travel, cap the investment in the expansion of capabilities.

Africa’s competitive advantage relative to many developed markets is its potential demographic dividend. Some governments in the region have created highly competitive aerospace clusters by designing highly convenient business policies for investors. However, aircraft MRO services are still not fully developed owing to the lack of economies of scale to develop a large-scale industry.

Key industry players are expected to maintain their position in the market for aerospace and defense MRO by introducing innovative products and services, thereby expanding their portfolio. The products launched with advanced features and customized product offerings are likely to strengthen the position of the industry players. Some of the prominent players in the global aerospace and defense MRO market include:

This report forecasts revenue growth at global, regional, and country levels and provides an analysis of the latest industry trends in each of the sub-segments from 2017 to 2028. For the purpose of this study, Grand View Research has segmented the global aerospace and defense MRO market report on the basis of product, application, end-use, and region:

How big is the aerospace & defense maintenance, repair, and overhaul market?

What is the aerospace & defense maintenance, repair, and overhaul market growth?

b. Asia Pacific dominated the aerospace and defense maintenance, repair, and overhaul market and accounted for about 32% share of the revenue in 2020, which can be attributed to increasing economic growth, rapid urbanization in developing countries, increased focus of OEMs on aircraft MRO, the launch of new airlines rapid, and fleet expansion by existing low-cost carriers.

Who are the key players in the aerospace & defense maintenance, repair, and overhaul market?

What are the factors driving the aerospace and defense maintenance, repair, and overhaul market?

b. The key factors that are driving the Aerospace & Defense MRO market include the launch of new domestic low-cost airlines and expansion of existing fleets, MRO outsourcing, increased focus of OEMs on aircraft MRO, growing demand from developing economies, the prevalence of aging aircraft fleet, and increased military spending.