The global agrochemicals market size was valued at USD 218.5 billion in 2020 and is anticipated to grow at a compound annual growth rate (CAGR) of 2.8% from 2021 to 2028. The market growth is dependent on pest attacks, crop yields, and agriculturists’ awareness levels & capacity to buy products depending on their availability of credit. Increasing demand for insecticides across the globe is also a major factor driving the market growth. Agrochemicals production has been impacted to some extent owing to the COVID-19 pandemic. Before the pandemic, some countries were dependent on China for raw material supply. Restrictions imposed on transportation and imports across borders in various nations have resulted in a shortage of raw materials. 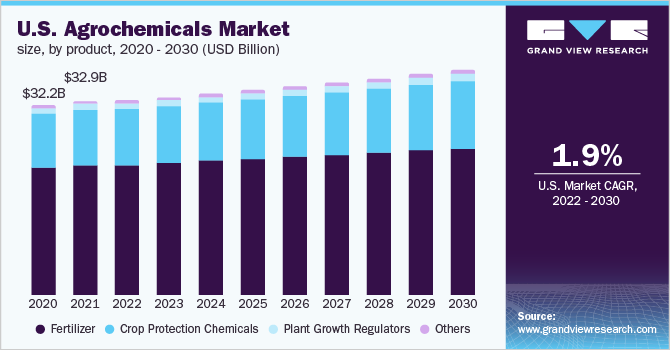 However, the market has recovered quickly as the governments of various nations have control over the essential business market. Agrochemicals are made of chemical substances and undergo various processes that release toxic gases and fumes, which can be harmful to the environment. Although beneficial for the crops, agrochemicals can have harmful effects on humans and animals. Thus, various regulatory authorities, such as Registration, Evaluation, Authorization, and Restriction of Chemicals (REACH), and the Environmental Protection Agency (EPA), address them by mapping and monitoring the toxicity emission within permissible levels. Thus, regulations on the usage of agrochemicals by various authorities in different nations are the major restraining factors for the market.

For instance, in Brazil, regulation for agrochemicals lies under Law 7,802 regulated by Decree 4,074. In India, pesticides are regulated through the Insecticides Act 1968 and Insecticides Act 1971. Similarly, various other regulations are there for different agrochemicals to limit their toxicity in the environment. Increasing regulations and growing demand for green products have influenced manufacturers to develop eco-friendly bio-based products. Thus, various companies are focusing on manufacturing bio-based agricultural products. For instance, Marrone Bio Innovation utilizes naturally occurring microorganisms and plants to develop high-performance eco-friendly bio-based agricultural products that promote crop health and manage pests, weeds, and crop diseases.

Increasing demand for fertilizers and pesticides across the globe is the key factor driving the agrochemicals market. Of the world’s total crop output, approximately 25% is lost every year due to pests, diseases, and weed growth. Therefore, agrochemicals play a major role in enhancing crop production and yield. Agrochemicals is an important segment in the chemical industry; they generated over USD 200 billion in revenue in 2020.

The growing demand for fertilizers and crop protection products in the agricultural area around the world is driving the global agrochemicals market. Other factors driving the agrochemicals market include the growing adoption of precision farming practices, diminishing arable land, and rising food consumption due to the increasing global population.

Due to the population explosion, farmers are required to produce more food in a short span. Also, the sizes of arable lands have shrunk due to growing population, urbanization, and industrialization, further increasing the pressure on farmers to produce a higher yield on less area of land. This is a huge concern for agriculture-based economies in the world such as India, which are highly dependent on agriculture and related activities. Thus, farmers resort to using fertilizers, crop protection chemicals, and other agrochemicals in order to increase the yield, in a short span of time.

Approximately 25% of the world's crop output is lost every year due to diseases, pest attacks, and weeds. Increasing utilization of pesticides in agriculture to increase crop yield and production is also driving the demand for agrochemicals. Fertilizers, pesticides, plant growth promoters, and adjuvants help in improving the crop yield. An adjuvant is an auxiliary that is added to the crop protection chemicals to increase their effectiveness. Various types of adjuvants are used with pesticides for different purposes.

Additionally, Feed is considered to be one of the most important components of animal husbandry. Agrochemicals such as fertilizers, crop protection chemicals, and plant growth regulators are essential for the production of animal feed. China, the U.S., Brazil, India, and Mexico are the largest feed-producing countries in the world, accounting for the highest consumption share too.

Nitrogenous fertilizers are readily available and help in fast plant growth & enhance yields. However, increasing usage of nitrogenous fertilizers has bad effects on the surrounding environment including water bodies. The crop protection chemicals segment is expected to grow at a considerable CAGR over the forecast period, in terms of revenue. Crop protection chemicals include insecticides, fungicides, herbicides, and other products, such as rodenticides, bactericides, etc. Herbicide is expected to dominate the crop protection chemical segment. Herbicides are extensively used pesticides in the agricultural sector. They are used to control various types of unwanted plants in the crops, such as weeds.

According to the FAO, in 2019, over 2 million tons of herbicides were consumed globally. This is twice the number of insecticides used in 2019. The demand for insecticides is expected to be high in the Indian market. According to the Federation of Indian Chambers of Commerce and Industry (FICCI), insecticides account for the largest market share in the Indian agrochemical market. This growth can be attributed to the increasing demand for the product for various crops, such as cotton, paddy (rice crop), and fruits & vegetables among others. They are found effective in preventing early germination pest attacks in various crops. Insecticides are the second-largest application segment for agrochemicals.

Soil nutrient deficiency can result in less bioavailable nutrients in crops, such as wheat and rice, and can cause decreased yields. The fruits & vegetable segment is expected to grow at the fastest CAGR over the forecast period. This growth can be attributed to the growing demand for fresh fruits and vegetables across the globe owing to the increasing health consciousness among consumers. According to the Horticultural Statistic at A Glance 2018, the production of fruits increased from 74.9 million tons to 97.4 million tons from 2010-11 to 2017-18. 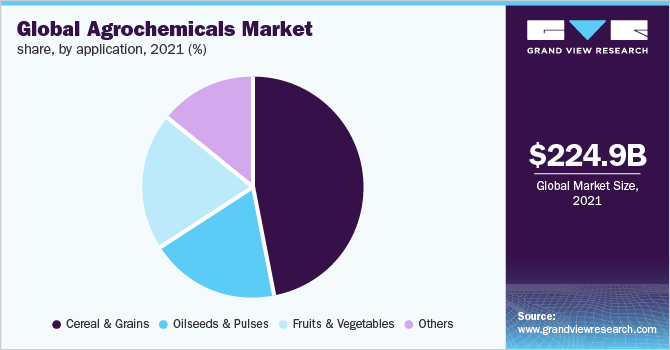 Asia Pacific was the leading regional market with a revenue share of 27.2% in 2020. The region is the major producer of agricultural products in the world. Countries, such as India, China, and Japan, are the key contributors to the regional market. According to the International Trade Center (ITC) and FAO, China is the top exporter and producer of pesticides in the world. According to the Organization for Economic Co-operation and Development (OECD) and FAO, India is the fourth-largest producer of agrochemicals in the world after China, Japan, and the U.S. The region’s per capita income is majorly dependent on the agricultural sector.

The region is expected to account for 53% of the global output of agricultural products and fish by 2030. The population in the region is growing at a CAGR of 0.6% and is expected to add 322 million people to the current 4.3 billion population by 2030. Due to increasing population and rapid urbanization & industrialization, the total arable land is shrinking in the region. Thus, agriculturists opt for agrochemicals that help in increasing productivity and yield. The U.S. is one of the major food-producing countries and also ranks among the top 10 countries by geography.

Asia Pacific is considered to be one of the emerging regions in the world. With fast-growing countries such as China and India, the region is expected to be a leader in various sectors including agriculture, manufacturing, pharmaceuticals, and food & beverages. The region is characterized by availability of cheap labor and abundant raw materials. However, water scarcity, climate change, and land degradation are some of the major challenges faced by the agricultural industry in Asia Pacific.

The U.S. ranks first in the production of some of the crops, such as maize, sorghum, blueberry, and almonds. According to the FAO, the U.S. is one of the major producers, consumers, and exporters of agrochemicals. Some other factors driving the market in the country are better prices for grain commodities, positive weather patterns, and easing trade tensions with China. Also, the drought conditions in the western U.S. have propelled the demand for miticides.

The U.S. accounted for the majority of the market share in the North American agrochemicals market owing to the increasing demand for crops such as maize, sorghum, soybean, and blueberry. In addition, the U.S. is also the largest producer of maize, sorghum, blueberry, and almonds. In addition, it is the largest producer of soybean after Brazil. These are the major factors for the market growth in the country. The United States is a major producer, consumer, and exporter of agrochemicals, as per the FAO. Better prices for grain commodities, favorable weather patterns, and reducing trade concerns with China are among the key factors driving agrochemical growth in the country.

The global market is highly competitive due to the presence of a large number of tier I, tier II, and local players. Manufacturers in the market offer a wide range of products including fertilizers with improved effectiveness, and pesticides, such as herbicides, rodenticides, fumigants, insecticides, fungicides, and plant growth regulators. The competition among players is based on numerous parameters including product quality, prices, offerings, innovation, sustainability, and corporate reputation. New product launches, distribution networks & geographical expansions, joint ventures, and M&As are the key strategies adopted by companies to gain a higher market share.

For instance, in December 2019, Solvay and Anthea, a leading specialty chemical manufacturer in India, established a joint venture i.e., “CATàSYNTH Speciality Chemicals”. Through this, the two-company aimed to start the production of catechol derivatives. Also, it is dedicated to manufacturing and supplying a variety of products, such as helional, heliotropin (piperonal), and methylenedioxybenzene, which are extensively used in agrochemicals, pharmaceuticals, and flavors & fragrances industries. Some prominent players in the global agrochemicals market include:

This report forecasts revenue growth at global, regional, and country levels and provides an analysis of the latest industry trends in each of the sub-segments from 2017 to 2028. For the purpose of this study, Grand View Research has segmented the global agrochemicals market report based on product, application, and region:

b. The Asia Pacific dominated the market and accounted for a 27.2% share of global revenue in 2020. The region is the major producer of agricultural products in the world. Countries such as India, China, and Japan are contributing the majority of the market share in the Asia Pacific agrochemicals market.

b. The agrochemicals market growth is dependent on pest attacks, crop yields, agriculturistsâ€™ awareness level, and capacity to buy products depending on their availability of credit. Increasing demand for insecticides across the globe is also a major factor for market growth.