The global anticoagulant rodenticides market size was valued at USD 680.4 million in 2021 and is anticipated to expand at a compound annual growth rate (CAGR) of 3.3% from 2022 to 2030. The growth of the market is expected to propel by a rising rodent population, increasing frequency of diseases related to rodents, and increased demand for rodent control. The market is extremely competitive in nature, due to the presence of multiple manufacturing companies coupled with rising demand for products that helps in rodent control, from key application industries including household, pest control, agriculture, and others. 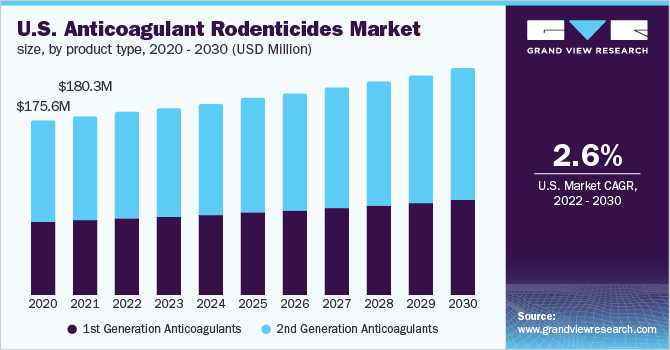 Big manufacturers including Syngenta Crop Protection AG, BASF SE, and BAYER AG, among others manufacturers are intensifying their portfolio of products by developing powders, sprays, and baits with various concentrations of the active ingredients. Rodents consume anything, including waste, scraps, fruits, plants, seeds, grains, and grass. The majority of the rodent’s diet is based on seeds, and some of the rodents are carnivorous too. Spraying on anticoagulant rodenticides is not safer if compared to pellets, powdered, or any form, as it increases the incidents of secondary poisoning in birds and humans.

In addition to being employed by warehouses and pest control businesses, these products are also used in homes, urban areas, and for agricultural purposes. Throughout the forecast period, the market for anticoagulant rodenticides is anticipated to develop as a result of the rising need for rodenticides to reduce the rodent population. During the projection period, it is projected that factors such as rising rat populations, increased need for rodent control, and the availability of natural rodent control products will propel market expansion.

The growing need for effective farming techniques and increased agricultural yields with the use of advanced and new mechanisms are a result of growing worldwide worries about food security. As a result, the application of chemicals has increased to create efficient rodent control solutions. The creation of such goods has placed a strong emphasis on how competitive they are with current market-available traditional rodent control treatments.

Three of the first-generation anticoagulant rodenticides' active ingredients are currently approved for usage in Australia. The Australian Pesticides and Veterinary Medicines Authority has given the go-ahead for the use of diphacinone, coumatetralyl, and warfarin in and around industrial, agricultural, commercial, and residential structures.

The blocks segment dominated the market for anticoagulant rodenticides and accounted for a revenue share of 46.7% in 2021. This high share is attributed to the capacity to withstand the varying climatic circumstances that make them appropriate for outdoor utilization as well. Furthermore, the tendency of rodents to eat solid objects is additionally projected to fuel the need for a block form of anticoagulant rodenticides in the future.

When compared to sprays and powders, the pellet products are more appropriate, as they offer useful control against rats and mice, and are resilient to evolving nature. In the wake of fast urbanization and the spread of rodents in urban areas explicitly in business and private regions, the utilization of pellet anticoagulant rodenticides is expected to expand across the world over the forecast period.

Besides, the products that are available in powdered or crystalline form are somewhat dissolvable in water. These products are otherwise called tracking powder. Anticoagulant rodenticides in powdered form are not utilized in ducting systems as they can spread out in the particles form into the air, as a result, can lead to the contamination of food items.

The companies engaged in pest control dominated the market and accounted for a revenue share of 36.3% in 2021. Its high share is attributable to expanding rodent populace combined with the increasing mindfulness regarding high cleanliness norms. Pest control firms offer their services and products to various clients including agriculture, residential, and commercial offices. Additionally, numerous services in pest management, mainly include making preventive moves for limiting the increasing population of mice and rats. 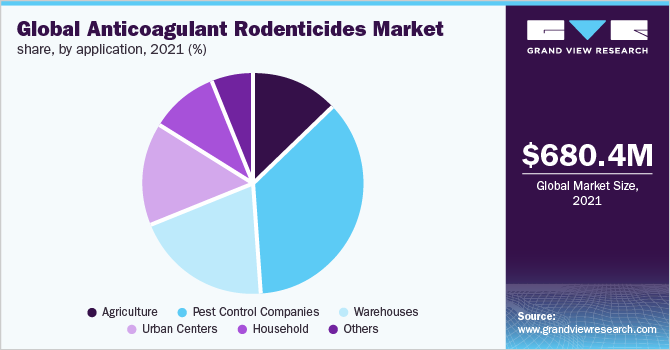 Rodents can make serious harm to food products. In addition, they harm crops and are accountable for spreading more than 60 diseases to livestock, pets, and humans. Rodents contaminate crop yield and stored grains. The damage can lead to food scarcity and crop loss across the world. They can damage various crops by spoilage, contamination, and gnawing. These reasons are, thus, likely to drive the demand for anticoagulant rodenticides.

Increasing the disposable income of working-class families in the arising countries worldwide is one of the significant factors behind urbanization. With rapid urbanization, water transportation methods and their infrastructure face serious infiltration problems. Therefore, the rising mindfulness concerning controlling a large number of rodents in metropolitan areas is probably going to fuel the demand for anticoagulant rodenticides over the forecast period.

North America dominated the global anticoagulant rodenticides market with a revenue share of 31.51% in 2021. This high share is attributed to the growing mindfulness concerning the increased rodent population along with growing concerns regarding security around warehouses, residential and commercial buildings, and farms and monitoring rodents in agricultural fields in countries like Canada, Mexico, and the U.S.

These products utilized in the U.S. are classified as first-generation, second generations, and acute rodenticides based on the mode of action and the harmfulness level. An expansion in the number of rodents across various cities including Washington DC, Los Angeles, San Francisco, New York, and Chicago combined with growing awareness regarding the diseases spread by rodents is expected to fuel the product demand.

New EU guidelines have limited the external usage of products that helps in rodent control. The usage of products is limited to some professionals due to the risk assessment; its execution differs from one country to another. These factors are probably going to expand the demand for multiple services offered by firms engaged in pest control. Rising demand for pest control services along with the existence of many pest control firms are likely to fuel the growth of the overall market in the region.

The rivalry in this market is highly dependent on the geographical spread, many sellers, and the product mix. The product manufacturers are involved in constant R&D to build numerous active ingredients to be used in the creation of anticoagulant-based rodent control products. For instance, in May 2021, BASF SE introduced an anticoagulant rodenticides product ‘Leo Miao’ to curb rodents in the livestock industry. Manufacturing companies are concentrating hugely on enhancing their portfolio of products along with the launch of nature-derived products, intended at keeping pace with future needs for viable development. Some of the prominent players in the anticoagulant rodenticides market include:

This report forecasts revenue growth at global, regional, and country levels and provides an analysis of the latest industry trends in each of the sub-segments from 2018 to 2030. For this study, Grand View Research has segmented the global anticoagulant rodenticides market report based on product type, form, application, and region:

How big is the anticoagulant rodenticides market?

What is the anticoagulant rodenticides market growth?

Which segment accounted for the largest anticoagulant rodenticides market share?

b. Pest control companies dominated the anticoagulant rodenticides application with a share of 36.3% in 2021. Its high share is attributable to the increasing rodent population coupled with the rising awareness regarding high hygiene standards.

Who are the key players in the anticoagulant rodenticides market?

What are the factors driving the anticoagulant rodenticides market?

b. The demand for anticoagulant rodenticides is anticipated to be driven by increased demand for rodent control, the prevalence of rodent-related diseases, and rising rodent population.