The global ballistic protective equipment market size was valued at USD 3.87 billion in 2015. The industry is anticipated to witness sustainable growth over the forecast period on account of growing internal as well as external security threats as a consequence of conflicts between nations along with rising warfare situations. Growing national anti-terrorist attack preparedness in most economies has also dramatically impacted sales of armor wear globally.

North America remained a dominant consumer of armor wear globally with the U.S. being the frontrunner over the past decade. Active involvement of the U.S. military in the Middle Eastern conflicts coupled with threats of fatal attacks from various terrorist organizations over the past few years has fueled the North America ballistic wear market growth. Increasing pressure on the U.S. federal government to sustain itself as a military superpower is also projected to drive the regional industry. 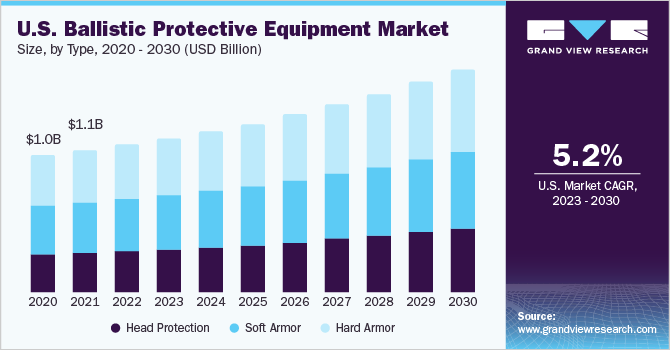 The increasing need for innovative devices and gadgets on account of technological advancement is also anticipated to increase the product demand over the forecast period. The high cost associated with protective equipment is projected to hamper the industry growth over the projected period.

The heavy material weight is affecting the personnel mobility adversely which is also expected to negatively impact the industry growth. Increasing usage of better raw materials to decrease ballistic product weight along with innovation of breathable armor wear is anticipated to create new opportunities for the industry participants for further investments.

Ballistic protection equipment is rapidly being utilized in defense, commercial, law enforcement, and safety applications. The global ballistic protective equipment market is predicted to rise steadily throughout the forecast period, owing to rising external and internal security risks as a result of country wars and increased wartime scenarios.

Growing concerns about enhancing army survivability are predicted to have a favorable impact on market growth. Furthermore, rising defense spending as a result of expanding regional economies, as well as increased rivalry among governments to demonstrate their strength, are likely to fuel market expansion. Additionally, it is anticipated that throughout the course of the forecast period, the market will continue to be driven growing desire for newer gadgets and devices as a result of ongoing technological innovation.

A growth in military combat is increasing the demand for ballistic protection technology to defend the armed personnel. Emerging economies are consistently focused on the replacement of old military equipment and, subsequently, increasing military spending. Such modernization operations provide several prospects for industry participants, leading to the creation of contractual relationships with military organizations.

The global military industry’s investment in R&D operations has accelerated the development of new troop modernization technologies, such as enhanced battle-hard armor, helmets, clothes, and eyeglasses, that will improve sustainability and survivability. Technological advances and rising demand for lightweight body armor are projected to boost the market over the forecast period.

There has been an increase in the number of military conflicts throughout the world in recent years. Examples include the Indo-Pak dispute over Kashmir, the Syrian civil war, the ISIS fight, the confrontation between the United States and North Korea, and the Lebanon conflict. Increasing tensions between countries and across borders have increased demand among various users for ballistic protection items such as helmets, bulletproof vests, shields, armored automobiles, eyeglasses, and missiles.

The company is providing a larger budget for nuclear ammunition and missiles, but a smaller budget for developing ballistic protection, which may impede market growth during the projection period. Furthermore, the high cost of ballistic protective equipment and the heavy equipment weight are key factors influencing mobility unfavorably and are projected to hamper the market growth.

The major raw materials include a powder mixture of ceramics & metallic compounds, fabrics, and other high performance materials such as carbon polymers, steel, and titanium. Aramid fiber emerged as the leading raw material segment and accounted for over 33% of the total revenue in 2015. The ability of the aramid fiber and relative blends to be easily molded for manufacturing ballistic helmets and body armor is the key factor responsible for high market penetration.

Ultra-high molecular weight polyethylene (UHMWPE) is anticipated to emerge as the fastest-growing material segment with an estimated CAGR of 4.6% from 2016 to 2025. The finished products are majorly used across the defense industry for personnel protection and tactical armor wear, owing to their very high impact strength and excellent stab resistance. Excellent mechanical properties that tend to decrease time spent in material molding and cutting, thus enhancing faster manufacturing on short delivery time periods are the major factors expected to drive the segment growth over the forecast period.

The majority of the recent developments were focused on the use of composites consisting of carbon nanotubes, graphene, and other nanomaterial for providing lightweight with enhanced protection from high-velocity projectiles to the protective wear is anticipated to increase the composite material growth, especially from hard armor segment.

Helmets are anticipated to emerge as the fastest-growing end-use and gain product share by 1.1% by 2025. Increasing head protection equipment demand by counter-terrorism units, terrestrial army, military sniper teams, and infantry combat are anticipated to drive the segment growth over the next nine years.

Hard armor is projected to account for the highest proportion of expenditure especially due to the rising demand for body armor and personal protection from Brazil over the next few years. Brazilian law enforcement and military sectors are moving towards upgrading their armor and ammunition inventory for tackling domestic crime and terrorism which is anticipated to increase the hard armor demand in the region over the forecast period. 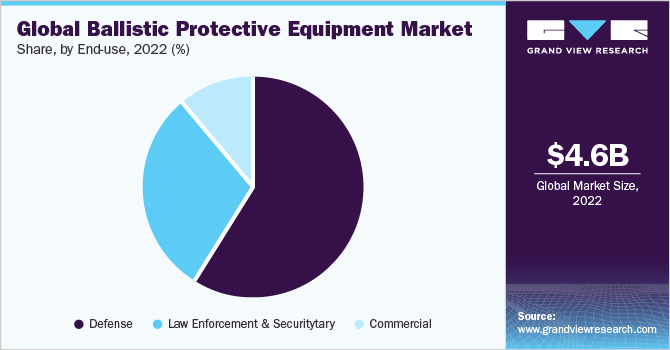 Ballistic protective equipment demand in the law enforcement industry was valued at USD 1,258.5 million in 2015 and is anticipated to emerge as the fastest-growing end-use segment, which can be attributed to the increasing adoption of efficient bulletproof equipment such as shields, body armor, and helmets to counter the civil unrest and riots.

The Asia Pacific region was the fastest-growing region with a CAGR of 4.7%. The threat of terrorist attacks, radical groups, and individuals espousing support for the ISIL and the terrorist from Iraq and Syria is anticipated to fuel the demand for ballistic protective equipment over the forecast period.

Major nations in the Asia Pacific BPE market include China, Japan, India, and Australia. The Australian government has taken significant steps to combat terrorism, including increasing funding for intelligence agencies and improving their ability to access communications data, as well as increasing spending on personal protective equipment, which will drive the ballistic PPE market in Australia.

This report forecasts revenue growth and provides an analysis on the industry trends in each of the sub-segments from 2014 to 2025. For the purpose of this report, Grand View Research has segmented the global ballistic protective equipment market on the basis of material, product, end-use, and region: