The global battery energy storage systems market size was valued at USD 3.4 billion in 2019 and is projected to witness a compound annual growth rate (CAGR) of 27.2% over the forecast period. Rising demand for reliable and continuous power supply from end-use sectors such as industrial, telecom, data centers, marine, and medical are expected to strengthen the market over the forecast period. 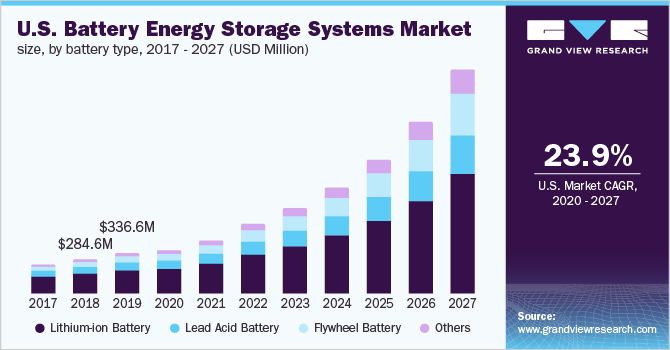 Battery energy storage systems help the electricity suppliers to save excess power for later use, thereby improving the grid flexibility and reliability in terms of power generation, transmission, and distribution. Moreover, demand for uninterrupted power is expected to grow exponentially owing to continuous population growth, infrastructure development, and rapid industrialization over the coming years.

In the U.S., the market is projected to witness prominent growth on account of an increasing number of battery energy storage system manufacturers across the country. For instance, U.S. based electric services company NextEra Energy has integrated a 10-MW capacity battery storage with a large scale solar power plant, providing clean energy through a solar-plus-storage facility.

The cost of lithium ion batteries has decreased by 80.0% between 2010 to 2019 reaching approximately $200/kWh for small installations and is predicted to reach $96/kWh within the next seven years. Lithium-ion batteries offer the best option today in terms of cost, performance, calendar and cycle life, and technology maturity.

While lead-acid batteries have a high Manufacturing Readiness Level (MRL) and Technology Readiness Level (TRL), their cycle life is limited, leading to a life of fewer than 3 years assuming one cycle per day. Flywheel batteries are comparatively new technology and advancements are being made to compete with other battery technologies. However, with further reduced cost and technological up-gradation, flywheel battery storage is anticipated to grow in the coming future.

The presence of other battery energy storage technologies in the market can be a major obstacle to market growth. In addition to batteries, energy storage can also be performed in a variety of ways such as electrical, thermal, and mechanical energy. Electrical energy storage devices include capacitors and superconductors. Mechanical includes technologies such as hydropower, pumped storage, flywheel, and compressed air storage (CAES). Pumped Storage use electricity to pump water into elevated tanks, which can be used to drive hydroelectric turbines when electricity is needed. The United States has more hydroelectric pumped storage capacity than the battery storage capacity.

Flywheels can be used to store energy by accelerating the rotating mass using an electric motor and later rotate the turbine to generate electricity. To reduce loss, the mass rotates in a housing with little friction. Flywheels are ideal for performance-oriented applications that require many charge and discharge cycles.

The data center application segment held a market share of 37.3% in 2019 and is expected to ascend with a prominent CAGR over the forecast period. Uninterruptible power supply is of utmost importance in data centers. The losses incurred due to power failure are huge. In the U.S. alone, around USD 50.0 billion are annually lost due to power failures and related problems.

Irregularities such as energy dips and spikes can adversely affect the equipment at data centers, resulting in losses. A line-interactive UPS system can also act as a filter that refines power that comes into the UPS, adjusting the output so that the internal systems receive a consistent and uninterrupted supply.

Others segment is expected to witness a significant CAGR of 28.0% over the forecast period. Growth of renewable energy with the deployment of numerous wind and solar energy projects over the past years is expected to augment product demand over the forecast period. In addition, there is a huge potential for growth in micro-grid development for military and disaster relief in the economy. In addition, rapid development in grid storage infrastructure and supportive government regulations are likely to have a positive impact on the growth of the market for battery energy storage systems. 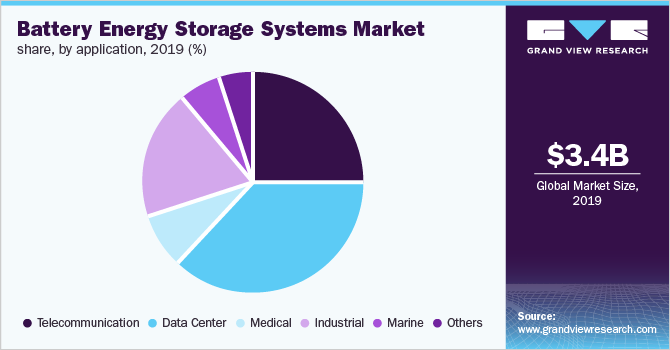 Lead-acid battery occupies the second-largest revenue share in the market for a battery energy storage systems. The lead-acid batteries are relatively cheaper as compared to other batteries and are easily manufactured with relatively low technology equipment, which in turn will drive system growth in the near future. However, the emergence of alternative battery technology such as Li-ion and volatile raw material prices are expected to hamper the growth of the segment over the next seven years.

Flywheel battery technology is expected to witness the fastest growth on account of continuous uninterrupted power supply to the grid along with the instant response, frequency regulation, and quality improvement in terms of electricity. Flywheel batteries are more economical than other battery solutions. The main reasons for this are the long service life and low maintenance costs of the flywheel compared to the battery, which compensates for the higher purchase costs at the beginning of the installation.

The market in Asia Pacific occupied a significant revenue share of 41.9% in 2019. Rapid population growth has led to increased power demand across developing economies. Grid operators are deploying battery energy storage systems to prevent power outages and enhance grid flexibility over a period of the next seven years.

In addition, countries in the Asia-Pacific region such as China, Japan, India, South Korea, Australia, and others are showcasing rapid population growth and urbanization, which tends to increase the electricity demand. Hence, uninterrupted power supply demand is increasing which augments the growth of battery energy storage market in the region during the forecast period.

China emerged as the largest country in the Asia-Pacific region in terms of deployment of battery energy storage in 2019. China battery energy storage market will grow in size due to lower technology costs and increased technological advancement. The unit price of lithium batteries has halved in recent years as compared to industry benchmarks and will continue to follow the trend in future. In addition, manufacturing economies of scale, combined with innovative business cases, will drive industry growth.

North America occupies the second-largest share in the market for battery energy storage systems, with the U.S. being the major contributor to regional growth. Owing to the growing number of utilities and corporations, energy storage has been cornerstone of all energy planning in the U.S., and safety of these energy storage systems is among the top priorities of industry leaders. The explosion at an Arizona Public Service facility propelled the need for standardized safety regulations for storage technology of energy storage system integration and monitoring.

Key companies are indulging in organic and inorganic growth strategies to enhance their foothold in the market through diversification of their product offerings. Some of the prominent players in the battery energy storage systems market include:

This report forecasts revenue growth at global, regional, country levels and provides an analysis of the latest industry trends in each of the sub-segments from 2016 to 2027. For the purpose of this study, Grand View Research has segmented the global battery energy storage systems market on the basis of application, battery type, and region: