The global beer market size was valued at USD 680.9 billion in 2021 and is expected to expand at a compound annual growth rate (CAGR) of 7.0% from 2022 to 2030. Beer consumption patterns have shifted dramatically, with declining consumption in traditional drinking countries and high gains in emerging markets and places where wine and spirits were traditionally consumed. These changes have resulted in the convergence of global alcoholic beverage consumption habits and a rapid rise in beer sales. 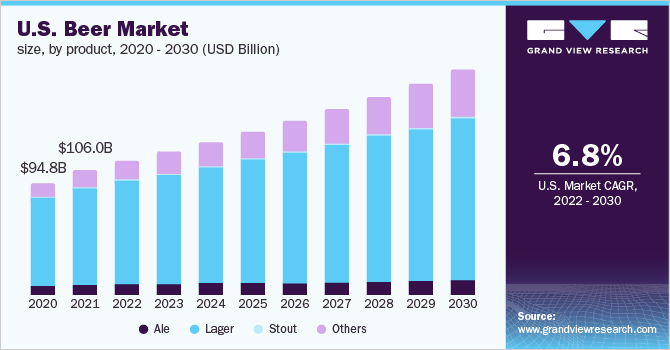 Flavors play a significant role in shaping consumption trends. Consumers today are significantly more flexible and open to experimenting. Beer is a generational product category, which means every generation associates it with different flavors and occasions. This knowledge of consumer preferences has aided brands in forging strong bonds with their customers. Taprooms are becoming increasingly popular as they allow customers to try new flavors and provide their inputs, which helps to crowd-source beer innovations.

Furthermore, increased expenditure on ads and marketing is expected to further accelerate the growth of the global market. According iSpot.tv, the ten largest beer brands in the U.S. have spent nearly USD 525.8 million on TV ads in 2021. This was a monumental 49% increase from 2020 spending which stood at USD 352.4 million. For instance, Modelo was the highest spender in the list, incurring a cost of more than USD 67.9 million on ads in 2021- almost USD 30 million more year than in 2020.

The industry is seeing an enormous surge in demand for craft beer. Young drinkers prefer craft beer as it offers a variety of styles and taste profiles. Artisanal beer is becoming increasingly popular. Craft breweries are known for their frequent experimentations with different ingredients to give a distinct flavor. For example, Miami Brewing Company makes unique brews with exotic tropical fruits found in South Florida and the Redlands.

Increased beverage consumption has sparked fierce competition among beer brands, leading to the creation of new flavors and increased consumption. Craft beers are gaining popularity because they offer a variety of flavors in addition to those given by macro breweries. Craft beers with unique ingredients and innovative flavors that combine salty, fruity, and tart flavors are gaining popularity among millennials throughout the world. Some of the larger brewers are also taking action in response to shifting customer needs.

The lager segment dominated the market, holding approximately 76% of the overall revenue in 2021, and this trend is expected to continue over the forecast period. The lager market is fueled by factors such as increased demand for lager over ale and increased supply of the product. Furthermore, the market is predicted to develop due to an increase in the production of lager in different flavors. Due to its strong demand, regular lager is becoming more popular than premium lager.

The bottles segment dominated the market, holding approximately 46% of the overall revenue in 2021, and is expected to maintain the trend over the forecast period. Glass bottles help maintain the carbon dioxide content of the beer for a longer period, ensuring that the product’s taste and quality are not compromised. Consumers believe that drinking beer out of glass bottles gives a higher satisfaction compared to other products. This has led to the segment enjoying a major market share.

However, with the rising focus on sustainable packaging, and the growth of other small-scale independent brewers, the cans segment is expected to register the fastest CAGR during the forecast period. Wide availability and discounted prices on cans in the grocery stores and mass merchandisers are also likely to drive the market for this segment. Usually, beer is discounted when purchased in packs of 6, 8, and even a crate of cans. These trends will drive segment growth.

Macro brewery dominated the market, holding approximately 67% of the overall revenue in 2021, and is expected to maintain the trend over the forecast period. The highly consolidated market for beer is the main reason for the dominance of this segment over the years. According to brewery figures, four businesses control more than half of the global market and are considered the world's largest breweries. These are Anheuser-Busch InBev, China Resources Snow Breweries, Heineken, and Carlsberg Breweries A/S.

According to the sales data provided by the Guardian and Food and Water Watch analysis, Anheuser-Busch InBev accounted for 42% of all beer consumed in America in 2020. These huge brewers have a strong global presence and export their products to customers all over the globe. Anheuser-Busch is the world's largest brewery. The huge-scale operations of these players can be attributed to the dominance of macro breweries in the global market.

Though off-trade distribution held a slightly higher market share of 53% in 2021, on-trade distribution is expected to be a faster-growing segment in the global market over the forecast period. On-trade is sold at establishments such as pubs, nightclubs, restaurants, and bars rather than in supermarkets. On-trade beer consumption is less than half the volume for off-trade, yet it generates more than half of the revenue for beer firms. This is because on-trade channels charge a premium for their services, ambiance, and amenities. 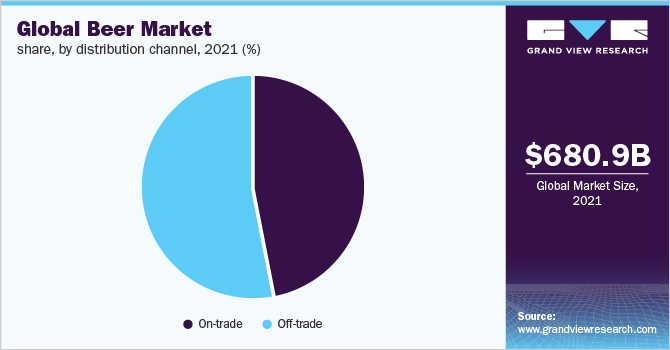 Due to the COVID-19 pandemic, off-trade consumption gathered momentum. In 2020, several on-premise retail outlets such as pubs, restaurants, hotels, stadiums, and event centers closed, resulting in a dramatic drop in draught beer sales. This led to a shift in the consumption of beer at home. However, this trend will be short-lived as economic activities throughout the world open up, and consumption will again shift to on-trade premises.

Asia Pacific held the largest market share, accounting for around 35% in 2021. This growth has been driven by urbanization and rising purchasing power. For the 11th year in a row, Asia had the highest annual beer consumption in the world. China continues to be the largest consumer in Asia Pacific, with a 36% share. It is the world's second-largest beer consumer, after the U.S. Further, China’s market is slowly moving toward maturation with almost all the population being fully aware of the different beer varieties.

Asia Pacific is predicted to be the fastest-growing region at a 7.3% CAGR from 2022 to 2030. This growth is expected to be aided by strong sales growth in Vietnam, India, and the Philippines. The industry in India is expected to see the entry of new players, for instance, B9 Beverages Pvt. Ltd, which makes Bira 91, is set to launch new beers and relaunch existing variants. Due to increasing disposable incomes, rising preference for low-alcohol beverages, and progressive social acceptance, India’s beer market has been growing.

The market is consolidated with the four major players occupying more than 50% of the overall share. These players are acquiring smaller and independent regional brewers, resulting in consolidation. Recent examples include the 2021 creation of Carlsberg Marston’s Joint Brewing Company, the 2019 takeover of Greene King (then the U.K.’s largest independent brewer) by Hong Kong asset company CK Asset Holdings, and the takeover of Fuller’s by Japanese brewer Asahi Group Holdings, Ltd.

Some prominent players in the global beer market include: -

This report forecasts revenue growth at global, regional, and country levels and provides an analysis of the latest industry trends and opportunities in each of the sub-segments from 2017 to 2030. For this study, Grand View Research has segmented the global beer market report -based on product, packaging, production, distribution channel, and region:

How big is the beer market?

What is the beer market growth?

Which segment accounted for the largest beer market share?

b. The Asia Pacific dominated the beer market with a share of 35.2% in 2021. This is attributable to China being the largest country in the region consuming beer.

Who are the key players in beer market?

What are the factors driving the beer market?

b. Key factors that are driving the beer market growth include demand for low-alcoholic drinks among the millennials and Gen Z and also a reduction in the consumption of spirits world due to their high alcohol content.

Consumersâ€™ lifestyles, notably drinking habits, have changed as a result of the COVID-19 pandemic. The lockdowns negatively impacted alcohol sales at bars, pubs, restaurants, and nightclubs. However, at-home alcohol consumption grew, and sales in retail and online stores increased significantly. The report will account for COVID-19 as a key market contributor.