The global bioburden testing market size was valued at USD 727.0 million in 2018 and is expected to witness lucrative CAGR of 13.7% over the forecast period. Growing pharmaceutical, biotechnology, medical device, and food and beverage industries is expected to drive the growth. 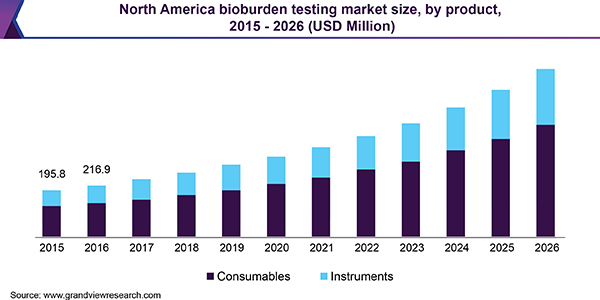 Various government authorities are also increasingly getting involved in issuing guidelines and microbial contamination prevention strategies, which is anticipated to promote bioburden testing, thereby contributing to the market growth. In addition, a number of publications released by the organizations to promote awareness regarding safety testing tools is broadening the future growth prospects.

Consumables segment dominated the bioburden testing market in 2018 due to the repetitive use of these culture media, reagents, and kits. The solid and liquid culture media for detecting aerobic microorganisms are manufactured based on the harmonized standards of the U.S., European, and Japanese Pharmacopeias.

Instruments segment held significant market share in 2018 due to the availability of advanced technologies for rapid microbial testing. The segment is broken down into two categories, namely, automated microbial identification systems and PCR instruments. Advancements in PCR instruments are expected to further drive the segment growth over the forecast period.

Aerobic count testing generated the largest market share in 2018 due to its wide application for determining the total bacterial population on a sample. In addition, it is used for sanitary inspection and organoleptic check especially food products. Anaerobic count tests, on the other hand, are also necessary, as anaerobic bacteria are common causes of infection.

Bioburden testing is classified into two phases. In the first phase, quantitative analysis of total number of aerobic bacteria, mold, and yeast are identified. In the second phase, a qualitative analysis is conducted wherein the presence or absence of specified microorganisms is determined. Spore count tests are also used for determining the bioburden percent recovery, thus, can be considered as an alternative to the aforementioned testing types.

Raw material testing dominated the market with the highest revenue share in 2018 due to the rising quality standards to maintain the safety of final goods and services. Pharmaceutical, biotechnology, and food and beverage manufacturers are continuously enhancing the quality of the finished products through and rigorous bioburden testing of raw materials.

Medical device testing also held significant shares in 2018. It helps measure the total microbial count on medical devices as a pre-sterilization quality control method before their final use or implantation. In-process material tests, on the other hand, are performed to identify the quality, strength, and purity of products during manufacturing process. The sterilization validation test works with the identification of the number of bioburden to set the sterilization dose for quality control.

Pharmaceutical and biotechnology companies is the largest revenue generating segment, due to the booming pharma and biotech industry and rise in the number of drug manufacturing. In addition, rising government support for pharmaceutical and biotechnology industries is expected to drive the growth. Rise in the number of medical device manufacturers is also anticipated to propel the overall market growth in the forthcoming years. 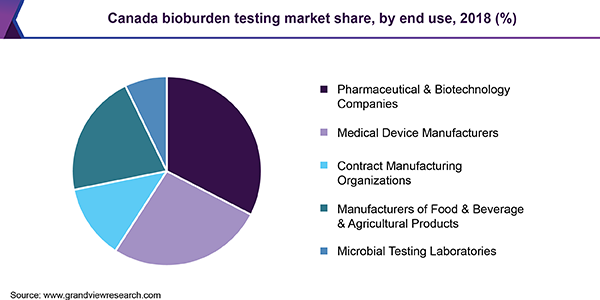 North America held the largest revenue share in 2018 due to the rise in R&D investments by pharmaceutical and biotechnology industries. In addition, development of new biologics, vaccines, and drugs in U.S. is creating high demand for bioburden testing services. The medical devices sector in U.S. is also booming owing to the technological advancements. this factor is anticipated to bode well for the regional market growth in near future.

The lucrative growth registered in Asia Pacific market for bioburden testing is believed to be an outcome of the rise in awareness pertaining to the benefits of biological safety testing tools. Some other factors driving the growth include growing healthcare spending, demand for better infrastructure in laboratory and clinical research, and adoption of compact and low-cost techniques in clinical research.

Key companies engage in strategic initiatives, such as geographic expansion, product development, and mergers and acquisitions. In addition, technologically advanced products manufactured by the key players are driving the demand. For instance, Milliflex Quantum by Merck Millipore are advanced filters for rapid bioburden detection. These are faster and more reliable methods compared to the traditional bioburden testing methods.

This report forecasts revenue growth at global, regional, and country levels and provides an analysis of the latest industry trends and opportunities in each of the sub-segments from 2015 to 2026. For the purpose of this study, Grand View Research has segmented the global bioburden testing market report on the basis of product, test type, application, end use, and region:

How big is the bioburden testing market?

What is the bioburden testing market growth?

Which segment accounted for the largest bioburden testing market share?

b. North America dominated the bioburden testing market with a share of 36.7% in 2019. This is attributable to rise in R&D investments by pharmaceutical and biotechnology industries, development of new biologics, vaccines, and drugs in U.S., and technological advancements.

Who are the key players in bioburden testing market?

What are the factors driving the bioburden testing market?

b. Key factors that are driving the market growth include growing pharmaceutical, biotechnology, medical device, and food and beverage industries and rise in government initiatives to promote bioburden testing tools.