The global biocides for leather market size was valued at USD 468.1 million in 2020 and is expected to expand at a compound annual growth rate of 5.0% from 2021 to 2028. The demand is anticipated to be majorly driven by the increasing usage of high-quality leather products in several industrial applications such as footwear, automotive, apparel. 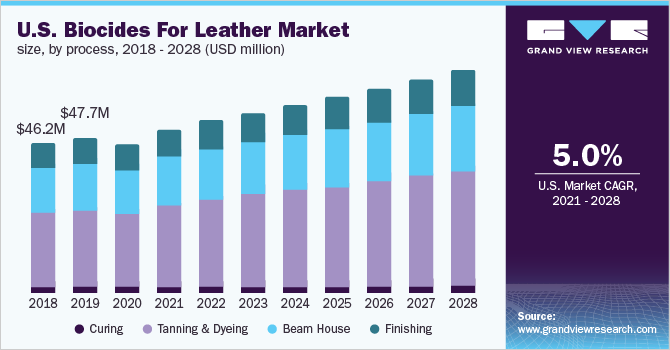 The biocides for leather is expected to suffer major losses owing to the global outbreak of COVID-19 in the year 2020. Several major leather manufacturing countries majorly hit by the pandemic are India, Russia, Italy, Germany, Brazil, the U.K., and the U.S. The governments in these countries have imposed major lockdowns leading to the temporary closure of major manufacturing units and disruption of trade routes. This led to severe losses for leather industry.

The global market is estimated to witness a volume-based CAGR of 3.6% from 2021 to 2028. This growth can be attributed to several factors such as the development of technologies for product diversification, high investments in R&D, application expansion, enhanced performance, innovation, and increasing automotive production. Furthermore, mounting demand for bio-based alternative products is expected to provide lucrative opportunities as a result of stringent regulations and environmental standards in several developed regions such as Europe, North America, and others.

Biocides are highly scrutinized by various government agencies such as the Environmental Protection Agency (EPA), the U.S. Evaluation, Authorisation and Restriction of Chemicals (REACH) as, biocides pose an imminent threat to humans, animals, as well as the environment when used above the prescribed limits.

The market is highly regulated by various government authorities and environmentalists worldwide since biocides can degrade the environment as well as animal and human health if used in excess or for a prolonged period. However, with advancements in technology by key multinationals across the globe, in terms of product development and operational efficiency, the demand for biocides is expected to increase for a broad spectrum of applications in the leather industry.

In terms of volume, the fungicides product type segment dominated the market and accounted for the largest share of 88.2% in 2020. This high share is attributable to good performance even at fewer dosages and is to be useful in controlling bacteria and fungi in tanneries. Biocides are increasingly being used as fungicides and bactericides to avoid the buildup of fungi, bacteria, and other microbes during several important steps such as soaking, pickling, tanning, cleansing, and finishing in the leather production process.

Several research studies have been conducted for developing plant-based fungicides as a replacement for hazardous chemical biocides for application in the leather industry. For instance, Ege University in Turkey conducted a study on the usage of Origanum plants extraction of essential oils and found that the essential oil derived from this plant demonstrates antifungal properties during the pickling process and this effect can be improved with an increase in concentration.

Biocides such as bactericides are generally used in tanning processes to protect the substrate against bacterial growth and attack. Bactericides are often used in the tannery for the preservation of soaking rather than curing the hides.  Didecyldimethylammonium chloride, a quaternary ammonium salt, is biodegradable and exhibits low toxicity. Some of the prominent players offering bactericides include Synmac Chemicals Pvt Ltd., Buckman, and Indofil Industries Limited.

The tanning and dyeing process segment dominated the market and accounted for the highest volumetric share of 49.7% in 2020. This high share is attributable to the major use of the bactericides in the tanning process in order to protect the substrate against bacterial growth and attack. Biocides applied in tanning applications are non-oxidizing biocides, such as isothiazoles, quaternary ammonium compounds, and halogenated organic compounds, in an amount of about 0.1 to 0.5% by mass of rawhide. The amount used can also vary depending on the quality of biocides. The demand for biocides in the leather is expected to be driven by the growth in the global leather industry. 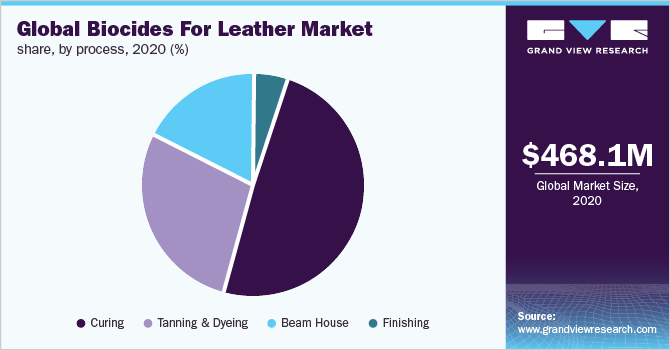 Biocides are often found in wastewater, left out after the tanning process, which is usually flushed down by leather manufacturers to the nearby water bodies leading to an increase in toxicity levels. Due to this, regulations have been laid down as per the European Union’s Biocidal Products Directive (BPD) that regulates the number of biocides used by leather industries.

The beamhouse operations have the second-largest share in the biocide industry involved in the preparation of hides for tanning processes. It involves cleaning of hides by removal of hairs and animal flesh, without disturbing the required moisture content of hides. It involves two processes namely soaking and liming. In the soaking stage, hides are placed in clean water in drums and paddles for the removal of salts that were used in the curing process. These processes eliminate microbes and ensure acceptable levels of desirable microorganisms.

Asia Pacific dominated the biocides for leather market and accounted for the largest revenue share of 38.4% in 2020. The high share is attributable to the abundant availability of raw materials and the high concentration of leather manufacturers present in the region. One of the major factors driving the demand for leather products in the region is low-cost labor. China is one of the largest leather producers as well as exporters in the world. Leather production in China reached nearly 6.2 billion sq. ft. in 2020, as stated by the China Leather Industry Association (CLIA), accounting for nearly 25% of the annual global leather production.

Japan is one of the prominent markets for footwear and luxury consumer goods imports on account of which the penetration of leather chemicals in the country’s leather industry is moderate. However, the automobile industry in Japan is well-established and accounts for a large-scale consumption of leather. Rising demand for leather products from automobile industry is likely to emerge as the major driving factor for leather chemicals such as biocides in the country.

The market growth in the Central & South America region is primarily driven by the rapidly flourishing leather industry along with increased leather exports. The presence of major leather producing countries such as Brazil and Argentina among others is anticipated to positively impact leather production in the region, which, in turn, is anticipated to drive biocide production in the region over the forecast period.

The market in the European region is anticipated to be driven by the increased demand for leather chemicals and growing demand for leather from end-use industries such as footwear, automotive upholstery, and textiles. Hence a significant demand for biocides is observed from these industries. After the economic downturn, the governments in the region are focusing on low-cost and bio-based products with high durability. As a result, the demand for bio-based leather chemicals is expected to propel in the region over the coming years.

Continuous increase in stringent regulations related to chemicals production in several countries specifically in North America and Europe regions has resulted in added manufacturing costs as it is very expensive to get fungicides approved by regulatory agencies and it takes a long time to complete the required testing.  This has ultimately resulted in a business incurring losses which have led players to divest their business.

Key players in the market such as Buckman and Lamirsa undertaking R&D activities to enhance product qualities and reduce harmful impacts created by them. Additionally, manufacturers are increasing their R&D activities on obtaining biocides, which create minimal or less impact on the environment. Some of the prominent players in the biocides for leather market include:

This report forecasts revenue growth at global, regional, and country levels and provides an analysis of the latest industry trends in each of the sub-segments from 2017 to 2028. For the purpose of this study, Grand View Research has segmented the global biocides for leather market report on the basis of product type, process, and region:

How big is the biocides for leather market?

What is the biocides for leather market growth?

Which segment accounted for the largest biocides for leather market share?

b. Europe dominated the biocides for leather market with a share of 38% in 2020. The market in the region is anticipated to be driven by the increased demand for leather chemicals and growing demand for leather from end-use industries such as footwear, automotive upholstery, and textiles.

Who are the key players in biocides for leather market?

What are the factors driving the biocides for leather market?

b. The rising use of leather is expected to fuel market growth.