The global biomass power market size was valued at USD 121,340.76 million in 2021 and is projected to exhibit a compound annual growth rate (CAGR) of 6.0% from 2022 to 2030. The market has been witnessed growth with the rise in environmental concerns, which has forced various countries to increase the share of renewable energy in their power mix. Countries, such as India, China, Germany, the U.K., and France, have announced renewable energy targets and are aiming at becoming carbon-neutral nations in the future. Moreover, rising adoption owing to favorable policies and regulations drives the market. 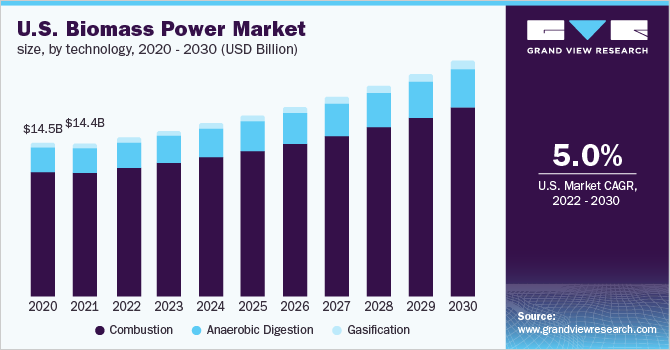 Furthermore, the European Union countries are looking for a coal phase-out, which is expected to boost the demand for biomass power. In addition, in countries, such as India, the U.S., and China, co-firing of coal-based power plants is done with biomass feedstock to limit carbon emissions from the plants. These factors will boost the growth of the market in the forecast period. The U.S. witnessed biomass power capacity addition of 177 MW in 2019 through 14 projects. The new project commissioned in 2019 was done in locations, such as Florida, Georgia, California, and Hawaii. Furthermore, over 384 MW of biomass power projects are under different development phases in the country. These factors are anticipated to boost the market growth in the country over the forecast period.

The U.S. and Canada dominate the North America regional market. The North America region is majorly dependent on coal for power generation. The recent discovery of shale gas reserves in the region has resulted in gas-based power generation, which is gaining higher growth over coal-based power generation in the region in the past decade.Installers and system providers usually hold stock of major equipment in inventory. However, manufacturers faced bottlenecks and shortages owing to limited production in countries during the COVID-19 crisis. Furthermore, upcoming biomass power projects witnessed delays in commissioning due to the disruption in the supply chain and halt of on-site construction activities caused by the imposition of lockdowns in severely affected areas.

On the basis of technologies, the global market for biomass power has been further categorized into combustion, gasification, and anaerobic digestion. In terms of revenue, the combustion segment dominated the market in 2021 and accounted for the maximum share of more than 88.0% of the global revenue. The trend is expected to continue in the future with the segment registering a steady growth rate over the forecast period. Biomass feedstock is directly combusted in a furnace with air, to convert water into steam. The produced steam is used to drive a steam turbine to generate electricity.

On the basis of feedstock, the global market has been further segmented into solid biofuel, liquid biofuel, and biogas. In terms of revenue, the solid biofuel segment accounted for the maximum revenue share of 85.5% in 2021. The segment will expand further at a steady CAGR retaining its leading position throughout the forecast period. The easy availability and low cost of solid biofuelshave resulted in their higher adoption over liquid biofuels and biogas for power generation applications. On the other hand, the liquid biofuel segment is projected to record the fastest growth rate during the forecast period. 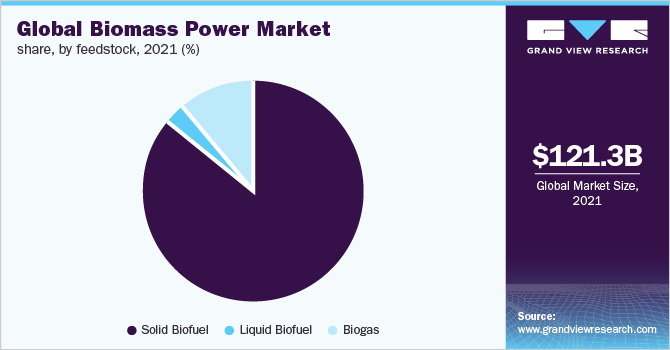 The biogas segment accounted for the second-largest market share, in terms of revenue, in 2021 owing to its higher calorific value and ability to be produced and utilized in remote areas. The segment is expected to grow at a steady growth rate during the forecast period. Biogas is majorly composed of methane and carbon dioxide, which is produced by the process of anaerobic digestion and it can be also produced through the thermal process of solid biofuel. Biomass power can be utilized for various applications, such as power generation, heating, and cooking.

The global market is highly competitive due to the presence of major companies. The industry faces a complex supply chain interface where the industry participants need to interact with local and regional players to ensure a continuous supply of biomass feedstocks, conversion, transportation, and delivery of the valuable fuels to the end-user segment. Moreover, the market participants are emphasizing intensive research and development activities to further commercialize the various types of biomass power generation technologies. Some of the prominent players in the global biomass power market include:

This report forecasts revenue growth at global, regional, and country levels and provides an analysis of the latest industry trends in each of the sub-segments from 2019 to 2030. For the purpose of this study, Grand View Research has segmented the global biomass power market report on the basis of technology, feedstock, and region:

How big is the biomass power market?

What is the biomass power market growth?

Which segment accounted for the largest biomass power market share?

Who are the key players in the biomass power market?

What are the factors driving the biomass power market?

b. Key factors driving the biomass power market growth include the minimize dependence on fossil fuels, reduce greenhouse gas emissions, and improving the security of the energy supply.