The global biopharmaceutical excipients market size was valued at USD 2.1 billion in 2020 and is expected to expand at a compound annual growth rate (CAGR) of 6.5% from 2021 to 2028. Excipients play an essential role in biopharmaceuticals by helping the efficient binding of ingredients, modifying the solubility and bioavailability of API, and increasing drug stability in the dosage form. Hence, selecting the right excipient is important for reducing the manufacturing costs and helps in improving the patient’s experience. 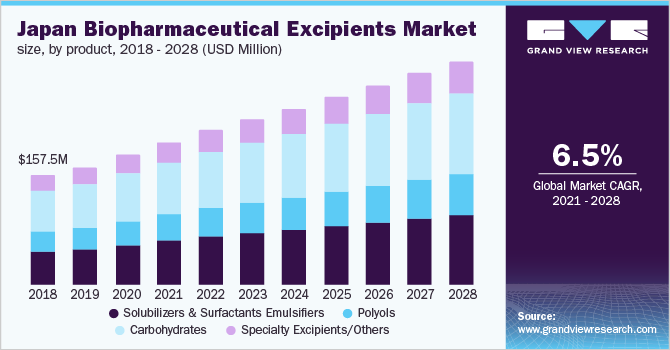 The selection of the right excipient helps in overcoming several challenges associated with biopharmaceuticals. For instance, there are several drugs such as protein-based drugs that are commonly associated with the instability that requires the process of lyophilization.  However, lyophilization is a highly time and energy-consuming process. Hence, the incorporation of drug-specific excipients contributes significantly to maintaining the stability of a biologically active ingredient which indirectly affects the time needed for lyophilization.

In addition, the gaining popularity of multi-functional biopharmaceutical excipients is further driving the market growth. They are effective and efficient in improving the manufacturing process for biopharmaceuticals. The associated advantages include reducing operating costs, enhancing productivity, and improve product quality. The success of COVID-19 vaccines largely relies on their efficacy that can be improved by using efficient drug delivery systems; this offers immense lucrative opportunities for the market entities.

For instance, in February 2021, Innophos released a whitepaper on such formulations in tableting owing to its several advantages such as reducing tablet size, simplifying labels, enhancing compressibility, and increasing manufacturing efficiency. There are several complexities associated with manufacturing biopharmaceuticals. The companies are increasingly reliant on external suppliers for biopharmaceutical excipients, hence the disruption in the supply chain will adversely affect the market growth. However, the restructuring of the supply chain will ensure robust and reliable manufacturing and quality assurance.

North America represented the largest market share of 32.1% in 2020; growth in the region can be attributed to several factors such as the presence of key players, increasing drug development, and a large population base.

Carbohydrate-based excipient products dominated the market in 2020, with a share of 36.2%, and this trend is expected to continue through the forecast period. The extensive use of starch, sucrose, and dextrose in various drug formulations can be primarily attributed to the dominant share of the segment. In addition, the increasing adoption of carbohydrates as bulking agents for assisting in the process of lyophilization for biomolecules such as proteins is further contributing to segment growth.

The starch segment is expected to witness the fastest CAGR of 6.6% owing to its wide application in drug development. It can act as an efficient binder, diluent, and disintegrant that can be used for various non-prescription medications, biopharmaceuticals, and food supplements. The increasing application of starch is owing to its advantages such as cost-effectivity, inert nature, and high availability.

The polyols segment is expected to witness a lucrative growth rate of 6.7% from 2021 to 2028. The growth in the segment can be attributed to the increasing protein therapeutics. Polyols are added in protein formulations for increasing tonicity and stability. Moreover, it has also been shown to offer greater thermodynamic stability which is highly essential for protein-based formulations. 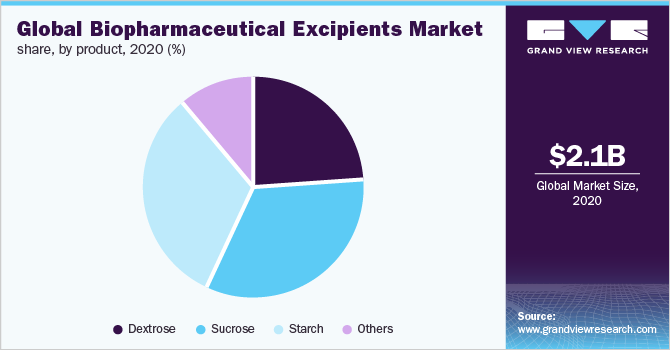 Companies are launching new and advanced excipient solutions for supporting pharmaceutical drug development. For instance, in April 2020, DFE Pharma launched a new portfolio of biopharmaceutical excipients for stabilizing biologics. BioHale, the new range of excipient portfolio, consists of the highest purity excipients that can be used in the formulation. It contains BioHale Sucrose and BioHale Trehalose that is currently under development and will be available through online sales. Some of the prominent players in the biopharmaceutical excipients market include:

This report forecasts revenue growth at global, regional, and country levels and provides an analysis of the latest industry trends in each of the sub-segments from 2017 to 2028. For the purpose of this report, Grand View Research has segmented the global biopharmaceutical excipients market report on the basis of product and region:

How big is the biopharmaceutical excipients market?

b. The global biopharmaceutical excipients market size was estimated at USD 2.07 billion in 2020 and is expected to reach USD 2.26 billion in 2021.

What is the biopharmaceutical excipients market growth?

Which segment accounted for the largest biopharmaceutical excipients market share?

b. Carbohydrates dominated the biopharmaceutical excipients market with a share of 36.16% in 2020. This is attributed to the wide use of sucrose, starch, and dextrose across drug formulations along with the rapid adoption of carbohydrates as bulking agents.

Who are the key players in the biopharmaceutical excipients market?

What are the factors driving the biopharmaceutical excipients market?