The global blood collection market size was valued at USD 8.50 billion in 2018 and is projected to register growth at a CAGR of 6.6% over the forecast period. Increasing prevalence of infectious diseases, a mounting number of accident & trauma cases, and non-communicable diseases are the major factors contributing towards the market growth.

According to the World Health Organization 2018 statistics, each year approximately 15 million mortality cases of age group 30 to 69 years occur due to non-communicable diseases. Approximately 85% of these premature deaths occur in middle and low-income countries. 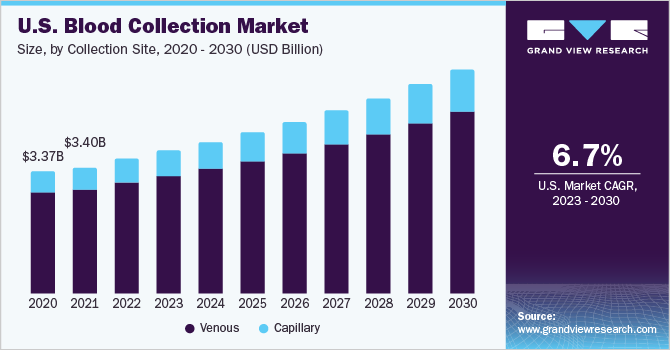 Rise in the number of accidents and trauma cases globally is another major factor driving the market. Blood collection products are required for the treatment of patients suffering from injuries due to trauma or accidents. According to the WHO in 2018, an estimated 1.35 million deaths occurred as a result of road accidents globally. The 2030 Agenda for Sustainable Development set a target to halve the number of deaths as well as injuries caused due to road traffic crashes globally by 2020.

Increase in the number of approvals for technologically advanced products is anticipated to propel market growth during the forecast period. For instance, in February 2017, Seventh Sense Biosystems announced the FDA 510(k) clearance of TAP, which is a push-button blood collection device used for testing of HbA1c levels in patients diagnosed with prediabetes and diabetes.

In addition, according to the latest Asthma Global Report, asthma is estimated to kill around 1000 individuals every day. The same source states that about 329 million individuals are estimated to be affected by asthma globally in 2018. Furthermore, a report published by WHO states that around 9.6 million deaths due to cancer were recorded in 2018. These facts are indicative of an increase in the incidence of non-communicable diseases, which is expected to fuel the blood collection market growth.

Blood collection products are used in the treatment of patients suffering from chronic diseases, especially during chemotherapy, complex surgeries, dialysis, and organ or tissue transplantation procedures. These products are also used during the diagnosis of various infectious and non-infectious diseases. Thus, increase in the incidence of non-communicable and infectious diseases has led to a huge demand for these products resulting in the growth of the market.

Based on product, the market is segmented into blood collection tubes, bags, needles &syringes, and others. In 2018, the needles and syringes segment dominated the market due to its high adoption, repeat purchase, and high affordability. This segment is projected to maintain its dominance during the study period. The high demand for syringes and needles in surgical procedures and disease diagnosis is another major factor responsible for the segmental growth.

Blood bags are used for storage and transfusion of blood that is collected from patients for transfer or sample analysis. These bags contain anticoagulants and/or preservatives that ensure optimum storage. This segment is expected to grow at a lucrative rate owing to the globally increasing number of surgeries and accidents. According to the American Red Cross, 2018 statistics, it was estimated that the U.S. requires about 36,000 units of RBCs every day. Also, more than 21 million blood components are transfused each year in the U.S. Thus, the rising number of blood donations and transfusions are expected to fuel segment growth during the forecast period.

The blood collection tube segment is also anticipated to witness lucrative growth during the forecast period. This can be attributed to the increase in the incidence of diseases that drives the demand for various blood testing methods, which in turn is fueling the segment’s growth.  Moreover, ongoing technological advancement is another factor that is expected to fuel market growth. For instance, Becton, Dickinson, and Company’s Vacutainer Barricor, a plasma blood collection tube has advanced technology that helps in blood collection and separation which offers improved clinical efficiency, sample quality, improved patient care, and faster test results.

Based on application the blood collection market is segmented into diagnostics and treatment. Diagnostics segment dominated the market owing to the increasing prevalence of chronic diseases such as cancer, diabetes, and cardiovascular diseases. This segment is also anticipated to witness the highest CAGR due to the growing awareness about regular health checkups.

Blood collection products are predominantly used in diagnostics, as blood samples are required to diagnose the source of infections due to pathogenic microorganisms or identify anomalies in the level of various blood components. With a rise in the number of infectious diseases, there is an increased demand for blood collection and sample preparation. According to WHO in 2018, 10 million people contracted tuberculosis and 1.5 million died due to the disease. Thus, with an increase in infectious diseases, the demand for diagnostics is also anticipated to fuel the market growth during the forecast period.

An increase in the number of individuals suffering from sickle cell anemia has also created a significant need for blood transfusions globally. According to the Centers for Disease Control and Prevention, an estimated 100,000 individuals in the U.S. are affected by sickle cell disease. Thus, the need for blood & its components is increasing at a relatively large scale globally, which is anticipated to propel the market.

Based on end-use, the market is segmented into hospitals, diagnostic centers, and blood banks. Hospitals held the largest market share in 2018 as they serve as primary centers for treatment and diagnosis of diseases. The global rise in the number of chronic diseases and an increasing number of diagnostic & screening tests are anticipated to positively affect market growth. Diagnostic centers are also estimated to gain significant revenue share during the forecast period, owing to the availability of sophisticated technology that enables faster results. 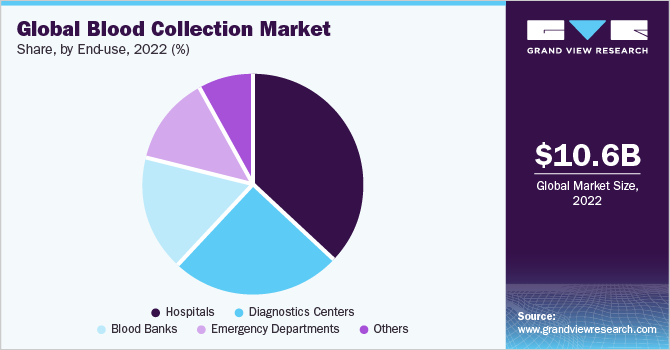 According to the Centers for Disease Control and Prevention in 2016, 145.6 million emergency department visits were recorded in the U.S. Among these visits, 42.2 million were injury-related visits. With an increase in the number of surgical procedures, such as kidney & liver transplants and angioplasty, the need for blood transfusions has significantly increased in hospitals. Also, there is a significant demand for blood and its components for the treatment of several diseases, including cancer; heart or lung ailments; sickle cell anemia; and other disorders, such as thalassemia & hemophilia. There has been a substantial rise in infectious diseases, such as malaria, dengue, hepatitis, and pneumonia that require blood collection products for early detection and diagnosis. Hospitals are the primary care centers for diagnosis and treatment, with the majority of screening & diagnostic tests being conducted therefrom in-house departments or independent clinics.

According to the World Health Organization, the incidence of tropical diseases, like malaria, chikungunya, dengue, and yellow fever has significantly increased, driving demand for the market. As detection of these diseases requires various diagnostic devices, the demand for blood collection products is expected to rise in the near future.

North America dominated the overall market in 2018. Well-developed healthcare infrastructure, an increase in R&D activities, and the presence of leading clinical diagnostics companies in North America have fueled the regional market. For instance, in August 2019, Q-Sera Pty Ltd. announced that the company received Notice of Allowance from the United States Patent & Trademark Office for the patent of Q-Sera’s technology for blood clotting that will be used in blood collection tubes. Moreover, the adoption of innovative & advanced technology and a large focus on clinical research drive regional growth.

The European region includes the UK, Germany, France, Italy, Spain, and other countries. This region accounted for the second-highest revenue after North America with a CAGR of 5.9% during the forecast period.  The increasing number of  blood donation activities and the presence of key market players in this region are expected to drive market expansion. According to the European Blood Alliance, NHS Blood and transplant collects about 1.5 million voluntary donations. In addition, Scottish National Blood Transfusion Service deals with about 250,000 blood donations per annum from a donor base of 140,000.

According to the WHO, non-communicable diseases and injuries collectively account for 49% of the deaths in South Africa. Various initiatives have been undertaken by the government to reduce the incidence rate of these diseases. For instance, the National Health Promotion Foundation in South Africa monitors the prevalence rates and suggests measures to reduce the incidence level. Growing healthcare awareness, initiatives undertaken by various NGOs, increasing penetration of health insurance, and privatization are some of the factors anticipated to fuel market growth in this region.

The Asia Pacific region is projected to showcase the highest growth rate during the forecast period owing to rising disposable income and escalating prevalence of sepsis and HAI in this region. Also, the growing presence of leading manufacturers in this region is expected to contribute to the growth of this sector in the near future.

The major companies are undertaking several strategic initiatives such as new product development, collaborations, and regional expansion to gain maximum share in the industry. For instance, in March 2018, BD announced the launch of a CE-IVD marked PAXgene Blood ccfDNA tube within Switzerland and the European Economic Area. The product protects the healthcare worker’s safety and also provides reproducible and accurate results. Also, Abbott Laboratories- one of the major players stated that each year around 4 billion tests are conducted using Abbott testing platforms.

This report forecasts revenue growth at global, regional & country levels and provides an analysis of the latest trends and opportunities in each of the sub-segments from 2014 to 2026. For this study, Grand View Research has segmented the global blood collection market report based on product, application, end-use, and region:

How big is the blood collection market?

What is the blood collection market growth?

Which segment accounted for the largest blood collection market share?

b. The diagnostics segment held the largest blood collection market share with a market share of 65.4% owing to the rising prevalence of chronic diseases such as cancer, diabetes, and cardiovascular diseases coupled with growing awareness about regular health checkups.

Who are the key players in blood collection market?

What are the factors driving the blood collection market?

b. The increasing prevalence of infectious diseases, the mounting number of accident & trauma cases, and non-communicable diseases are the key factors contributing towards market growth.