The global bovine tuberculosis diagnosis market size was valued at USD 707.4 million in 2021 and is estimated to expand at a compound annual growth rate (CAGR) of 4.2% from 2022 to 2030. Increasing cattle population, increasing consumption of animal products, rising concerns over zoonosis, strategies initiated by key companies, and supportive regulations and programs implemented by governments are some of the key factors driving the growth of the market. For instance, the National Tuberculosis Eradication Program administered by the U.S. Department of Agriculture’s (USDA), Animal and Plant Health Inspection Service (APHIS), was implemented with the aim of eradicating bovine TB in the U.S. in 1917. The program comprises continuous and periodic testing of cattle across the country to detect TB, through a robust surveillance program among other initiatives. This is anticipated to contribute to market growth. 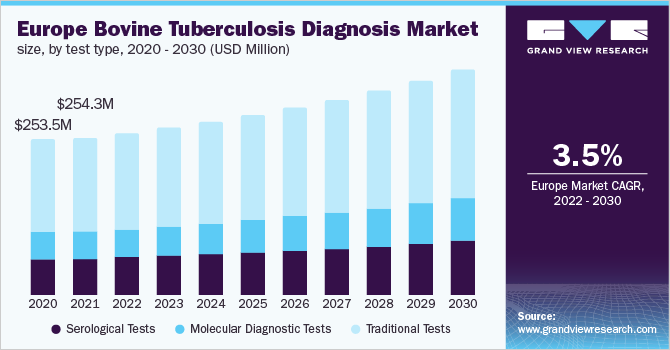 The COVID-19 pandemic has resulted in the market decline, especially during 2020. This adverse impact is mainly attributable to the closure of and restricted access to veterinary services because of lockdowns. The bovine TB eradication programs in various countries faced enormous challenges in proceeding with their diagnosis processes during the pandemic. For instance, in November 2021, the Minister for Environment, Energy and Rural Affairs (MEERA), U.K., reported that various new eradication programs and their aspects had been paused and delayed due to the sudden public health crisis. This led to operational hurdles in the implementation of the TB eradication program.

However, the government agencies and key players have taken various measures to continue their eradication programs during the pandemic. For instance, according to the Department of Agriculture, Environment and Rural Affairs (DAERA), the U.K., measures were introduced in March 2020 to support the resumption of bovine Tuberculosis (TB) testing activities which were disrupted during the COVID-19 pandemic. As per the measure, herd keepers were advised to complete overdue bovine Tuberculosis (TB) tests that were delayed due to the pandemic. Similarly, as per the Michigan Department of Agriculture and Rural Development (MDARD), the U.S., activities under the Bovine Tuberculosis Eradication Program such as TB testing continued during the pandemic while following precautions to prevent disease spread.

Some of the key drivers propelling the market for bovine TB diagnosis include the increased bovine TB eradication and surveillance initiatives by governments, R&D initiatives by key companies, post-pandemic return to normal, and expansion of test types and services offerings. For instance, the World Organization for Animal Health (OIE) approved Enferplex Bovine TB Antibody test in June 2019, which was manufactured by Enfer Group in Ireland. This test kit aids in the detection of antibody to M. bovis in serum samples of cattle, hence suggested by OIE for serological infection diagnosis and management. The company partnered with Sure Farm Ltd to distribute its product across the U.K. to enhance its distribution channel. These affirmative factors attributed to the growth of the market for bovine TB diagnosis during the forecast period.

The traditional tests segment dominated the market for bovine TB diagnosis and accounted for a revenue share of around 60.0% in 2021. Some traditional TB skin tests such as the Single Intradermal Comparative Cervical Tuberculin (SICCT) test, are the most common clinical examination method and is used throughout the world in various types of herds and cattle in order to diagnose bovine TB. The Agriculture and Horticulture Development Board U.K., recommends SICCT as the primary screening test for TB in cattle. The test includes two types of tuberculin (bovine and avian) that are injected into the neck skin layers of animals and results are read after 72 hours post-injection. The specificity and sensitivity of this test is 99.98% at a standard interpretation which is influenced by the stage and severity of the disease. These affirmative factors are propelling the trust and use of products thereby improving the growth of the segment. 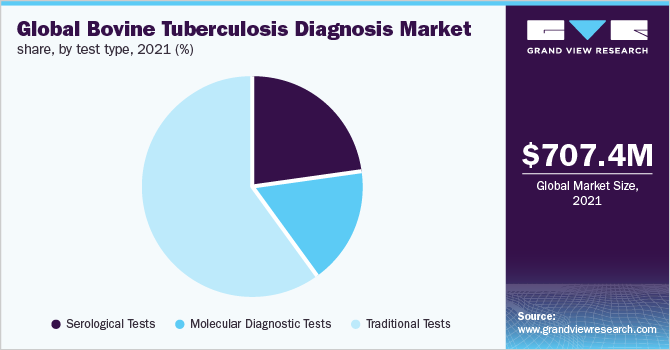 The molecular diagnostic tests segment is anticipated to witness a CAGR of over 5.0% in the market for bovine TB diagnosis during the forecast period owing to increasing research and development activities by key players targeting better and more reliable molecular diagnostic products. Rapid and accurate diagnostic tools such as real-time PCR are being implemented to perform confirmatory tests for bovine TB diagnosis. For example, In February 2020, Idvet launched ID Gene Mycobacterium tuberculosis complex Duplex qPCR (product code IDTUB-50 and IDTUB-100). The test kit includes ready-to-use reagents, positive control, and exogenous internal control. This test can be performed with lymph nodes and peripheral tissue samples of cattle and various other livestock animals.

Europe dominated bovine tuberculosis (TB) diagnosis market and accounted for a revenue share of 30.0% in 2021. The high share of the European region is owing to the presence of key players, adoption of various strategic initiatives to increase market penetration, rising government programs for bovine TB eradication, and a large cattle population. According to the European Commission, the bovine population in the region was estimated to be over 77 million in December 2019. Another key factor that is expected to propel regional growth includes a significant prevalence of bovine tuberculosis among cattle herds. According to the European Union Reference Laboratory, from 2010 to 2019, the prevalence of the disease grew from 1.0% to 1.8% in Europe.

In the Asia Pacific, the market is estimated to grow fast with a CAGR of over 5% in the next few years. This is attributable to increasing awareness about the disease in developing countries and rising disposable income in key markets. The growing demand for the proper and timely diagnosis of bovine TB in countries like India are further boosting the growth of the market for bovine TB diagnosis. According to a study published in the Research Gate Journal in 2018, the prevalence of bovine tuberculosis was estimated to be 14.31% to 34.42% in India.

The market for bovine TB diagnosis is competitive in nature. Leading companies deploy strategic initiatives, that include product and service expansion, competitive pricing strategies, sales and marketing initiatives, partnerships, and mergers and acquisitions. For instance, in November 2017, PBD Biotech expanded its offerings lineup by launching Actiphage (TB), a blood test for bovine tuberculosis. This test enables live bacteria detection in blood or milk in just 6 hours, thereby allowing quick and timely diagnosis of the disease in a herd. Bovine TB awareness initiatives by key industry stakeholders is another key factor propelling the growth of the market for bovine TB diagnosis. For instance, the OIE organized seventh International Conference on Mycobacterium bovis in Ireland, in June 2020. The conference aimed at increasing awareness related to controlling and eradicating M. bovis by gathering various industry stakeholders and key players around the world. Such initiatives by organizations and companies are propelling the opportunity over market growth. Some of the prominent players in the bovine tuberculosis (TB) diagnosis market include:

This report forecasts revenue growth at global, regional, and country levels and provides an analysis of the latest trends in each of the sub-segments from 2017 to 2030. For the purpose of this report, Grand View Research has segmented the bovine Tuberculosis (TB) diagnosis market report on the basis of test type and region:

Who are the key players in Bovine Tuberculosis Diagnosis market?

What are the factors driving the Bovine Tuberculosis Diagnosis market?

How big is the Bovine Tuberculosis Diagnosis market?

b. Europe held more than 30% share of the Bovine TB Diagnosis market in 2021. The high share of the European region is owing to the presence of key players, adoption of various strategic initiatives to increase market penetration, rising government programs for bovine TB eradication, and a large number of cattle population.

What is the Bovine Tuberculosis Diagnosis market growth?

b. Key factors that are driving the Bovine TB Diagnosis market growth include increasing cattle population, consumption of animal products, concerns over zoonosis, strategies initiated by key companies, and supportive regulations and programs implemented by governments.