The BRIC diabetes care devices market size was valued at USD 3.22 billion in 2018 and is expected to grow at a compound annual growth rate CAGR of 5.3% from 2019 to 2026. The key market drivers include the rising geriatric population prone to various chronic diseases and the high prevalence of diabetes. According to the International Journal of Health Policy and Management (2018), BRIC countries-Brazil, Russia, India, and China accounted for 40% of the world population, including a large geriatric population and a large patient pool suffering from impaired blood glucose levels. The majority of the deaths reported in BRIC nations are due to non-communicable diseases and diabetes. 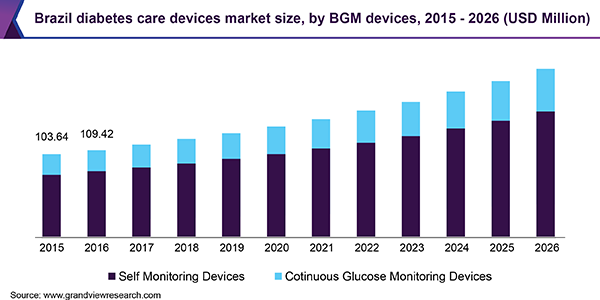 Diabetes is a clinical condition where the inability of the pancreas to produce insulin causes the glucose level in the body to increase. The factors responsible for the increasing incidence of diabetes are the lack of physical activity, the harmful use of alcohol, tobacco consumption, and obesity. The key factor driving the market growth is the increasing geriatric population prone to various chronic diseases. According to the United Nation statistics, the number of BRIC population older than 65 years is expected to reach 295 million by 2020 and 412 million by 2030.

Increasing healthcare expenditure is also anticipated to fuel the market for diabetes care devices in the BRIC nations. For instance, Brazil’s healthcare spending per GDP is expected to increase from 8.3% in 2014 to 10.0% in 2030. Several government initiatives and product launches in the field of diabetes care are also expected to propel market growth. For instance, in 2019, Research Trust of Diabetes India launched its 1000 days Initiative to control diabetes in the country. This initiative is expected to bring diabetologists across the country to provide recommendations and clinical guidelines.

The healthcare expenditure in BRIC nations has exhibited an exorbitant revenue growth rate for pharmaceutical Multinational Corporations (MNCs). With the progression in the IT industry and advancements in the field of diabetes, the market holds a promising growth potential. Several companies are taking strategic initiatives to provide diabetes devices to these countries. For Instance, in February 2019, Roche Diabetes Care and Senseonics, Inc. extended its network for the distribution of Roche’s implantable glucose monitoring system in an additional 17 countries including BRIC nations.

Based on the product, the BRIC diabetes care devices market has been segmented into Blood Glucose Monitoring (BGM) devices and insulin delivery devices. The BGM segment is further divided into self-monitoring devices and continuous glucose monitoring devices. BGM devises segment is expected to expand at the fastest CAGR of 8.40% during the forecast period, primarily attributed to the increasing adoption of these devices and continuous innovation in the field of diabetes care. The region is also witnessing several FDA approval and product launches for BGM devices. For instance, in February 2018, Roche Diabetes Care India launched a glucometer Accu-Check Instant S-a glucose monitoring system to provide an effortless solution for patients with impaired glucose levels.

The self-monitoring devices segment is further divided into blood glucose meters, testing strips, and lancets. The sensors segment held the largest market share in 2018 and is expected to witness a CAGR of 8.72% during the forecast period. The high market size of the segment is primarily attributed to its features, such as high cost and the need for constant replacement due to its small average life of 7 days. The blood glucose meter segment is anticipated to expand at the fastest CAGR of 9.07% owing to high adoption and continuous technological advancements. 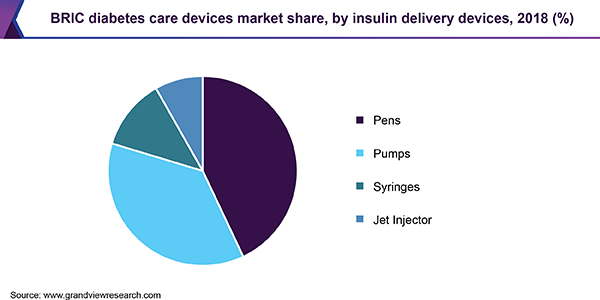 The insulin delivery devices segment is divided into an insulin pen, insulin pumps, syringes, and jet injectors. The insulin pen segment accounted for the largest market size owing features of the pen such as user-friendly design and ease of use. Advancements in the product and high usage of insulin pen are some of the factors projected to further propel the growth. The insulin pump segment is expected to expand at the fastest CAGR of 3.81% during the forecast period owing to increasing adoption and rising number of diabetes patients who require multiple daily dosages of insulin.

China is anticipated to hold the leading market share, owing to a large diabetic population coupled with rapid technological advancements. Moreover, an increasing number of geriatric populations is further propelling the market over the forecast period. India is also expected to capture considerable market share owing to rising diabetes population, improvement in the healthcare sector, increasing government initiatives, and product advancements in the field of diabetes care devices. Increasing awareness about diabetes preventive care is projected to further augment the growth over the forecast period.

Most market players focus on mergers and acquisitions and technological collaborations to expand their business and distribution network in new regions. For instance, in September 2019, Medtronic Collaborated with Novo Nordisk to integrate its digital offering for people who require daily insulin dosage. Under the agreement, Novo Nordisk’s smart insulin pen will link with Medtronic’s all major CGM systems. Some of the prominent players in the BRIC diabetes care devices market include:

This report forecasts revenue growth at global, regional, and country levels as well as provides an analysis of the latest industry trends in each of the sub-segments from 2015 to 2026. For this study, Grand View Research has segmented the BRIC diabetes care devices market report based on product and region:

How big is the BRIC diabetes care devices market?

What is the BRIC diabetes care devices market growth?

b. China dominated the BRIC diabetes care devices market with a share of 36.3% in 2019. This is attributable to rising incidence of diabetes coupled with technological advancement.

Who are the key players in BRIC diabetes care devices market?

What are the factors driving the BRIC diabetes care market?

b. Key factors that are driving the market growth include increasing healthcare expenditure relates to diabetes and rising awareness about diabetes preventive care.