The global canned seafood market size was estimated at USD 21.50 Billion in 2016. Increasing popularity of ready-to-eat seafood products due to improvement in distribution infrastructure is anticipated to drive the industry growth. In addition, factors such as changing life styles coupled with increasing affordability are likely to drive the industry growth over the next eight years. 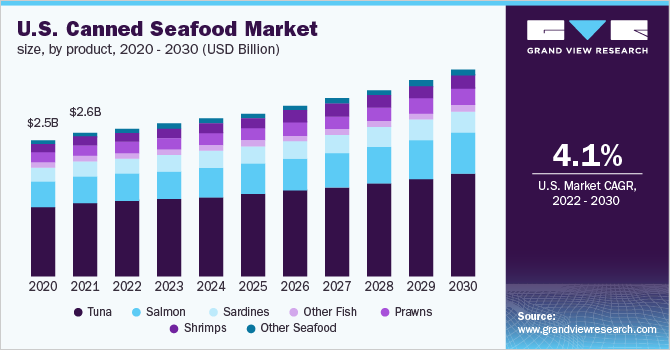 Demand for the product is likely to rise due to increased product consumption owing to health benefits coupled with the adoption of sustainable fish farming techniques adopted by the manufacturers. In addition, advantages offered by this product including extended shelf life, ease in cooking, are anticipated to drive growth.

The industry in the U.S. is expected to be driven by the high product use in restaurants and other eateries. In addition, high demand for ready to eat exotic products in the economy is expected to drive growth over the forecast period. Furthermore, key players in the industry resort to the use of premium quality tuna for canning in order to alleviate the concerns regarding canned tuna.

The industry is anticipated to grow in Asia Pacific as fish forms an important food for the population living in economies such as Japan, China, Vietnam, Indonesia, and Thailand. In addition, positive governmental support in terms of reduction in tariff, waving import tariff is likely to drive the growth in market for next eight years. In addition, presence of large companies in the region is expected to benefit growth over the forecast period.

The price of the product is influenced by the volatility in the production level of fishes. Lower income levels of population in developing economies are unable to afford the product which is likely to hamper industry growth. In addition, the seasonal availability of the product is anticipated to hamper the growth. However, decrease in the price for products such as canned tuna is expected to drive growth.

The industry is majorly influenced by climatic conditions, contamination of sea food which is anticipated to limit the market growth. However, recent recommendation by countries such as to increase the canned sea food consumption is likely to propel the growth in the market over next eight years.

Canned tuna emerged as one of the widely consumed product in industry. On account of its superior properties including rich source of lean proteins. In addition, other nutrients offered by the product such as omega 3 fatty acid, that results in the improvement of personal health, is anticipated for increase the consumption. 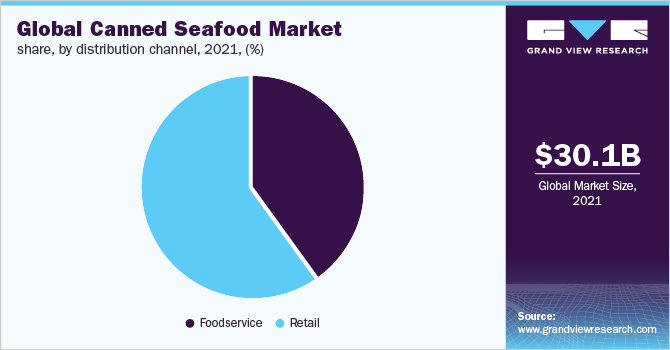 Canned shrimp market is expected to grow at a CAGR of over 4.1%, by revenue, from 2017 to 2025 owing to factors such as high nutritional value, use of the product across multiple cuisines adoption of the product by high-end restaurants. In addition, the product provides benefits such as low fat content coupled with high concentration of easily digestible protein, which is expected to drive the canned seafood market growth.

The growth of canned prawns is expected to be restrained on account of high incidences of illegal trade of prawns leading to environmental damage. In addition, use of harmful antibiotics during processing of such prawns is expected to restrain the market growth. However, demand for is anticipated to increase on account of growing consumption by the such products in South East Asia and Australia over the forecast period.

The presence of major market players in Asia Pacific region coupled with increased disposable income and gyrating consumer preferences towards ready to consume food is likely to emerge as the primary factor for market growth over next eight years. The increased consumption of seafood by the population owing to its high health benefits is anticipated to propel industry growth.

Growth in consumption of such products in restaurants, hotels, industries in France is likely todrive growth in Europe. The strong purchasing power of consumers in this region is likely to propel the product demand over next eight years. The increased quality in sea food offered by distributors coupled with new ecofriendly packaging technologies is expected to accelerate the market growth over the forecast period.

Growing demand for the product in Germany and UK is expected to result in an increased production volume. In addition, the technological innovations including aquaculture practices in this region is anticipated to increase industry growth over next eight years.

The competition in the canned seafood industry is concentrated over the Asia Pacific region with the presence of global and domestic players. Major companies in the industry including Bumble Bee Seafoods, StarKist Co., Wild Planet Foods, Connors Bros Ltd., Tradient Seafood. Sophisticated performance, reduction in the cost, superior quality and use of advanced technologies are anticipated to be major characteristics of the players in the market.

The manufacturers in the industry are involved in the production of multiple products made available thorough varying stock keeping units. The industry witnessed multiple mergers and acquisitions by the companies in a bid to increase the market share. In addition, the industry is dominated by players such as Thai Union Group which operate globally through direct distribution or third party owned product supply networks

This report forecasts revenue growth at global, regional & country levels and provides an analysis on the industry trends in each of the sub-segments from 2014 to 2025. For the purpose of this study, Grand View Research has segmented the global canned seafood market on the basis of product and region: