The global carbon fiber market size was valued at USD 2.25 billion in 2015 and is projected to grow at a CAGR of 10.9% from 2017 to 2025. Increasing demand for this product from the automotive and aerospace industries is likely to drive the product demand. Increasing automotive demand coupled with the rising need for lightweight vehicles is expected to fuel the demand over the forecast period. The need for fuel-efficient vehicles along with government regulations regarding automotive pollution are anticipated to play a key role during the forecast period.

The growing aerospace industry in North America and Europe is also anticipated to fuel the growth. Increasing demand for commercial aviation on account of increased disposable income and globalization has driven growth across the aerospace industry over the last few years, which is a key trend that is expected to continue over the forecast period as well. The surge in demand for sports and leisure applications, especially in the Asia Pacific region, is also likely to increase the product scope.

The rise in propylene production has driven the polyacrylonitrile demand, which is a primary raw material for carbon fiber production. R&D activities in major regions are likely to drive the regional growth for the product. For example, the presence of key industry players such as Toray Industries Inc., Teijin Limited, and Mitsubishi Rayon Co., Ltd. in Japan.

Increasing demand in the automotive sector is expected to play a vital role over the forecast period. The aerospace application segment contributed significantly toward the overall market share in terms of revenue. This can be attributed to the high cost of aerospace-grade carbon than that of other standards available in the carbon fiber market. Growth in the commercial aviation segment is projected to play an important role in fostering industry growth.

The primary raw materials in carbon fiber manufacturing are polyacrylonitrile (PAN) or pitch. The superior properties of PAN are expected to result in wider acceptance in various applications. The global PAN market is slated to grow at a CGAR of 12.9% creating a demand for over 200 kilotons by 2025.

Increasing demand for a higher strength to weight ratio carbon fiber, PAN precursor is widely used on account of its superior material properties. The lower cost of PAN as compared to pitch-based carbon fiber is also expected to support the segment growth.

Carbon fiber consists of fibers that comprise < 92% carbon. Some parallel filaments are grouped together to form a single tow. Fibers having filaments up to 24,000 are referred to as small tow.

Small tow fibers are widely used in the aerospace industry owing to their high tensile strength and high modulus when used for manufacturing composites, which are used in numerous applications. Small-tow fibers are costlier when compared to large tow fibers.

The small tow segment is slated to emerge as the largest as well as the fastest-growing application segment. This segment is expected to increase at an anticipated CAGR of 12.9% from 2017 to 2025.

The aerospace & defense segment held the largest share account of its growing requirement for lightweight materials. The rapidly growing aviation industry is further expected to expand the application base in the air transport sector. 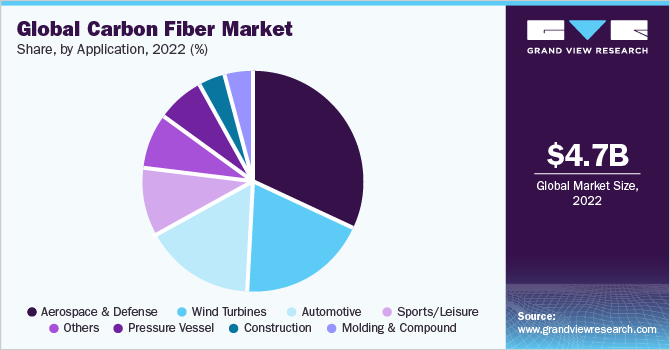 Automobiles are expected to emerge as another major application segment. Carbon fibers are known to reduce the overall vehicular weight; this is projected to support the overall product market.

North America is expected to grow at an estimated CAGR of 11.0%. The region is marked by a large concentration of the main aircraft makers such as Airbus and critical defense instruments manufacturers in the area. Automobile giants in North America, emphasize manufacturing high performance cars with reduced weight, further driving the market in the region.

Europe is projected to be the largest as well as fastest-growing market, generating a revenue of USD 2,066.6 million by 2025. The presence of strict laws and regulations focused on reducing environmental pollution, and constant efforts in the European region are likely to play a key role.

Major industry participants have integration throughout the value chain. The companies have focused their operations to produce the raw materials and also manufacturing the product, to reduce the product price.

This report forecasts volume & revenue growth and provides an analysis on the latest trends in each of the sub-segments from 2014 to 2025. For the purpose of this report, Grand View Research has segmented the global carbon fiber market on the basis of raw material, tow size, application, and region: