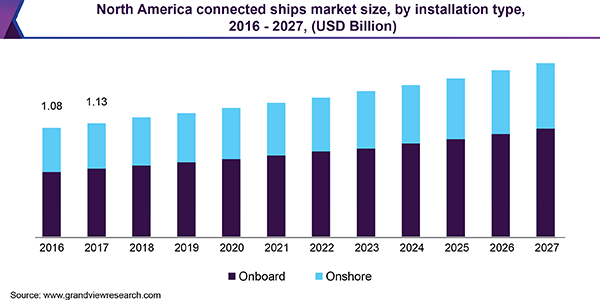 Transport of goods and materials through the sea has traditionally been one of the most affordable means of transit. Ships are designed to carry bulk quantities to distant places at minimum risk and in an optimum time period. With ever-improving trade relations between countries and increasing export activities, the supply always seems to be less as compared to the demand. To meet these ever-increasing requirements, more vessels are being built and are used as a primary means of transport.

An increase in the number of ships globally has strained the existing traffic management and monitoring and control infrastructure considerably. Furthermore, the increasing complexity of ship operations has added up to the problem. To overcome the void, ships are connected to a network that allows easy access to the monitoring and controlling activities of the officials onshore as well as to the crew onboard. Connected ships ensure smooth traffic movement at some of the most congested trade routes, which, in turn, is anticipated to boost market growth over the forecast period.

The increasing number of connected ships and the development of new and existing ports in numerous countries are driving the market. Countries such as China have undertaken an expansion of port facilities widely across their coastline as well has started constructing ports in the South China Sea. Such newly developed ports need sophisticated infrastructure to manage and monitor the connected ship traffic. As a result, an increasing number of ports across each region is further anticipated to fuel the demand for connected ships over the forecast period.

The commercial connected ship type segment is expected to emerge as the fastest-growing ship type in the connected ship's market, owing to the increasing commercial fleets globally. Transport of supplies such as crude oil, steel, electronic devices, automobiles, and food items is primarily carried out between countries by commercial connected ships. Private shipping organizations have been observed to be increasing their fleet sizes to capitalize on the import-export activities carried out on a global stage. At the same time, these shipping conglomerates primarily focus on improving efficiency by reducing travel times. By connecting to a network these commercial connected ships can choose the shortest possible routes to the destination depending on the parameters such as traffic congestions and availability of ports. With increasing trade activities globally, this segment is anticipated to register a significant growth rate over the forecast period.

On the other hand, the defense connected ship type segment is anticipated to grow at a considerable rate over the forecast period. Nations with extensive coastlines such as China, India, U.S., and France have been observed to be strengthening their navy prowess in order to secure their borders and safeguard the trade routes passing through their national waters. With increasing threats from terrorist organizations and pirate groups, this trend is anticipated to continue over the next few years, positively impacting the growth rate of the connected ship market.

The onboard installation segment accounted for the largest revenue share in the market for connected ships in the year 2018 and is anticipated to be the fastest-growing segment over the forecast period. The majority of the operations carried out by connected ships are onboard and involve monitoring and controlling functions that are ongoing, as the ship travels. The ship operations are time-critical and are needed to be addressed with minimum turnaround time, in order to ensure smooth functioning.

However, the onshore installation segment, also, is anticipated to grow at a significant rate over the forecast period. Officials and the organizations managing the port activities, fetch data from the connected ships traveling inwards and outwards in order to keep a track of the traffic encountered on daily basis. This is done to efficiently manage space allocations and to avoid any possible congestion. As a result, onshore installations play an equally important part in port operations.

The vessel traffic management segment acquired the largest revenue share in the market for connected ships in the year 2019. Some of the busiest seaports in the world such as Los Angeles, Shanghai, and Dubai have been observed to be handling cargo of billions of dollars and container volume in millions on daily basis. Such ports have implemented sophisticated vessel management systems that help them efficiently handle such huge volumes. Moreover, governments have implemented strict policies and mandates to control the illegal discharge of waste in and around the port premises. All such activities are controlled centrally using a data-driven decision-making system that in turn improves the overall efficiency of the ports. 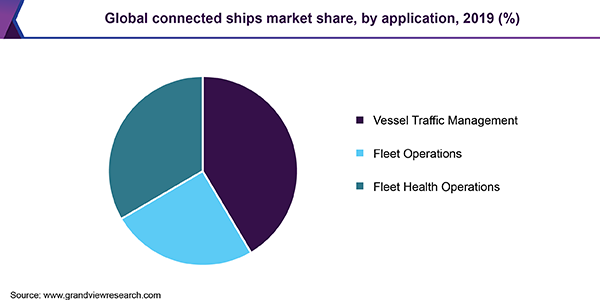 Fleet operations include travel route decisions, trade information management, and asset protection and inspection tasks. Numerous systems are simultaneously monitored in order to prevent misalignments with planned schedules. A centralized system facilitates easy control over all the operations at the same time as a result of which the fleet operations segment is anticipated to witness significant growth over the forecast period.

The Asia Pacific dominated the market for connected ships in 2019 with a revenue share exceeding 30.0%. The region has been observed to have some of the busiest ports and trade routes globally. Countries such as China, Singapore, and South Korea have ports that encounter heavy traffic every day.  Furthermore, with upcoming new ports in countries such as the Philippines, Indonesia, and Hong Kong, maritime transportation in the region is anticipated to grow exponentially, which is expected to positively impact the growth of the market in the region.

Europe is expected to be the second fastest-growing region in the market for connected ships over the forecast period. Mediterranean sea routes have been observed to be some of the busiest and most congested trade routes historically. With increasing imports of items such as spices, electronic devices, and oil from the Asia Pacific and the Middle East, the market for connected ships is anticipated to gain new growth avenues in the region over the next few years.

The major players included in the study are General Electric, Emerson, Wartsila Corporation, Kongsberg, and Schneider Electric. In order to capture/secure a larger market share, key market incumbents are undertaking initiatives and adopting strategies such as entering into partnerships, making investments, engaging in mergers and acquisitions, launching new products and services, and maintaining competitive prices for their products and services.

This report forecasts revenue growth at global, regional, and country levels and provides an analysis of the latest industry trends for each of the sub-segments from 2016 to 2027. For the purpose of this study, Grand View Research has segmented the global connected ship market report on the basis of ship type, installation type, application, and region:

How big is the connected ship market?

What is connected ship market growth?

Which segment accounted for the largest connected ship market share?

b. Asia Pacific dominated the connected ship market with a share of 32.3% in 2019. This is attributable to the presence of some of the busiest international ports and trade routes in the region.

Who are the key players in the connected ship market?

What are the factors driving the connected ship market?

b. Key factors that are driving the market growth include the increasing need to monitor the operations, functioning, and the voyage path of ships on a centralized platform.