The global contraceptives market is estimated to grow at a lucrative rate over the forecast period owing to, increasing the prevalence of sexually transmitted diseases and growing need for population control. Implementation of initiatives aimed at curbing unwanted pregnancies associated healthcare expenditure and the subsequent growth in user awareness levels are expected to drive the contraceptives industry over the forecast period. 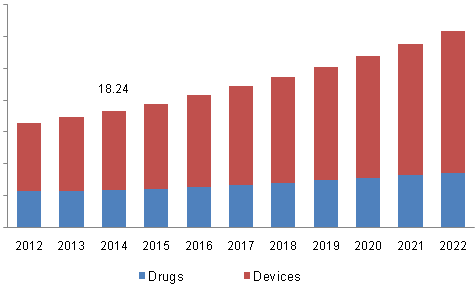 According to the U.S. Centers for Disease Control and Prevention, approximately 37% of the birth in the U.S. is a result of unwanted pregnancy, a proportion which has remained stagnant since 1982. Despite advancements in technology and the amount spent every year on R&D, U.S. unplanned pregnancy rate has remained unchanged for decades. The U.S. federal policy has taken measures to increase contraceptive availability by mandating its coverage by health insurance companies and permitting the Emergency Contraceptives (ECs) to be available Over-The-Counter (OTC). According to a recent study published in 2015 in The Lancet, while training healthcare providers, more impetus is on IUDs and implants as patients are mostly young women. The presence of an extensive product pipeline portfolio is expected to boost industry growth throughout the forecast period.

Male and female condoms, vaginal implants, subdermal implants, diaphragms, sponges, and IUDs are key devices and accounted for the largest share of the contraceptives market in terms of revenue. This is attributed to the increase in the awareness level about sexually transmitted disease (STD) and the efficiency of condoms to prevent the infections, including HIV. In a recent study, subdermal implants have been identified to have an immense potential to meet the requirement of women for family planning. The most accepted form of long-acting reversible contraception includes intrauterine devices (IUDs). The IUD segment held one of the largest shares of the contraceptive devices in 2014 owing to the rising demand in the regions of Europe and Asia Pacific. Rising number of gynecologists opting for these devices for contraception is expected to drive this segment over the forecast period. Mirena, a hormonal IUD is widely used throughout North America and is expected to sustain the growth of the market. Besides Mirena, other brands available currently are Skyla, Jaydess, Nova-T, Flexi-T, Paragard, and others. Contraceptive drugs include pills, topical, and injectables. Contraceptive pills dominated the overall drugs market in 2014 in terms of revenue, owing to a significantly large consumer base, very high usage and government programs, and initiatives to address the unmet needs of the women of the reproductive age. The global oral contraceptive pills market was valued at USD 5,236.4 million in 2014 and is expected to grow at a CAGR of 5.3% from 2015 to 2022.

North America contraceptives market accounted for the largest share at over 30.0% in 2014 owing to, the high incidence rates of abortion, rising population of women within the age group of 15-44 years, and high patient awareness levels in the region. The European contraceptives market also enjoys a high degree of product penetration especially, in segments such as IUD and subdermal implants. Latin America contraceptives market is expected to grow at a rapid rate due to the presence of large untapped opportunities, constantly improving healthcare infrastructure, economic development, and rising patient awareness. An unmet contraceptive need for about 215 million people worldwide (18.2%) is further expected to grow the market. Regionally, Asia Pacific has highly influenced the industry in terms of demographics and lack of awareness within the large population. Favorable government initiatives pertaining to sex education of individuals are one of the critical success factors expected to boost the contraceptives market growth over the forecast period