The global craft spirits market size was valued at USD 13.23 billion in 2021 and is expected to expand at a CAGR of 28.3% from 2022 to 2030. Some of the primary reasons driving market expansion are rising demand for craft spirits and an increase in the number of craft distilleries, and rising disposable incomes. The millennial population with considerable purchasing power is expected to drive the market during the forecast period. 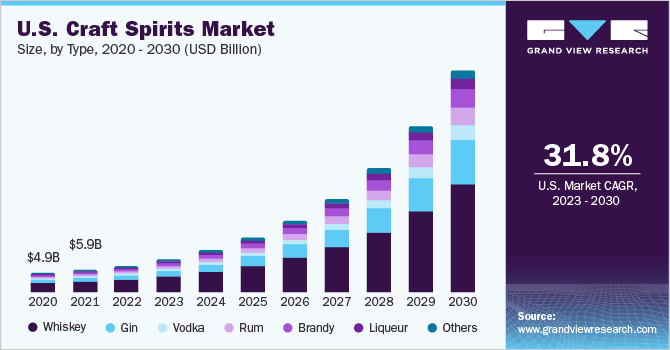 Licensed distillers with a set production volume make craft spirits. They should have separate operations with less than 25% capital from an alcoholic beverage sector player and operational control. The product must have a label certified by the Alcohol and Tobacco Tax and Trade Bureau in the United States (TTB). Due to the large demand in the United States, the sector is primarily centered in North America. Due to advantageous approval regulations, investments in the United States have expanded at a promising rate in recent years. In 2012, the Alcohol and Tobacco Tax and Trade Bureau (TTB) received 13,867 new applications, up 24.4 percent from 2009 and 82 percent from 2006.

Furthermore, Millennials, those born between the 1980s and the early 2000s, make up a considerable demographic of alcoholic beverage consumers, as they make up a large portion of those who frequently visit restaurants and pubs. They appear to be the most powerful buyers of a wide range of foods and beverages, including craft spirits. Moreover, many craft distilleries have closed their tasting rooms in the last few months to comply with local and state public health guidance and to protect their employees.

According to a survey of nearly 300 American distilleries conducted by the Distilled Spirits Council of the United States (DISCUS) and the American Distilling Institute in august 2021. And, as one might assume, the number of customers for those who could open securely was restricted. As a result, over 40% of craft distilleries reported a significant decrease in on-site sales (i.e., 25% or more). More than a quarter of respondents claimed their tasting rooms were entirely closed.

Despite COVID-19 negative impact in 2020, the market for craft spirits continues to increase, according to the US Craft Spirits Association. Surprisingly, the most steadfast product domain that was unaffected by the pandemic was booze. Between August 2020 and August 2021, the number of craft distilleries increased by 1.1%. In 2020, the market is expected to generate revenues of more than USD 5 billion. In terms of market suffering, the numbers demonstrate resiliency.

The whiskey segment led the market and accounted for a 45.0% share of the global revenue in 2021. The growth of this segment is due to the extraordinary and one-of-a-kind flavor that the mentioned product domain provides. Whiskey has been able to deliver certain medical benefits as a result of product developments over the years. Distillers are increasingly adding a variety of herbs and spices to lengthen the offering for both taste and medical purposes. Moreover, whiskey contains a lot of polyphenols, an antioxidant that has been shown to lower LDL (bad cholesterol) and raise HDL (good cholesterol). Around 51% of persons in the U.S. have dangerously high cholesterol, which whiskey can assist with.

The gin segment is anticipated to expand at the fastest CAGR of 31.0% from 2022 to 2030. Brands are increasing their consumer appeal by including regional botanicals, aged expressions, new flavors, and other innovations. While the average retail price of a 750ml bottle of gin sold in the United States last year was USD16.77, the average artisan gin retails for more than USD 30.

Off-trade accounted for the fastest-growing distribution channel in 2021, at CAGR of29.5% from 2022 to 2030. Hypermarkets, supermarkets, convenience stores, micro-markets, and wine and spirit shops all fall into this category. People choose these establishments because they provide substantial discounts and exclusive incentives. 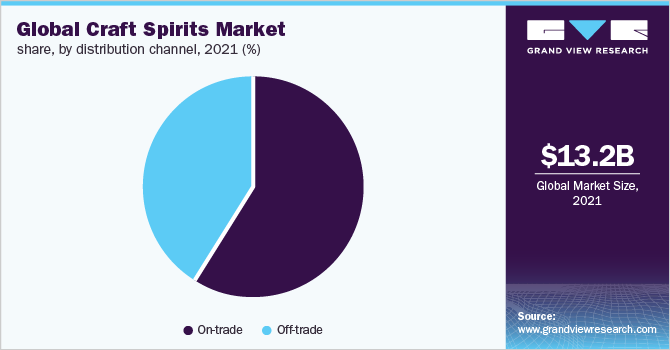 The on-trade channel is projected to register the largest market revenue share of58.7% in 2021. It is due to the opening of restaurants, bars, and pubs, as well as a variety of other ancillaries, whose sales have increased significantly following vaccination and the opening of economies. Furthermore, customers prefer to drink craft spirits in locations where they can connect and bond with other students, and liquor has been related to the overall ambiance.

North America made the largest contribution to the global market of over 61.4% in 2021. It is accounted to have a 60% market share of the global volume of craft spirits.  Over the forecast period, the region's growing millennial population is expected to drive demand. Because of secure approval policies developed by regulatory bodies, the number of manufacturers in the United States has increased at a rapid rate.

Asia Pacific is expected to witness a CAGR of 33.4% from 2022 to 2030, due to growing purchasing parity and the large rise of the millennial generation in emerging nations such as China, India, Malaysia, Thailand, and Indonesia, the market is predicted to expand at the fastest CAGR. Huge potential in these countries' underdeveloped marketplaces is likely to provide lucrative opportunities in this region.

In addition, in Asia Pacific, economically independent millennials are living with their parents, giving them more spending power. As a result, millennials in countries like China and India prefer to spend more on leisure activities, which is expected to have an impact on the region's craft spirit market.

The market includes both international and domestic participants. Key market players focus on strategies such as innovation and new product launches in retail to enhance their portfolio offering in the market.

Some of the key players operating in the craft spirits market include:

This report forecasts revenue growth at global, regional & country levels and provides an analysis of the latest trends and opportunities in each of the sub-segments from 2017 to 2030. For this study, Grand View Research has segmented the global craft spirits market on the basis of product, distribution channel, and region:

How big is the craft spirits market?

What is the craft spirits market growth?

Which segment accounted for the largest craft spirits market share?

b. North America dominated the craft spirits market with a share of 61.4% in 2021. This is attributed to the region's growing millennial population is expected to drive demand. Because of secure approval policies developed by regulatory bodies, the number of manufacturers in the United States has increased at a rapid rate.

Who are the key players in the craft spirits market?

What are the factors driving the craft spirits market?

b. Key factors that are driving the craft spirits market growth include rising demand for craft spirits, an increase in the number of craft distilleries, and rising disposable incomes. The millennial population with considerable purchasing power is expected to drive the market over the forecast period.