The global distributed energy generation market size was valued at USD 242.6 billion in 2019 and is expected to grow at a compound annual growth rate (CAGR) of 11.5% from 2020 to 2027. Factors, such as growing environmental awareness, increasing government policies and Greenhouse Gas (GHG) emission reduction targets, and demand for energy, are expected to drive the market over the forecast period. Increasing R&D initiatives for the development of new technologies are also expected to augment the market growth. Schemes and incentives by the governments, such as feed-in-tariff in North America and the Asia Pacific, are likely to fuel the demand for DEG systems. Government schemes are aiming to promote the installation of such systems across industrial, residential, and commercial applications. These systems can be operated on-grid as well as off-grid depending on the application as well as their location. Moreover, various benefits of DEG over conventional energy generation methods are expected to fuel the market growth. 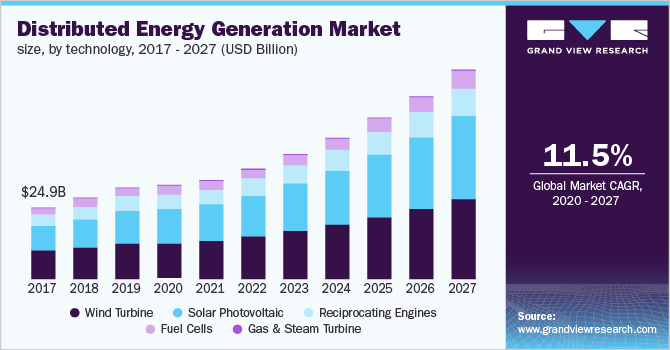 The U.S. market is anticipated to witness significant growth from 2020 to 2027. The deployment of DEG technologies has increased since 2014 owing to the adoption of supportive government policies, such as Production Tax Credit (PTC) that provides a per-kilowatt-hour tax credit for the electricity generated by DEG resource and Investment Tax Credit (ITC) that allows the tax credit to be taken based on the amount invested instead of the electricity produced.

Current development in regulatory policies across North America has resulted in the progress of the overall market. Factors including provincial renewable energy policy improvement in Canada, and successful implementation of energy auctions in Mexico, are resulting in a bigger deployment rate of DEG technologies in the region. Rising usage of solar PV rooftop arrangements for commercial and residential applications is assessed to be one of the vital trends that are boosting the market growth.

The COVID-19 pandemic has enormously stuck the Chinese economy with various other trade commotions. China, being one of the largest exporters of DEG goods, has observed an immense decline in the trading sector, due to lockdowns imposed in several parts of the countries. This is likely to affect the market as the companies are pulling out of new investments and the government is cutting down the subsidies. 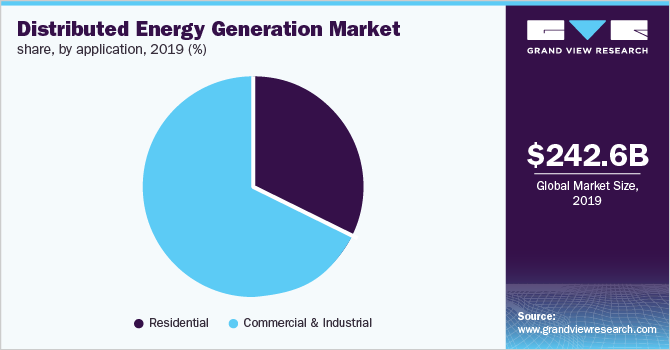 The MEA is expected to grow at a significant rate owing to the increased adoption of DEG for industrial applications. The solar PV system market has been growing substantially, particularly in South Africa, owing to the growing need for clean energy, which, in turn, is expected to fuel the market in MEA. The availability of solar and wind energy in MEA countries, particularly in Saudi Arabia and Egypt, is one of the primary factors attracting various end-use industries to opt for renewable energy sources.

The market is highly competitive owing to the increasing competition at the global level as the market is leading towards the lowering of the technological cost. The companies are investing in research and development to innovate new technologies. Some of the prominent players in the distributed energy generation market include:

This report forecasts revenue growth at global, regional, and country levels and provides an analysis of the latest industry trends in each of the sub-segments from 2020 to 2027. For the purpose of this study, Grand View Research has segmented the global distributed energy generation market report on the basis of technology, application, and region: