The global downhole tools market size was estimated at USD 3.57 billion in 2017. Rising E & P activities in deep-sea bed associated with drilling and completion efficiencies is resulting in maximization of production rates by industry participants. This, in turn, has worked in favor of the market.

Ongoing demand for technologically advanced tools that function optimally in high-pressure and high temperature (HPHT) conditions, for enhancing the rate of penetration (ROP) is also anticipated to stoke the growth of the market. companies are continuously focusing on developing new technologies to sustain the competition and also to enhance drilling activities with higher ROP and minimal cost involvement. 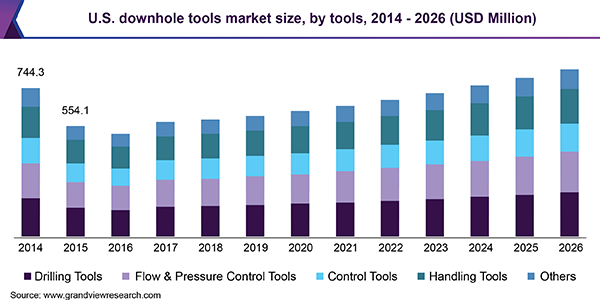 Significant oilfield developments in Texas, the Gulf of Mexico, and North Dakota, coupled with supportive governmental regulations for unconventional hydrocarbon reserves, are projected to boost the growth of the market. Furthermore, increased environmental risks and maintenance costs associated with offshore locations have urged companies to deploy advanced tools for cost-efficient E & P activities.

Ongoing technological advancements for E & P activities are poised to be one of the primary growth stimulants for the market. Moreover, rather than offering operators with a list of tools provided, service providers have advanced the trend to deliver optimized solutions and technologies to overcome challenges faced by operators.

High-capital investments for new product development, coupled with risk factors related to their ability to withstand extreme operational environments, are likely to inhibit the growth of the market. Nevertheless, the leading market participants are focusing on curbing costs and optimizing operational efficiencies with funding from numerous publicly-traded companies.

On the basis of product, the drilling tools segment is expected to dominate the market through 2026. The growth of the segment can be attributed to heightened rates of drilling activities in various economies such as Argentina and Colombia. This is further supported by recommencing of onshore drilling in countries such as Libya & Republic of Congo, new drilling project startups in Qatar and China, and increased drill bit sales in Algeria.

The global market for handling tools and flow & pressure control tools is also estimated to witness substantial growth over the forecast period owing to their increasing applications in the production phase. These tools are useful in addressing several challenges such as extreme depth, high temperatures, and pressure differentials associated with producing formations.

Based on application, the downhole tools market has been segmented into well intervention, drilling, production & well completion, and formation and evaluation. The production & well completion segment is anticipated to hold the largest share in the market, followed by well drilling. The equipment demand in well drilling applications is projected to amount to over USD 1.43 billion by 2026. 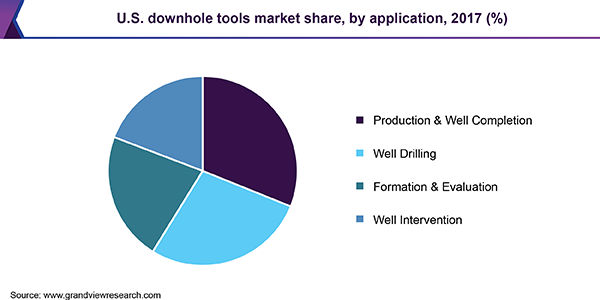 Revenue generated by North America increased marginally by 1.3% in 2017 as compared to 2016, as a result of enhanced land activity and partially offset by lower foreign revenue. In addition, recommence of several shale plays in the U.S. during the last few years, assisted by key participants, provided a great impetus to the growth of the market in the region.

European countries such as the U.K. and Norway are likely to witness high development, especially in offshore basins, owing to increased deep-sea drilling activities in North Sea. Furthermore, recent developments in offshore activities such as rising oil production in various economies such as Iran and Qatar are expected to spur the offshore E & P in the Middle East over the coming years.

Operators have been focusing on countries in the Middle East and North Africa in order to implement various new downhole tools technologies. Global players are also exploring new horizons for gaining higher profits from rising supply of crude oil in the region. For instance, in the Middle East, increased demand for advanced downhole technologies has allowed Halliburton to build a leading position in project management and to grow its market share, enhance ROP, and lower the cost of drilling wells.

The market is marked by the presence of key multinational players that are actively engaged in mergers & acquisitions, technological innovations, research & development, and partnerships to improve their dominance among competitors. Furthermore, companies such as Halliburton, Schlumberger, and Weatherford International have invested in the expansion of their production capabilities to enhance their portfolios and regional presence.

This report forecasts revenue growth at the global, regional, and country levels and provides an analysis of the industry trends in each of the sub-segments from 2014 to 2026. For this study, Grand View Research has segmented the global downhole tools market report on the basis of product, application, and region: