The global dye sensitized solar cell market size was valued at USD 90.5 million in 2019 and is expected to grow at a compound annual growth rate (CAGR) of 12.4% from 2020 to 2027. Growing awareness among buyers about adverse environmental impacts associated with non-renewable source-based power farms, along with growing dependence on unconventional sources of energy, is estimated to boost the market growth over the projected period. Technical innovations have resulted in a good price to the presentation ratio of such solar cells, which is estimated to positively influence market growth. DSSC technology is projected to address the three common energy requirements of the future, including economic growth, energy security, and environmental protection. Advantages related to a dye sensitized solar cell (DSSC), such as cost-effectiveness, high-performance ratio, and ability to provide electricity at low light conditions, are predicted to boost demand over the projected period. 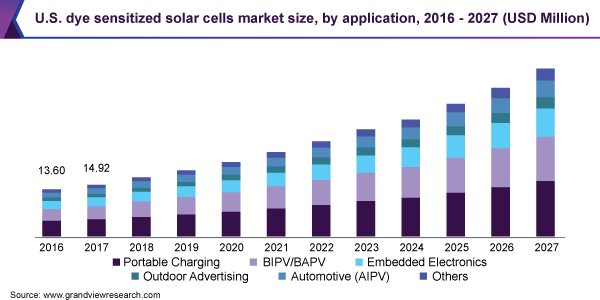 The U.S. dominated the North America market in 2019 and is expected to reach USD 48.2 million by 2027. The U.S. market for DSSC was dominated by the portable charging application segment. Besides, the rising concerns over the effects of non-renewable sources of energy are likely to fuel the demand in the country.

Growing demand for renewable sources of energy, such as solar power energy, is the main factor enhancing market growth. The market is also gaining demand from the recent technical advancements, which has resulted in a decrease in the production cost. Producers of DSSCs are focusing on portable or indoor applications. Hence, these cells are projected to gain scope in key application segments, including outdoor advertising, electronics, automotive, steel roofing, and bus shelters.

Growing ecological concerns owing to the growing carbon emissions are also projected to fuel demand for DSSCs over the projected timeframe. The European countries have been continuously focusing on decreasing emissions by stimulating and subsidizing the use of renewable sources of energy. Besides, the market is likely to gain incentives from the growing demand for BIPV.

Based on applications, the market is segregated as outdoor advertising, portable charging, embedded electronics, BIPV/BAPV, and automotive (AIPV). The portable charging application segment accounted for the largest share of 33.3% in 2019. Rising demand for dye sensitized solar cells in portable charging owing to their capability to provide optimal wattage in such applications is estimated to boost the segment growth over the projected timeframe. 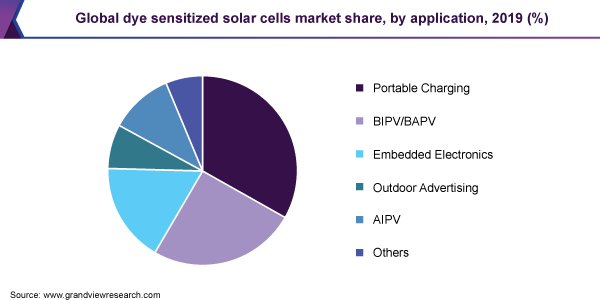 Application of dye sensitized solar cells in building applied photovoltaics (BAPV) and building-integrated photovoltaics (BIPV) is projected to expand at the fastest CAGR of 13.0% during the forecast period. Increasing demand to cater to growing energy needs from residential areas, such as roof-top panels and water heating, is anticipated to drive the application segment over the forecast period.

Numerous developers are working to take the benefit of the ability of dye sensitized solar cells to electrify many off grid-based lighting applications. A variation in low-power user applications is projected to arise in the global market. Initial growth, along with high commercialization of solar-powered small appliances, is projected to drive dye sensitized solar cells demand in the application segment over the upcoming years.

Besides, initiatives taken by the European countries, such as zero energy buildings to decrease carbon footprints, are estimated to boost the demand over the upcoming years. Dye sensitized solar cells' demand across the AIPV application is projected to observe average growth over the projected period. Rising user demand for interior ambient lighting in vehicles is likely to boost energy needs across automobiles.

Cost-effective dye sensitized solar cell units are used in the sectors, such as automotive, to meet energy needs across various regions. Increasing demand for smart automobiles, along with parking supervision arrangements, is likely to propel DSSC demand in automotive integrated photovoltaics applications. The growing automotive integrated photovoltaics market, mostly across North America and Europe, is expected to boost the market growth across the regions.

Europe dominated the DSSCs market in 2019 with a share of 38.2%. The European Commission aims to decrease the dependence on non-renewable sources by encouraging clean energy projects, which is expected to boost the market growth in the region. Furthermore, the high rate of implementation in BIPV, usage of the latest technologies, and increasing portable electronics applications are projected to steer the demand for DSSCs in the upcoming years.

North America emerged as the second-largest regional market in 2019. In the Middle East and Africa, continuing sizable investments in the development of DSSC will favor market growth as the product provides better performance under high temperature and low irradiance levels.

The market is slightly concentrated owing to the presence of numerous large and small market players. Major industry players are adopting numerous strategies, including collaborations, to surge their market share. The product is a solar cell that belongs to the thin-film solar cells family. Furthermore, DSSC is based on a semiconductor that is designed between an electrolyte as well as a photo-sensitized anode. Such products are semi-flexible and semi-transparent, which are made up of materials like platinum and ruthenium. Dye-sensitized solar cells are made by using roll-printing techniques and such raw materials are provided at reasonable costs by the raw material manufacturers. Besides, launching such new tools both in terms of economies of scale and performance will propel the industry trends. Some of the prominent players in the dye sensitized solar cell market include:

This report forecasts revenue growth at the global, regional, and country levels and provides an analysis of the latest industry trends and opportunities in each of the sub-segments from 2016 to 2027. For the purpose of this study, Grand View Research has segmented the global dye sensitized solar cell market report based on application and region:

What are the factors driving the dye sensitized solar cell market?

How big is the dye sensitized solar cell market?

What is the dye sensitized solar cell market growth?

b. Europe dominated the dye sensitized solar cell market with the highest share of 38.17% in 2019. The high rate of implementation in BIPV, usage of the latest technologies, and portable electronics applications is further projected to steer the demand for DSSCs in Europe.

Who are the key players in dye sensitized solar cell market?