The global endoscopes market size was valued at USD 12.6 billion in 2021 and is expected to expand at a compound annual growth rate (CAGR) of 9.4% from 2022 to 2030. The rise in prevalence of chronic disorders and the growing awareness of early detection of diseases through minimally invasive surgical procedures are some of the major factors anticipated to drive the market growth over the forecast years. In addition, favorable reimbursement policies, and increasing FDA approvals for endoscopic devices are also expected to boost the growth of the market over the years. For instance, in 2021, the United States Food and Drug Administration granted 510(k) clearance to EndoFresh’s disposable digestive endoscopy system, a device developed to reduce the chance of contamination in gastrointestinal procedures. 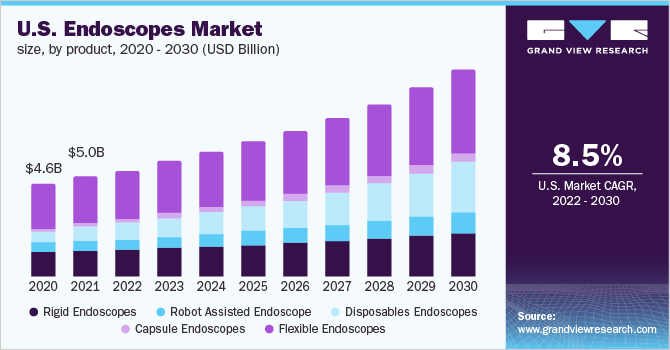 In addition, obesity is a growing serious health problem globally due to unhealthy lifestyles and diets. It is associated with several gastrointestinal disorders, such as esophageal adenocarcinoma, erosive esophagitis, gastroesophageal reflux disease, colorectal polyps, and cancer. As per the Organization for Economic Co-operation and Development (OECD) data, the obesity rate is expected to grow at a significant rate by 2030. Nearly 47%, 39%, and 35% of the population in the U.S., Mexico, and England respectively are expected to be obese by 2030. Bariatric surgery is the most effective treatment option resulting in significant weight loss. However, the emergence of minimally invasive endoscopic sleeve gastroplasty procedures significantly reduces stomach volume.

It is performed through patients’ mouths unlike traditional bariatric surgery using a flexible endoscope. Hence, the increase in demand for minimally invasive endoscopic bariatric procedures is further anticipated to drive market growth over the years. Furthermore, the growing global burden of cancer all over the world is also driving the demand for endoscopes for early diagnosis and treatment. For instance, according to Globocan 2020 report, the estimated number of new cancer cases was 19.3 million in 2020 and the number of deaths that occurred due to cancer was about 10 million. Thus, increasing demand for endoscopic biopsy to diagnose cancer is anticipated to drive the market growth during the forecast years.

A decrease in the number of endoscopic procedures during the COVID-19 pandemic hampered the market growth in 2020. Due to the risk of cross-contamination and the chance of SARS-CoV-2 transmission, several endoscopic facilities have canceled or postponed the elective, and semi-urgent procedures, which is restraining the market growth during this period. Furthermore, supply chain disruption and changing regulations to curtail the infection are also some of the major factors that hindered the growth of the market in 2020. For instance, a study on the endoscopy unit of the Cancer Institute of the State of São Paulo (ICESP), published in Clinics (Sao Paulo) journal in 2021, stated that there is a 55% reduction in the endoscopic procedure during the pandemic and the colonoscopy is the most affected modality (-79%).

The flexible product segment accounted for the highest revenue share of more than 46.5%of the global market in 2021. It is attributed to its increasing preference by healthcare professionals for the first-line therapeutic option as it can be performed under sedation. The cost-effectiveness, safety, and high-efficiency properties of flexible endoscopes also boost their adoption. In addition, flexible endoscopes are used in several surgical applications, such as gastrointestinal endoscopy, laparoscopy, arthroscopy, urology endoscopy, obstetrics/gynecological endoscopy, bronchoscopy, otoscopy, mediastinoscopy, and laryngoscopy. This increases their adoption and thereby fueling the segment growth.

On the basis of product, the global market has been segmented into rigid, flexible, capsule, disposable, and robot-assisted endoscopes. The disposable endoscopes segment is anticipated to register the fastest growth rate during the forecast period. This growth can be attributed to the increasing preference for these devices over conventional endoscopes to reduce the risk of cross-contamination. In addition, the adoption of disposable devices was higher during the COVID-19 pandemic as these devices reduce the risk of nosocomial disease spread.

The Gastrointestinal (GI) endoscopy application segment dominated the market and accounted for a share of more than 51.5% of the global revenue in 2021. The high share can be attributed to the increased burden of functional gastrointestinal diseases and the rising geriatric population across the globe. In addition, an increase in the number of upper gastrointestinal procedures performed and the growth in the adoption of endoscopes for the treatment and diagnosis of gastrointestinal diseases are also among the key factors driving the segment growth.

On the basis of applications, the global market has been divided into Gastrointestinal (GI) endoscopy, laparoscopy, obstetrics/gynecology endoscopy, arthroscopy, urology endoscopy (cystoscopy), bronchoscopy, mediastinoscopy, otoscopy, laryngoscopy, and other applications. The urology endoscopy application segment is estimated to register the fastest growth rate over the forecast period. This growth can be credited to the increasing prevalence of urologic cancers and the growing volume of urology surgeries. In addition, the growing preference for endoscopic devices for the diagnosis and treatment of urologic disorders is also propelling the segment growth.

The hospital's end-user segment dominated the market in 2021 with a revenue share of more than 48%. It is attributed to the increasing product preference among patients for chronic disease treatment. In addition, favorable infrastructure and reimbursement policies also support the segment growth. Moreover, a large number of surgeries are performed in hospitals and it is considered the primary health care system in the majority of the countries. As compared to other healthcare systems, the maximum number of surgeries are performed in the hospitals, which, in turn, boosts the segment growth. 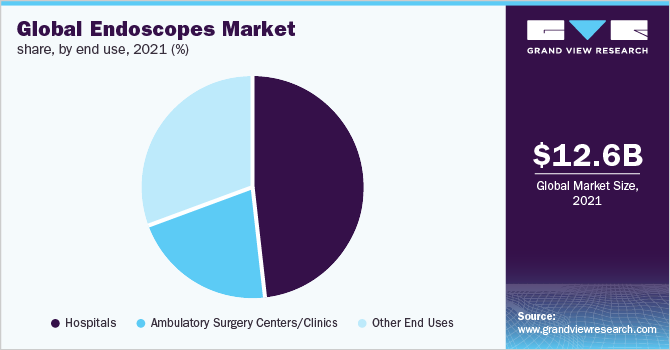 The Ambulatory Surgical Centers (ASCs)/clinics segment is anticipated to grow at the fastest CAGR during the forecast years. Increasing adoption of endoscopes in the ASCs/clinics for the early diagnosis and detection of several life-threatening diseases is supporting the segment growth. In addition, the introduction of keyhole endoscopic surgeries with minimal discomfort and faster recovery time also boosts the segment growth. Moreover, due to shorter stays, lower cost of procedures is further anticipated to augment the segment growth over the forecast years.

North America led the market in 2021 and accounted for the highest share of more than 41.5% of the global revenue. The regional market is estimated to retain the dominant position throughout the forecast period owing to the increasing adoption of elective endoscopic procedures, improved healthcare expenditure, and the high geriatric population. In addition, the high burden of cancer and functional gastrointestinal disorders in the U.S. is anticipated to further drive the market over the forecast period. For instance, according to the American Cancer Society, about 1.9 million new cancer cases are estimated to be diagnosed in 2021 in the U.S.

On the other hand, Asia Pacific is projected to be the fastest-growing regional market over the forecast period. This growth is owing to the presence of a large patient population pool suffering from functional gastrointestinal disorders. Some of the other factors contributing to the growth of the APAC regional market include the growing geriatric population and improving healthcare infrastructure. In addition, rapid economic development and increasing government healthcare investments are projected to attract foreign investments in this region. Moreover, the presence of key players in APAC is also fueling the adoption of endoscopes, which, in turn, supports the regional market growth.

The key manufacturers in the market are looking forward to investing more in the development of technologically advanced devices. The growing demand for a different type of endoscopes increases the competition among market players to expand their product portfolio and global presence. Moreover, key industrial strategies, such as collaboration, merger, and acquisition, have also been undertaken by top market players to increase their market share. For instance, in January 2021, Olympus Corp. acquired Quest Photonic Devices to strengthen its presence in the surgical endoscopy market. Some prominent players in the global endoscopes market include:

This report forecasts revenue growth at the global, regional, and country levels and provides an analysis of the latest industry trends in each of the sub-segments from 2014 to 2030. For the purpose of this study, Grand View Research, Inc. has segmented the global endoscopes market report on the basis of product, application, end use, and region:

How big is the endoscopes market?

What is the endoscopes market growth?

Which segment accounted for the largest endoscopes market share?

b. Flexible endoscopes dominated the endoscopes market with a share of 46.6% in 2021. This is attributable to their ergonomics features, increased safety, efficiency, and advancements in medical-optics technology thus driving the demand and consumption of flexible endoscopes.

Who are the key players in the endoscopes market?

What are the factors driving the endoscopes market?

b. Key factors that are driving the endoscopes market growth include an increasing geriatric population; a growing preference for minimally invasive surgeries; and a rise in incidences of cancer, gastrointestinal diseases, and other chronic diseases.