The global energy harvesting system market size was valued at USD 452.2 million in 2020 and is expected to grow at a compound annual growth rate (CAGR) of 10.2% from 2020 to 2028. The growing applications of the Internet of Things (IoT) including smart cities, smart homes, Industrial IoT (IIoT), and Machine-to-Machine (M2M) communications, among various others are further expected to drive the market. Factors, such as growing environmental awareness, supportive government policies, and Greenhouse Gas (GHG) emission reduction targets, and rising demand for energy are expected to drive the market over the forecast period. Increasing R&D initiatives for the development of new technologies are also expected to augment the market growth. 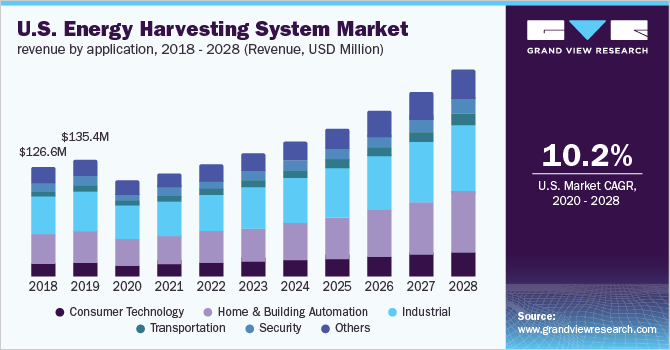 The U.S. accounted for the largest share of the North American regional market in 2020. The U.S. is among the early adopters of energy-efficient solutions in the world for sectors, such as power generation and energy harvesting. This can be attributed to the increased importance given to clean energy solutions as per the energy act introduced by the U.S. government.

North America, led by the U.S., Mexico, and Canada, accounted for the second-largest revenue share of the global market in 2020 owing to the presence of intelligent building and building automation vendors. Favorable policies and regulations regarding increasing energy efficiency of buildings and high awareness regarding green buildings have driven the market growth.

The COVID-19 pandemic is expected to hinder the market growth to some extent owing to reduced demand from various end-users. The product manufacturers have taken subsequent steps to provide services to end-users that have signed long-term contracts with them.

The vibration technology segment led the market in 2020. The segment accounted for the maximum revenue share of more than 32% of the global market in 2020. Vibration or mechanical energy harvesting is done by converting the ambient vibrations into electric energy with the help of piezoelectric, electromagnetic, electrostatic, and electrodynamic technologies.

Thermoelectric Generators (TEGs) are used to convert ambient thermal energy into electric energy. These devices consist of thermopiles, which further consist of n-type and p-type junction that allows heat flow between these terminals and leads to electricity generation. The light technology segment is projected to record the fastest CAGR of more than 10.5% during the forecast years.

The piezoelectric vibration technology segment led the market in 2020 and accounted for a revenue share of more than 48%. The piezoelectric energy harvesters convert ambient kinetic energy, which is present in the form of shocks or vibrations, into electricity. These generators (energy harvesters) offer a consistent and robust solution by converting typically wasted vibrational energy in the environment into usable electrical energy.

The electrostatic vibration technology segment is estimated to register the fastest CAGR over the forecast period. This technology uses a variable capacitor structure that generates electricity from the relative motion between adjacent plates. Electrodynamic energy harvesting systems convert ambient vibration into electricity by the relative motion of magnets and electrical conductors. These systems are most commonly implemented in key card switches for home and building automation applications, cooling fans, motor engines, internal gears, and ventilation systems.

The sensor component segment led the market in 2020 with a revenue of more than 34.5%. On the basis of components, the global market has been divided into sensor, transducer, Power Management IC (PMIC), secondary/backup battery, and others. Sensors are one of the most crucial components of an energy harvesting system. They are responsible for collecting ambient light energy, kinetic motion, temperature differences, and pressure changes to convert into energy.

In an energy harvesting system, the generated power is stored in a capacitor or a small rechargeable battery for later use. The secondary/backup battery segment is estimated to register the fastest CAGR over the forecast period. Cymbet is one of the leading innovators in offering secondary/backup batteries. Other components include resistors, capacitors, transistors, diodes, and others, which are required to assemble a complete energy harvesting unit.

The industrial segment led the global market in 2020 with a maximum revenue share of more than 30.5%. In industrial applications, energy harvesting systems capture the ambient shaking, rotation, and vibration from machines and structures in industrial facilities and convert these sources into usable energy. Industrial applications are growing due to the evolution of IIoT. However, home & building automation is estimated to be the largest application segment by 2028 growing at the fastest CAGR over the forecast period. 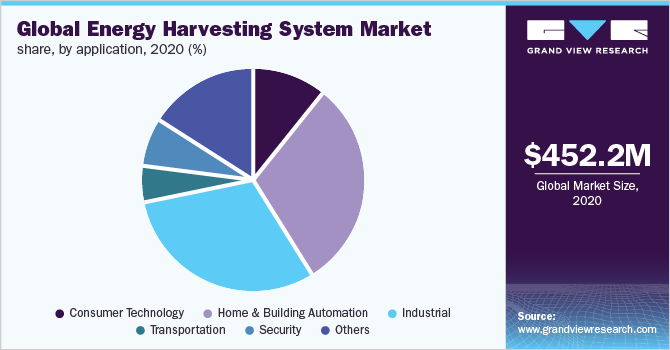 Factors, such as the growing urban population, rising scope of application of IoT components in automation, high demand for power-efficient, safe, and durable systems, an emerging trend of renewable energy integration, and high product penetration in building and home automation applications, are driving the segment. Following the recent boom in the adoption of IoT, safeguarding and monitoring devices, such as security and access control devices, are being widely adopted across various verticals.

Asia Pacific is expected to be the fastest-growing regional market over the forecast period due to the high purchasing power and growing tech-savvy population in the region. Many industry players are also thinking of relocating their manufacturing facilities to Asia Pacific due to low operational and labor costs. Such factors will further help in the growth of the IoT systems, fueling the market growth.

In India, “100 Smart Cities Mission” was launched in June 2015. A fund of USD 14 billion was approved by the government for the implementation of 100 smart cities and also for the rejuvenation of 500 other cities. Under the first round of the “All India City Challenge” competition, 20 cities were selected in January 2016.

In Middle East and Africa, major countries, such as Saudi Arabia, UAE, South Africa, and Egypt, have introduced plans to deploy the construction of smart cities over the next few years. The governments in these countries are taking significant steps for funding and inviting private sector companies to deploy their smart solutions in under-constructed smart cities.

The global market is highly competitive due to the presence of major companies across the regions. Companies operating in the global market are emphasizing expanding their global footprints to increase revenue and market share. Companies are expanding their services in the Asia Pacific, Central & South America, and Europe regions to cater to the rising needs of the emerging economies. Some of the prominent players in the global energy harvesting system market include:

This report forecasts revenue growth at global, regional, and country levels and provides an analysis of the latest industry trends in each of the sub-segments from 2017 to 2028. For the purpose of this report, Grand View Research has segmented the global energy harvesting system market report on the basis of technology, vibration technology, component, application, and region:

How big is the energy harvesting system market?

What is the energy harvesting system market growth?

b. Europe, led by the Germany, UK, Italy, and France, accounted for nearly 38.0% of the global energy harvesting system market share in 2020 owing to the presence of the intelligent building and building automation vendors.

Who are the key players in the energy harvesting system market?

What are the factors driving the energy harvesting system market?