The global energy storage systems market demand was valued 211.24 GW in 2021 and is progressing at a compound annual growth rate (CAGR) of 11.0% from 2022 to 2030. Growing demand for efficient and competitive energy resources is likely to propel market growth over the coming years. Clean & renewable energy is an affordable alternative to fossil fuel-based electricity. It’s use can help curb the overdependence on fossil fuels, reduce greenhouse gas emissions & subsequently air pollution, and diversify the power supply. 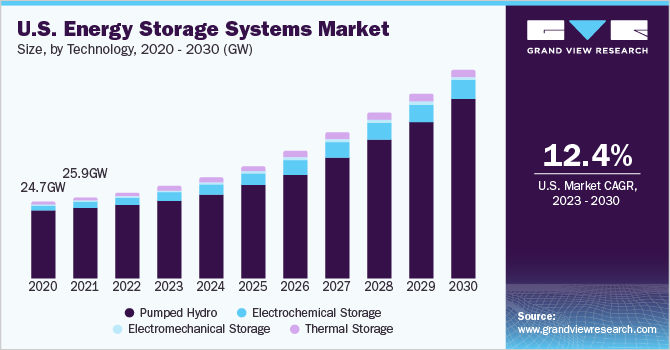 An increasing number of data storage centers coupled with rapidly growing competition in numerous sectors including IT and finance is expected to augment the demand during the forecast period. In addition, changing consumer lifestyles and a rising number of power outages are projected to propel utilization in the residential sector.

Energy storage systems in the U.S. were 25.97 GW in 2021 and are expected to reach 65.32 GW by 2030. The market is estimated to expand at a CAGR of 11.4% during the forecast period. The size of the energy storage industry in the U.S. will be driven by rising electrical applications and the adoption of rigorous energy efficiency standards. The industry's growth will be aided by a growing focus on lowering electricity costs, as well as the widespread use of renewable technology.

According to the Institute for Energy Economics and Financial Analysis (IEEFA), in 2018, investments in renewable power production technologies, dominated by solar and wind energy, totaled USD 64.2 billion in the United States. Increased expenditures in the building of new power system networks, as well as ongoing measures to upgrade current distribution infrastructure, will support market growth in the U.S.

The market is likely to be boosted by ongoing expenditures in the Asia Pacific and North America to upgrade energy infrastructure and increase on-grid capacity. Long-term demand for pumped hydro storage (PHS) is predicted to be driven by favorable compliance regulations and rising electricity consumption in China and the United States. 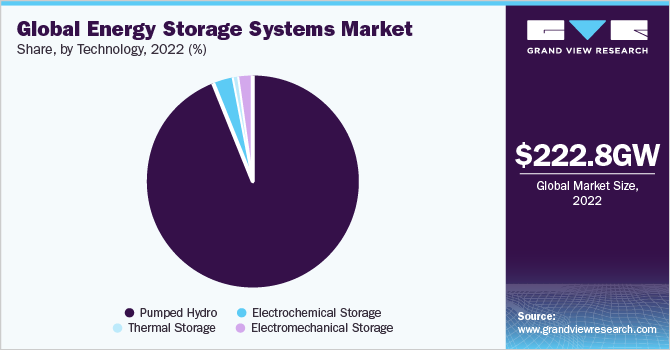 Thermal Energy Storage (TES) systems gather and store surplus thermal energy generated by a variety of technologies for later use. Latent, sensible, and thermochemical TES systems are examples of several types of TES systems. Bricks, sand, water, rock beds, air, and concrete are some of the storage mediums employed in sensible heat storage.

The Asia Pacific was the largest segment in 2021 and accounted for more than 46% of the overall market share, owing to the presence of fast-growing economies such as China and India. Energy storage devices are critical in applications such as UPS and data centers as this region is prone to frequent power outages. The market in this region has been pushed by the benefits of modern energy storage systems, such as cost-effectiveness, environmental friendliness, and reliability.

The energy storage authorities in the aforementioned European countries have chosen battery energy storage technologies to expand the use of renewable energy sources while reducing reliance on fossil fuels. The long-term growth of the market is likely to be aided by the growing popularity of electric vehicles in countries such as Germany and France.

For investments in the automotive, energy, and biochemical industries, Central and South America is a promising location. Brazil, Argentina, Peru, Colombia, and Chile are all important countries in the region. Argentina is anticipated to see a significant slowdown in energy investment as the country emerges from its current recession in the coming years. Countries in the Asia Pacific region are largely developing countries that are undergoing rapid industrialization.

The market is characterized by the presence of several key players and a few medium and small-scale regional players. Many of the companies have their own sector that they focus on and have a very high penetration in that sector. For instance, In August 2021, Active Power announced planning a U.S. road trip to bring its containerized POWERHOUSE UPS to users’ doorsteps. Under this strategic initiative, Active Power engineers will be partnering with sales and service partners to deliver a series of live demonstrations around the US to exhibit the POWERHOUSE UPS. The U.S. tour will begin in October and is expected to run through 2022.

Some of the prominent players operating in the global energy storage systems market are:

This report forecasts revenue growth at global, regional, and country levels and provides an analysis of the latest industry trends in each of the sub-segments from 2019 to 2030. Grand View Research has segmented the global energy storage systems market report based on technology and region:

How big is the energy storage systems market?

What is the energy storage systems market growth?

b. The pumped hydro segment accounted for a volume share of more than 95.0% in the global energy storage systems market in 2021. The segment accumulated the largest share due to its use in balancing of fluctuating output of intermittent renewable sources and baseload power plants.

Who are the key players in the energy storage systems market?

What are the factors driving the energy storage systems market?

b. Key factors driving the energy storage systems market growth include the increasing development of variable energy sources. Variable energy is fluctuating by nature due to frequent climate changes. Wind and solar power generation cannot be controlled like geothermal, biomass, and hydroelectricity.