The global enhanced oil recovery market size was valued at USD 38.83 billion in 2021 and is expected to expand at a compound annual growth rate (CAGR) of 7.8% from 2022 to 2030. An increasing number of aged wells, along with decreasing production from existing oilfields, is expected to drive the market demand over the forecast period. 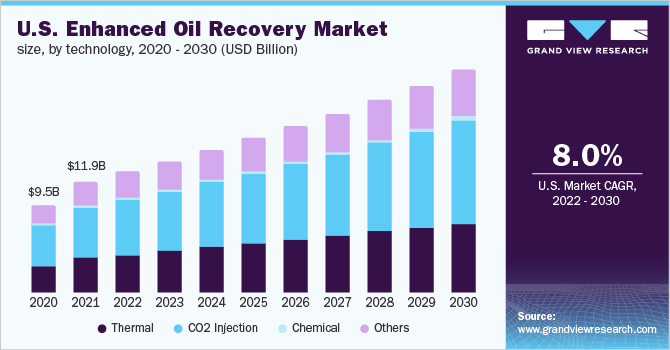 Enhanced oil recovery (EOR) technology enhances oil production from mature and aged oil fields, by almost 10 to 20 percent when compared to conventional oil extraction methods. Mature wells are those oil reserves where production has reached its peak and has started to decline owing to poor permeability or exhibiting heavy oil. Technically, EOR increases the permeability of the reservoir so that hydrocarbons can flow through the pathways easily and into the targeting producing well.

The U.S. market is anticipated to witness significant growth on account of the growing exploration of unconventional oil and gas resources. Furthermore, government funding aimed at commercializing the EOR technology is anticipated to positively influence the industry landscape. For instance, the U.S. Department of Energy (DoE) provides funding to private companies and universities in order to carry out research for advancements in EOR technologies

Further, a number of CO2 injection-based EOR projects started from 2017 to 2020 in the U.S., which resulted in the dominating share of CO2 injection technology over other available technologies in the country. For instance, the oil production in the Permian Basin has shown a significant rise in oil production by the use of CO2-EOR technology. These market developments are expected to boost the growth of the market in the U.S. in the forecast period

Falling crude oil prices are expected to have a negative impact on the oil and gas industry and may restrain the market growth over the forecast period. The COVID-19 pandemic led to a drastic drop in oil prices in 2020. This resulted in reductions in planned capital expenditure and the implementation of cost-cutting actions by oil players across the globe, which is expected to hinder the growth of the market.

However, a rise in environmental concerns regarding carbon emissions has resulted in enhancing the demand for carbon capture and storage (CCS), which has emerged as a viable solution to limit carbon emissions. These factors are expected to positively impact the market growth as captured carbon in CCS projects is usually utilized by oil and gas companies for CO2 injection EOR technology.

The thermal segment occupied the largest revenue share of over 35.0% in 2021. The method entails the application of heat to the oil wells for lowering the oil viscosity and increasing its mobility ratio. It is mostly applied in shallow wells with higher viscosity, for instance, heavy oil and tar sand. This technology is being utilized in countries such as the U.S., Canada, Oman, and Russia

CO2 injection technology injects CO2 into the rock pores to recover the crude oil. CO2 is miscible with crude oil and is comparatively less expensive than other similar miscible fluids used for these applications, making it a preferred choice for EOR applications. In addition, this method provides highly significant environmental benefits, thereby driving the demand for CO2 injection technology in the market in the forecast period.

Further, stringent government regulations regarding emission reduction from the oil industry activities are resulting in the improved adoption of CCS technology, wherein the carbon released from refineries is captured and injected into depleting oilfields for the EOR process. These factors will boost the growth of CO2 injection technology in the future.

Chemical EOR technology involves the use of polymers and surfactants, which are injected into the oil well, which reduces interfacial pressure and enhances flooded viscosity, thereby increasing the production from the oil well. Chemical-based EOR technology is being utilized in countries such as China, Russia, Colombia, and Canada.

The onshore segment occupied the largest revenue share of over 90.0% in 2021 owing to the significant presence of onshore exploration and production projects across the world. Lower conventional extraction costs for onshore oilfields, when compared to offshore oilfields, will result in the growth of the onshore application segment in the future. EOR techniques are being deployed in conventional onshore basins, witnessing declining production levels across Saudi Arabia, Russia, and China. These factors are expected to positively influence the growth of the segment in the forecast period. 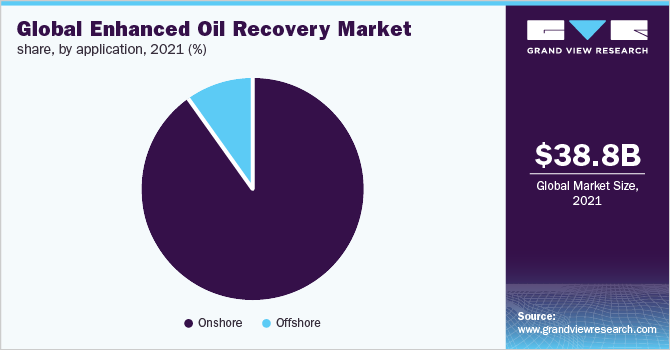 The steady development of the existing offshore wells, particularly in the South China Sea, the Persian Gulf, the North Sea, and the Gulf of Mexico, is expected to drive the offshore segment over the forecast period. Further, operators such as BP, Statoil, and Repsol are testing the techno-economic feasibility of EOR in offshore oil fields.

North America dominated the market and accounted for a revenue share of more than 35.0% in 2021. The U.S. is the major contributor to the regional market growth. The growth can be attributed to the presence of several unconventional oil and gas resources and matured fields in the country, requiring advanced extraction techniques to boost production from existing wells. Further, leading oil and gas exploration companies in Canada are utilizing EOR technology to efficiently recover the oil from fields.

Increasing government funding for EOR projects is expected to further commercialize the technology. For instance, in 2019, U.S. DoE announced USD 40 million in funding for research and development activities aimed at reducing the technical risk in enhanced oil recovery while simultaneously expanding EOR applicability across conventional and unconventional reservoirs.

The Asia Pacific is anticipated to witness the highest growth over the forecast period, with China occupying the largest share across the region. Rising oil and gas demand from major economies including China and India, along with the increased deployment of EOR in aged wells to meet the production targets, is estimated to bolster the market demand in the Asia Pacific.

Market players are venturing toward extracting oil from existing reserves to maximize their production targets. Moreover, increasing investments in R&D activities in order to develop cost-effective oil recovery technology is expected to fuel the industry's growth. Some prominent players in the global enhanced oil recovery market include:

This report forecasts volume and revenue growth at the global, regional, and country levels and provides an analysis of the latest industry trends and opportunities in each of the sub-segments from 2019 to 2030. For the purpose of this study, Grand View Research has segmented the global enhanced oil recovery market report on the basis of technology, application, and region:

How big is the enhanced oil recovery market?

What is the enhanced oil recovery market growth?

b. Onshore was the largest application segment accounting for 90.10% of the total market in 2021 owing to a large number of matured onshore oil fields.

Who are the key players in enhanced oil recovery market?

What are the factors driving the enhanced oil recovery market?

b. Key factors driving the growth of the enhanced oil recovery market include the development of advanced technologies along with favorable government plans and policies.

COVID-19 will have a severe impact on the oil & gas industry as global oil demand is expected to decline in 2020. The demand for crude oil is anticipated to drop for the first time since 2009 due to reduced industrial activity and transport. With public transportation curbed significantly to contain the outbreak, gasoline prices are also expected to continue the downward spiral. Enhanced oil recovery being a tertiary recovery method is expensive as compared to conventional technologies. Therefore, the collapse in oil prices is expected to negatively affect the growth of the market in the near future. The updated report will account for COVID-19 as a key market contributor.