The global fluorescein angiography market size was valued at USD 498.8 million in 2019 and is expected to grow at a compound annual growth rate (CAGR) of 2.7% from 2020 to 2027. Increasing prevalence of various eye diseases, growing demand for early diagnosis, and supportive government initiatives are the major factors driving the market for fluorescein angiography. VISION 2020 is a global campaign by WHO for raising awareness among people about the implications of blindness as well as governments’ long-term professional and political commitment to eliminate blindness. International decision-makers and NGOs need to be convinced that human and financial resources provided for the elimination of blindness are a sound, returnable investment. 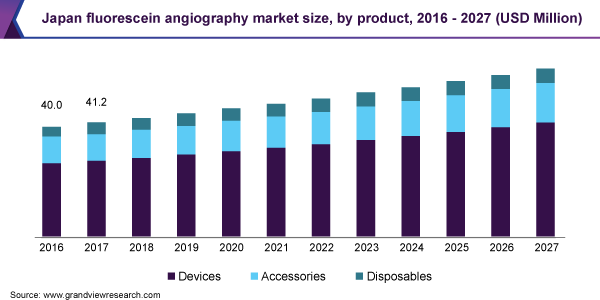 The current ophthalmology market is majorly driven by age and lifestyle-related diseases such as cataract, macular degeneration, glaucoma, and diabetic retinopathy. The increasing prevalence of eye-related disorders coupled with the rising geriatric population is expected to drive the fluorescein angiography market over the forecast period. Macular degeneration is a major cause of the eye-related disorder, often associated with aging, and results in damage of central and sharp vision.

Approximately 8.4 million people were suffering from blindness due to glaucoma in 2010 and this number is expected to reach 11.1 million by 2020, globally. People with glaucoma living in developing countries are particularly at a higher risk of it, progressing to blindness. According to the American Academy of Ophthalmology, the number of people living with glaucoma is expected to be 111 million by 2040, with Africa and Asia leading the rest of the world.

The device segment held a dominant revenue share of 66.1% in the market fluorescein angiography in 2019. Higher specificity and lower false-positive rates of fluorescein angiography (FA) system compared to optical coherence tomography (OCT), especially in the diagnosis of Wet Age-Related Macular Degeneration (wAMD) are factors expected to drive the segment. These devices also find application in monitoring the effectiveness of selected treatment methods, such as Anti-Vascular Endothelial Growth Factor (VEGF) in wAMD.

The frequent launch of integrated devices that can perform multiple ophthalmic tests within one system is expected to drive the market for fluorescein angiography. For instance, in August 2019, NIDEK announced the launch of multimodal ophthalmic technology-Mirante, which can perform fluorescein angiography, OCT, indocyanine green angiography, and capture high-quality retinal images in a single device by switching modes. These technologies have advantages such as increasing the diagnostic capabilities of physicians and saving floor space and cost.

The digital segment contributed a major share of 98.0% in the market for fluorescein angiography in 2019. Digital technology offers high-resolution images of retinal structures compared to conventional methods, such as contrast films. It also enables the user to adjust the brightness and contrast of the retinal images, to highlight certain details and zoom on the areas of concern.

With the advent of the digital imaging system, the process of picture archiving and retrieval has become easier, enabling quick comparison of images during diagnosis and treatment. Healthcare systems in many developed countries, such as the U.S. and Canada, are going paperless with increasing focus on electronic health records, to avoid discrepancies over reimbursement costs. Such factors are expected to further drive the growth of the segment.

The macular degeneration segment held the largest revenue share of 38.1% in 2019. The diabetic retinopathy is anticipated to show the highest growth rate over the forecast period due to the drastic increase in diabetes-related eye disorders. According to the International Association for Prevention of Blindness, there will be over 642 million people with diabetes by 2040 globally and around 35.0% of them are expected to be susceptible to diabetic retinopathy. 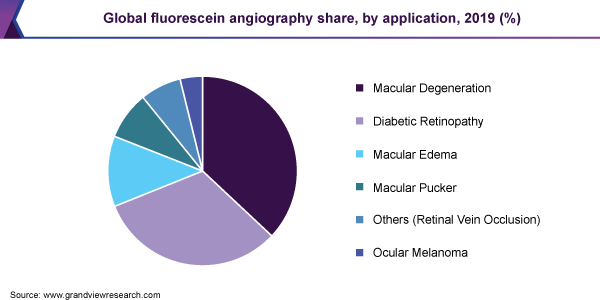 Furthermore, the introduction of AI in ocular diagnostics is expected to boost the growth of the market for fluorescein angiography. For instance, in Jan 2019, the FDA approved the usage of an AI system in a fundus camera called TRC-NW400 (Topcon Corporation) for diagnosis of diabetic retinopathy, enabling quick delivery of reports without the intervention of the ophthalmologist. This would help in reducing the workload of healthcare personnel and allow them to focus on priority activities.

Market players are continuously developing and launching advanced fundus cameras. For instance, in November 2015, Carl Zeiss introduced two new next-generation nonmydriatic VISUCAM 524 and VISUCAM 224 cameras at the American Academy of Ophthalmology in Las Vegas. These fundus cameras are used to diagnose various retinal diseases. Introduction of advanced features in cameras such as hybrid cameras, digital devices, and portability, rapidly increasing geriatric population, and high prevalence of chronic diseases such as diabetes are factors expected to boost the market for fluorescein angiography during the forecast period.

Increasing product launches, distribution agreements, and product innovation are the major strategies adopted by the market players to retain their share in the market for fluorescein angiography. In August 2019, Topcon announced the launch of Maestro2Automated OCT/Fundus Camera. This launch is likely to boost the company’s ophthalmic portfolio. In September 2017, Carl Zeiss Meditec launched Clarus 500 ultra-widefield fundus imaging system, which aids in early disease diagnosis and improved patient management. Some of the prominent players in the fluorescein angiography market include:

This report forecasts revenue growth at global, regional, and country levels as well as provides an analysis of the latest industry trends in each of the sub-segments from 2016 to 2027. For the purpose of this study, Grand View Research has segmented the fluorescein angiography market report based on product, technology, application, and region.

How big is the fluorescein angiography market?

What is the fluorescein angiography market growth?

Which segment accounted for the largest fluorescein angiography market share?

b. Digital Segment dominated the fluorescein angiography market with a share of 97.8% in 2019. This is attributable to high-resolution images of retinal structures compared to conventional methods, such as contrast films.

Who are the key players in the fluorescein angiography market?

What are the factors driving the fluorescein angiography market?

b. Key factors that are driving the market growth include increasing prevalence of various eye diseases, growing demand for early diagnosis, and supportive government initiatives.