The global fractional flow reserve market size was valued at USD 549.7 million in 2018. It is anticipated to exhibit a CAGR of 10.4% during the forecast period. There has been an upswing in the cases of cardiovascular diseases such as coronary artery diseases and high blood pressure, which has been a key factor in the growth of the market. According to the American College of Cardiology (ACC) in 2017, about 31.0% of all deaths across the globe were caused by cardiovascular diseases. 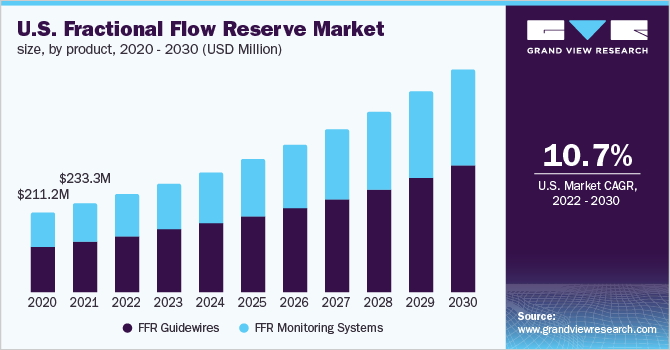 According to the article published by The Society for Cardiovascular Angiography and Interventions (SCAI) in May 2019, FFR provided the valuables insights post angiography and can impact the treatment plans and outcomes in patients with acute coronary syndrome (ACS) stable coronary artery disease (CAD), which reinforces the importance of better patient management, thereby anticipated to increase adoption of the same over the forecast period.

Moreover, market players such as Opsens Medical in 2016, diverted net proceeds earnings towards R&D, marketing, and commercialization of its fractional flow reserve. Thus, increasing R&D investments in developing novel cost-efficient equipment is projected to bode well for the market.

Furthermore, rising geriatric population is poised to keep the demand for fractional flow reserve (FFR) high. Old aged individuals are more prone to cardiovascular diseases and chronic diseases such as diabetes. Type II diabetes can further lead to the development of fatty cells in coronary artery, which can cause blockage, thereby, causing a stroke or heart attack.

The global geriatric population is expected to grow exponentially in the next few years, owing to the late baby boomers in countries such as Japan, China, and Brazil, among others. The population of individuals aged 60 years and above was estimated to be 962 million in 2017 by the United Nations, which is expected to reach 2.1 billion by 2050

Growing incidence of coronary artery diseases and diabetes in the U.S. is working in favor of the overall market. Diabetes cases are on a rise due to unhealthy eating habits of the populace in the country, which is further leading to obesity and associated diseases. For instance, in 2016, according to WHO, there were more than 1.9 billion adults in the U.S. who were obese. In addition, rising adoption of fractional flow system in conjugation with OCT, for patients suffering from cardiovascular diseases, especially in the U.S., is likely to broaden the consumer base in the near future.

FFR guidewires accounted for the dominant share in the market in 2018 owing to their extensive usage in diagnostic cardiovascular procedures. This segment is estimated to register a healthy CAGR over the forecast period owing to rising usage for coronary artery disease diagnosis globally. For instance, in 2015 according to the Centers for Disease Control and Prevention (CDC), about 370,000 individuals died owing to coronary artery disease in the U.S. Additionally, aged people are more prone to cardiac disorders. Therefore, the widening base of geriatrics is benefiting the growth of the segment.

Single-vessel coronary artery disease (CAD) led the fractional flow reserve market in terms of revenue in 2018, owing to the wide application of the device in CAD, coupled with the rise in geriatric population. Moreover, growing partnerships among key players to increase market penetration, for instance, collaboration of GE Healthcare and Medis in 2017, is anticipated to stimulate the growth of the overall market. 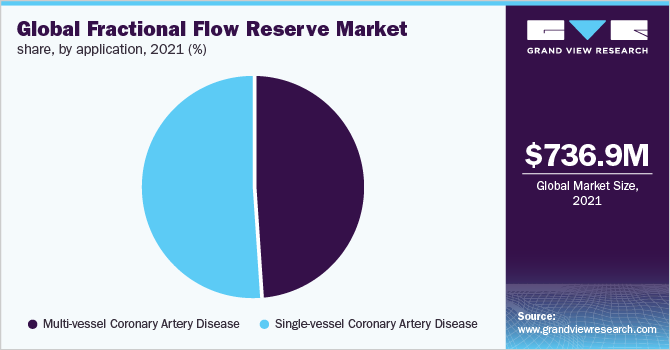 North America accounted for over 40.0% of the overall market revenue in 2018. The dominance of the region can be attributed to favorable government policies for medical device penetration and presence of well-developed healthcare infrastructure. In addition, rising mergers and acquisitions by key players are poised to keep the level of competition high in near future.

The Asia Pacific fractional flow reserve market is expected to witness lucrative growth in the coming years due to an increase in diabetes and cardiovascular diseases cases as well as rising disposable income. Additionally, introduction of favorable laws for medical devices adoption is also estimated to support the growth of the regional market. For instance, in Korea, an agreement was implemented on March 15, 2012. This agreement made medical devices duty free, thereby increasing adoption.

The market is oligopolistic in nature with few providers controlling the majority share and dynamics of the market. The notable market players operational in this market are OPSENS Medical, Abbott Laboratories, Koninklijke Philips N.V., Acist Medical Systems Inc., and Boston Scientific.

On the other hand, players such as Medtronic plc, B. Braun Melsungen, Siemens, and Terumo Medical Corporation could be potential market entrants owing to product launch of allied products used in FFR. For e.g. Siemens Healthineers, launched Sensis Vibe CTx in March 2019, which was capable of generating data needed to do CT based FFR. This move was in anticipation to gain more visibility in the FFR and OCT market scenario.

Furthermore, companies operating in the market are focusing on launching novel products as well as expanding their business outreach. For instance, In March 2019, Abbott received the U.S. FDA approval for Resting Full-cycle Ratio (RFR) intravascular diagnostic test, which is a novel type of FFR physiologic assessment. This test aimed at identifying narrowing of the coronary arteries that determines the need for a stent or not.

This report forecasts revenue growth at global, regional, and country levels and provides an analysis of industry trends in each of the sub-segments from 2018 to 2026. For the purpose of this study, Grand View Research has segmented the global fractional flow reserve market report on the basis of product, application, and region:

How big is the fractional flow reserve market?

What is the fractional flow reserve market growth?

b. North America dominated the fractional flow reserve market with a share of 41.11% in 2019. This is attributable to favorable government policies for medical device penetration and presence of well-developed healthcare infrastructure.

Who are the key players in fractional flow reserve market?

What are the factors driving the fractional flow reserve market?

b. Key factors that are driving the fractional flow reserve market growth include increasing cases of cardiovascular diseases such as coronary artery diseases and high blood pressure, rising geriatric population and prevalence of diabetes.