The global fuel cell vehicle market size was valued at USD 1.14 billion in 2021 and is anticipated to register a CAGR of 49.9% from 2022 to 2030. The surge in population has resulted in rising pollution levels have shifted the trend toward clean fuels and green technology to curb carbon emissions effectively. This had a favorable influence on FCV demand in the recent years. The change from conventional fuel automobiles to environment friendly vehicles has accelerated the demand for FCVs in recent years. Other factors, such as strict environmental laws, the availability of incentives and subsidies for clean fuels, and hazardous gas emissions from combustion engine vehicles, are driving the market growth throughout the forecast period. Furthermore, the increasing awareness regarding vehicle emissions has led manufacturers to design alternate powertrains, increasing the market's development. 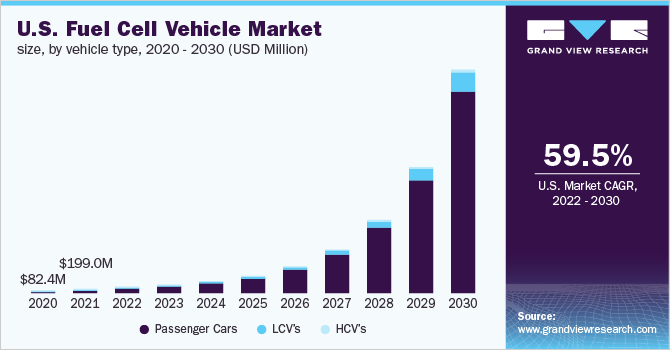 The outbreak of the COVID-19 brought the whole ecosystem to a halt, prohibiting the development and sale of revolutionary automobiles throughout the world. Fuel cell vehicles had to halt until the lockdowns were released before they could continue to grow, which had an impact on their manufacturing operations. As a result, manufacturing volumes for car production had to be adjusted causing late final delivery and a decline in revenue. Furthermore, the automotive industry is known for its heavy investments and requirement of constant funding to stay afloat. During the early months of the pandemic, this resulted in the stoppage of production and decreased demand had an adverse impact on manufacturers of fuel cell vehicles and automotive fuel cell producers. However, as the pandemic subsided, the cash flow for revenue and investment started again. With the financial resources becoming stable, the production of automobiles started gaining pace. This prompted automotive fuel cell producers to resume research, development, and testing operations again positively impacting the market growth.

The fuel cell vehicle market is still in its early development and growth stages. Many technologies are in it testing stage with a few automobiles from Toyota Motor Corporation, Honda Motor Corp., and Hyundai Motor Group running in some specific regions. European manufacturers such as BMW AG and Audi are developing fuel cell vehicles based on their earlier prototypes aimed at launching in the later years. Many other companies are following BMW and Audi's footprints. For instance, Renault manufactured the hydrogen fuel cell-powered SUV prototype. The SUV titled Scenic Vision will be equipped with a 16kW fuel cell which will help expand the cars driving range to 800 kilometers without the need for charging. The battery will be lightweight and the carbon footprint will be reduced by 75% as compared with the traditional electric vehicle model. However, the French carmaker model will not be available before 2030 and 2032. The company will launch its fully electric version by 2024.

Hydrogen fuel cell vehicles are expanding their applications to heavy commercial vehicles to increase efficiency. For instance, a major global player in zero-emission hydrogen fuel cell-based commercial vehicles- Hyzon Motors Inc. announced the development of the hydrogen storage system technology which can decrease the manufacturing cost and weight of the commercial vehicle. The new technology is yet to be patented and has the potential of reducing manufacturing component count by 75%, the weight of the system by 43%, and the system storage cost by 52%. This technology uses lightweight composite material for system metal print which is based on a single rack system capable of storing 5 hydrogen cylinders at once. The development of this onboard storage system technology is a collaboration between the European and U.S. division of Hyzon Motors Inc. These technological developments taking place for reducing cost and carbon emission are attempts to integrate hydrogen fuel cell technology as the main power source for future vehicle production.

Fuel cell vehicle are expensive, and the cost of hydrogen (per kilo) in some places are high thereby restraining the fuel cell vehicle market growth. Furthermore, the number of gasoline stations is restricted or inadequate in regions around the world. The industry's progress is limited by a failing distribution network, fear of electric shock, and flammability owing to the chemical attribute of hydrogen fuel cells, which act as a limitation on the market's growth. The manufacturing cost of hydrogen fuel cell vehicles is higher than the manufacturing cost of conventional vehicles. The production cost coupled with aftermarket services cost significantly increases the total ownership cost as compared to that of a standard vehicle. Aside from that, it faces competition from battery electric vehicles and plug-in hybrid electric vehicles, which are becoming popular and is limiting the market's growth.

The vehicle type segment is divided into passenger cars, LCVs, and HCVs. Passenger cars dominate the market accounting for the highest share of 84.3% in of the overall industry in 2021 and registering the highest CAGR of 50.6 % in the forecast period. The surge in the adoption of passenger cars in countries such as Japan and South Korea drives segment growth in the fuel cell vehicle market. Depleting fossil fuel sources are driving the price of the vehicle fuel. This is prompting the government to look for sustainable and low emission sources to power the vehicles. 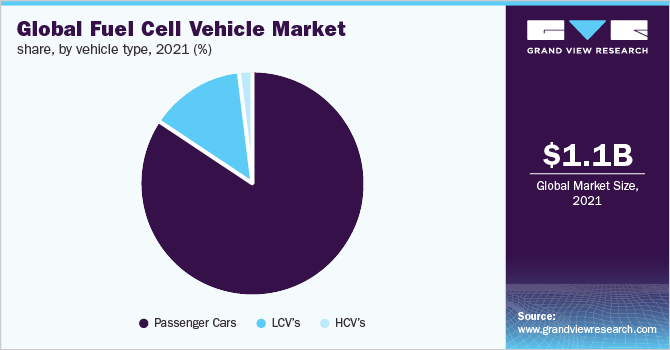 The LCV segment is expected steady growth in the forecast period. Light commercial vehicles are instrumental transportation vehicles used for supply chain purposes. Using a fuel cell in place of a battery provides electrochemical conversion of energy into torque and high efficiency. Thus, the use of fuel cells in long-distance travel vehicles such as LCVs is an ideal choice from the perspective of cost-saving and efficient travel.

Asia Pacific accounted for a revenue share of more than 65% of the overall market in 2021. The growing sales of cars in countries such as South Korea and Japan are the primary factor for the growth of the passenger cars market in this region. Furthermore, Government initiatives in Japan for the usage of fuel cell vehicles and support the consumer through subsidies for the purchase of the vehicles are driving the growth of the market in this region. Government initiatives for the usage of fuel cell vehicles and providing consumer support in the form of vehicle subsidies in Japan are also propelling the market growth in this region. For instance, in November 2021, China's development and reform commission issued a directive to manufacture 5,000 hydrogen fuel cell automobiles by 2025 for port transportation, buses, and intercity logistics. Thus, such booming development in clean energy within the automotive sector is anticipated to drive the fuel cell vehicle market growth over the forecast period.

Following the Asia Pacific, Europe is expected to exhibit the highest CAGR in the forecast period. Major players in the European regions are continuously pushing to integrate fuel cell systems and fuel cells in commercial and passenger vehicles. For instance, in May 2022, the European Daimler group announced plans to include electric vehicles and hydrogen fuel vehicles in their portfolio by 2030. Furthermore, the massive deployment of commercial vehicles in France for public and government usage is fueling the market growth.

The fuel cell vehicle market can be described as a competitive market owing to the increased adoption and investment in the market by private and government players. The market has few established players like Toyota Motor Corporation, Audi AG, and Volvo AB, among others. These companies highly invest in R&D for fuel cell vehicles. Several mergers and acquisitions, partnerships, and collaborations are expected to be some of the growth strategies these companies follow to expand their business by leveraging each other’s expertise. For instance, Plug Power Inc. and Renault Group have announced a joint venture HYVIA, to develop hydrogen fuel cells and low carbon mobility vehicles. Similarly, HORIBA MIRA and Ceres announced a partnership for the development and testing of the fuel cell at the Ceres desk facility in HORIBA MIRA West Midlands site in the U.K. Some of the prominent players operating in the global fuel cell vehicle market are:

This report forecasts revenue growth at global, regional, and country levels and analyzes industry trends in each of the sub-segments from 2018 to 2030. For this study, Grand View Research has segmented the global fuel cell vehicle market report based on vehicle type and region:

How big is the fuel cell vehicle market?

What is the fuel cell vehicle market growth?

Who are the key players in fuel cell vehicle market?

What are the factors driving the fuel cell vehicle market?

b. Key factors that are driving the fuel cell vehicle market growth include increasing concerns over alarming pollution levels and rising emphasis on the adoption of FCEVs due to their pollution-free properties.