The fuel cell vehicle market size was valued at USD 194.5 million in 2017 and is expected to register a 33.7% CAGR over the forecast period. Fuel cell vehicles (FCVs), or fuel cell electric vehicles (FCEVs), have gained much prominence in recent times owing to a surge in usage of conventional fuels and a consequent rise in air pollution. Growing concerns over alarming pollution levels have led to a shift in trend toward clean fuels and green technologies to effectively reduce the carbon footprint. This has positively impacted demand for FCVs over the past few years.

The market is expected to grow at a rapid pace through 2025 with governments all over the world heavily investing in development of fuel cell technology. Such investments have resulted in reduction in the presence of expensive noble metals in a fuel cell, effectively reducing their prices. Increased allocation of funds has also led to establishment of necessary infrastructure, such as hydrogen filling stations. 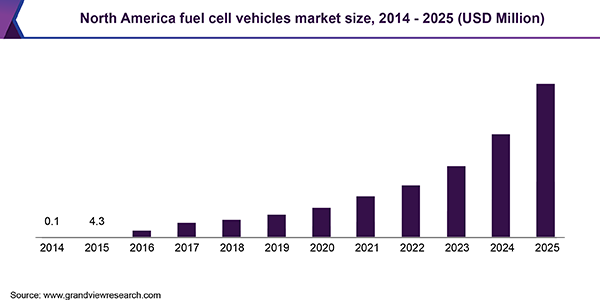 Over the years, the performance of FCVs has matched that of conventional fuel vehicles, in terms of power output and overall experience. Growing emphasis on adoption of FCEVs due to their pollution-free properties, backed by improving infrastructure, is anticipated to benefit the market over the forecast period.

The shift from conventional fuel vehicles toward eco-friendly ones has considerably increased in recent years, thereby fueling demand for FCVs. Strict environment regulations, availability of incentives and subsidies for use of clean fuels, and harmful gas emissions from combustion engine vehicles are other factors expected to drive the market over the forecast period.

However, presence of very few manufacturers has left users with limited product choices. As of 2017, only three vehicles have been commercialized and only in specific regions such as North America, Europe, and Asia Pacific. This could pose as a key challenge.

North America accounted for the dominant share in the market in 2017, which can be attributed to increase in the rate of development of fuel cell infrastructure such as hydrogen filling stations. The market is slated to exhibit a CAGR of over 36.0% over the forecast period to retain its lead position through 2025. Substantial investments by the United States Department of Energy in development of fuel cells to effectively encourage adoption of FCVs is the major factor anticipated to drive demand over the forecast period. Additionally, several states such as New York, California, Connecticut, and Nebraska have launched rebate programs that include incentives for FCEVs.

The fuel cell vehicle market in Europe is anticipated to expand at the highest CAGR of more than 38.0% over the forecast period. This significant growth can be attributed to heavy investment of USD 106 million declared by the European Commission over a period of six years in order to add around 1,200 FCEVs and 20 hydrogen filling stations in the European network. 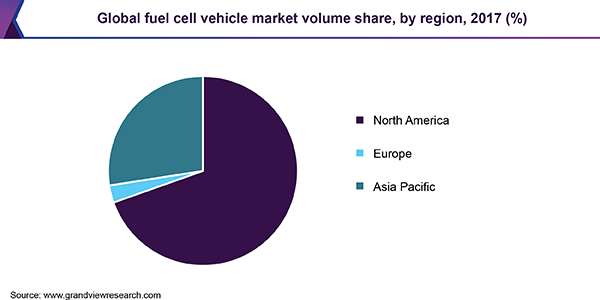 Asia Pacific is also anticipated to grow at a healthy pace over the coming years, registering a CAGR of more than 24.0% over the forecast period. This is primarily attributed to aggressive promotion, and subsequent adoption, of FCEVs in countries such as Japan. The Japanese government intends to increase the adoption of fuel cell vehicles to about 40,000 by the 2020 Tokyo Olympics. Massive investments in countries such as China and South Korea to set up this industry is also anticipated to significantly contribute to the growth of the Asia Pacific market.

However, although the market is consolidated at present, several manufacturers have announced their fuel cell variants to be launched over the next few years. For instance, Audi debuted the Quattro concept FCEV at North American International Auto Show in 2016.

This report forecasts revenue growth at global and regional levels and provides an analysis of latest industry trends in each of the sub-segments from 2014 to 2025. For the purpose of this study, Grand View Research has segmented the global fuel cell vehicle market report on the basis of region: