The global gaming market size was worth 202.64 billion in 2021 and is expected to expand at a compound annual growth rate (CAGR) of 10.2% from 2022 to 2030. Innovation and technological proliferation in both software and hardware are key factors fueling the market growth. Easy availability and access to games on the Internet and the growing implementation of internet services throughout the globe are expected to keep growth prospects upbeat in the forthcoming years. 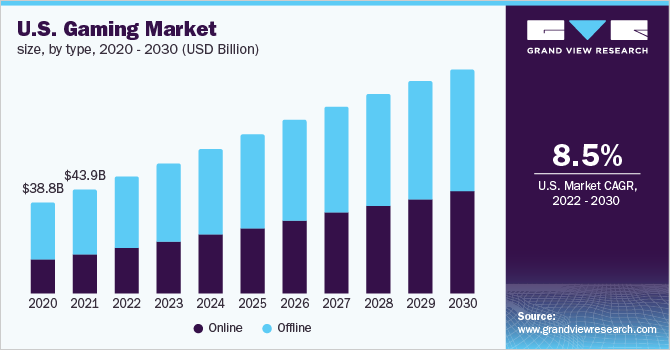 The rising propensity to switch from physical to online games has encouraged industry players to emphasize hardware efficiency and compatibility. The innovation of 5G technology will minimize the current online gaming issues such as gaming lag by offering an improved cloud streaming experience as the 5G latency is substantially lower than 4G.

5G devices provide support to a significant number of devices at a time that will increase the numbers of gamers and will allow developers to deliver an enhanced gaming experience in the online gaming market. Multiplayer games, Free2Play (F2P), and massively multiplayer online (MMO) have continuously grown in popularity, a trend that is projected to extend over the coming years.

An increasing trend of esports, social gaming, cloud-based gaming, and roguelike gaming has a positive impact on growth. The availability of games across devices such as consoles, smartphones, portable gaming devices, computers, and tablets and key market players focusing on launching interactive games attract young generations for entertainment purposes.

For instance, In April 2020, Epic Games, Inc. experienced the participation of 12.3 million users for the in-game Fornite concert of Travis Scott. However, obsessive addiction issues and mental health issues caused by video games coupled with issues linked to fraud while gaming transactions are projected to negatively impact the growth of the market.

The console device experienced growth with around 31.0% of the revenue share in 2021. The console device is expected to register the highest CAGR growth from 2022 to 2030. The advantages such as ease of use, don't require upgrades, allowing multiplier options with console-owning friends, having wireless controllers that give an active experience, and being affordable.

The availability of top gaming consoles such as the Xbox Series X and the PS5 feature ray tracing and are capable of 4K gameplay at up to 120 frames per second, as well as promising super-fast load times, providing an improved experience to the users is projected to fuel the growth for console devices in the forecasted period. 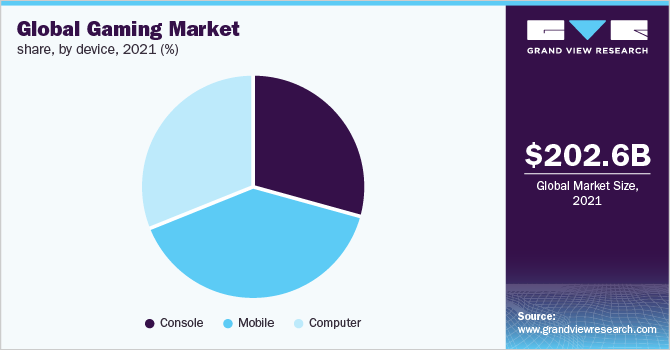 The mobile device segment is anticipated to witness nearly 13.0% CAGR growth in the forecasted period. The increasing popularity of real money-based games and the rising adoption of multiplayer games can be played online from remote places. The factors such as technological developments and growing smartphone penetration across the globe are expected to play a crucial role in the segment's growth.

The online gaming segment is expected to witness a growth of more than 12% by 2030. Technological trends like augmented reality (AR), virtual reality (VR), and mixed reality (MR) have inclined people towards gaming. The growing number of esports events and multiplayer gaming has transformed the online gaming segment. For instance, FIFA 22, launched by Electronic Arts Inc., experienced 9.1 million players, 7.6 million team squads, and 460 matches played by the gamers within the first month of launch.

Additionally, multiplayer modes keep gamers involved through social engagement and a feeling of achievement among players. Players are interested in making in-app purchases and pay only to stay in the game. The trends such as live streaming of games and multiplayer games are expected to fuel the growth of online gaming in the forecasted period.

The Asia Pacific region dominated the global market in 2021 and acquired around 50.0% of the revenue share. The presence of top gaming countries such as China, Japan, South Korea, and India and various Chinese developers are deploying multiple tactics and strategies to attract users and have integrated social media networks into games attributed to the market's growth.

For instance, Tencent Holdings Ltd. has utilized the potential of its social messaging platform WeChat, the application has over 1 billion active users across China, to promote the popularity of games and swiftly connect players to other gamers. The company is headquartered in China and is well known for its organic growth strategies. In February 2022, Tencent Holdings Ltd. acquired 1C Entertainment and acquired the majority of stakes in Inflexion Games as part of the company's growth strategy. 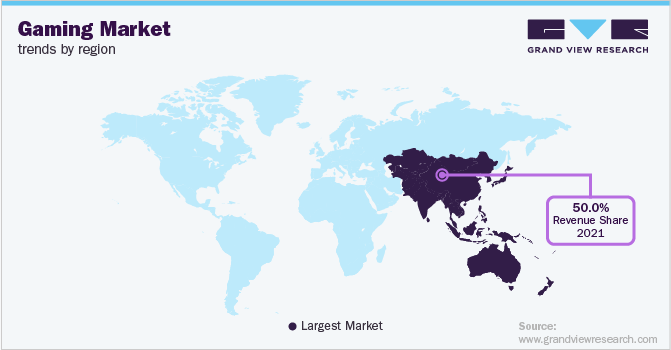 The increasing adoption of esports and other multiplayer games is expected to witness significant growth in the regional gaming industry. The market in South Korea was valued at around USD 7.0 billion in 2021. Tremendously grown multiplayer online gaming and increasing esports events have achieved immense popularity in South Korea.

For instance, Meta Platforms, Inc. has announced a list of VR games during the Meta quest gaming showcase. Games such as Ghostbusters VR, Resident Evil 4, The Walking Dead, NFL Pro Era, Moss: Book II, and many more will be available on the Quest VR platform till next year.

Gaming consoles developed by leading market players including Xbox One by Microsoft Corporation, PlayStation 5 by Sony Corporation, and Nintendo Switch by Nintendo The key players are mostly focusing on delivering product innovation and differentiation to compete in the market. Some of the prominent players in the gaming market are:

This report forecasts revenue growth at global, regional, and country levels and provides an analysis of the latest industry trends in each of the sub-segments from 2018 to 2030. For this study, Grand View Research has segmented the global gaming market report based on device, type, and region: 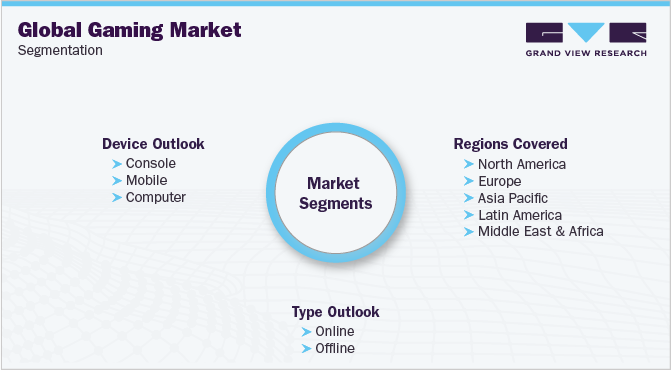 How big is the gaming market?

What is the gaming market growth?

Which segment accounted for the largest gaming market share?

b. By region, Asia Pacific dominated the gaming market with a share of more than 50%in 2021. This is attributable to the rising number of professional gamers in the region.

Who are the key players in the gaming market?

What are the factors driving the gaming market?

b. Key factors that are driving the market growth include the emergence of next-generation video game consoles, the growing number of gamers across the globe, and technological proliferation in the gaming industry.