The global gas pipeline infrastructure market size was valued at USD 2,480.2 billion in 2019 and is expected to grow at a compound annual growth rate (CAGR) of 3.4% from 2020 to 2027. Growing natural gas demand across key industries including power generation, residential and commercial, manufacturing, and the chemical is anticipated to boost the usage of gas pipeline infrastructure over the forecast period. A paradigm shift toward clean energy sources is expected to further support the industry growth. 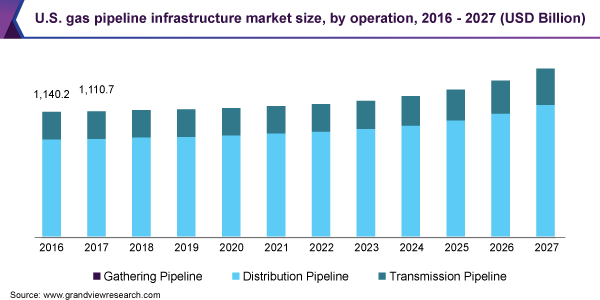 Rising government investments to enhance accessibility along with the need to upgrade the existing pipeline network across several regions are anticipated to augment the industry landscape. According to the BP Statistical Review of World Energy 2019, European nations traded 478.9 billion cubic meters of natural gas through pipeline infrastructure. The growing trade movement will further boost the demand for the additional infrastructure for gas pipelines.

The U.S. accounted for the largest share of the global industry in 2019 owing to the rising government expenditure on infrastructure expansion along with growing exploration and production activities. Significant production from shale gas reserves and new project developments across Permian Basin will further complement the overall regional growth.

In December 2019, Pembina Pipeline Corporation acquired Kinder Morgan Canada Limited and the U.S. portion of the Cochin Pipeline system. The acquisition strategy is expected to enable the company to become a major provider of premium quality condensate across the Chicago area, thereby extending its reach in the U.S. market through a cross-border pipeline.

According to IEA, natural gas production in North America grew at a rate of 9.6% in 2018. The high production growth rate across the region has attracted large industry players and resulted in huge investments made in the natural gas pipeline infrastructure sector. However, the possibility of under-utilized pipeline capacity in a low-carbon future economy is anticipated to hamper the market growth.

Amplified stringency in regulations over clean energy consumption along with additional capacity development of cross-border gas pipelines is expected to boost the growth across various regions. For instance, in January 2020, the Turkstream natural gas pipeline started operation from Russia to Turkey, adding more than 30 BCMA capacity to Turkey and South and Southeast Europe.

The distribution pipeline segment accounted for the largest volume share of 70.5% of the global market in 2019. Rising consumption in end-use segments such as the growing number of gas-fired power plants, the chemical sector, manufacturing sector, and residential and commercial sector is expected to propel the segment growth.

The transmission pipeline segment is expected to witness a CAGR of 3.2% in terms of revenue, over the forecast period. The segment is expected to witness strong growth in countries such as the U.S., Russia, China, and other European nations, with a significant amount of inter-regional trade through imports and exports. However, the slow growth of market liberalization might hinder the segment growth. For instance, National Oil Companies (NOCs) hold transmission pipeline access in China, without access to third-party line rights.

The gathering pipeline is expected to be the fastest-growing segment with a revenue-based CAGR of 3.3%. This growth can be attributed to enhanced natural gas production in 2018 with a 5.2% growth rate as compared to 2017. Higher production leads to higher utilization of gathering pipelines which transport gas away from the point of production to another facility for further refinement or to transmission pipelines.

The Discovery of new reserves across several countries including the U.S., China, Canada, Mexico, Argentina, and Algeria is expected to further propel the gathering pipeline segment growth. However, gas gathering pipeline infrastructure is either developed or acquired pursuant to long-term contracts with gas producers. The contracts running over a period of time cover the majority of the reservoir’s economic life and thereby act as an entry barrier for third parties to operate in the gas pipeline infrastructure market.

The compressor station segment was valued at USD 623.6 billion in 2019, owing to the increasing trend of expanding pipeline capacity and extending new gas sources to tap additional volumes. Compressor stations on transmission pipelines are built every 80 to 150 kilometers along the pipeline length, allowing pressure to be increased in order to keep the gas moving.

Stringent safety regulations regarding transportation along with the introduction of technologically advanced compressor stations are expected to further augment the segment landscape. For instance, the replacement of gas-driven compressors with electric compressors reduces maintenance and fuel costs and helps eliminate site emissions if located near a reliable power source. 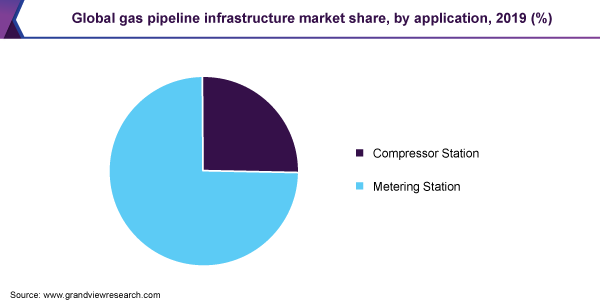 Metering Stations are anticipated to attain higher growth in the application segment, exhibiting a revenue-based CAGR of 3.5% over the forecast period. This growth can be attributed to the strict regulations regarding the accuracy of custody transfer and fiscal metering, which measure natural gas delivery volumes and pressure into and out of the pipeline system. A slight error in accuracy measurement can lead to financial exposure in custody transfer transactions with losses in Billions of dollars.

North America occupied the largest volume share of 54.8% of the total market in 2019. The presence of highly integrated transmission and distribution infrastructure that can transport natural gas to and from any state across the region has attracted leading pipeline companies to operate in North America. The U.S. is the major hub of gas pipeline infrastructure occupying over 80% of the total pipeline length across the region.

Canada is anticipated to attain the highest revenue-based CAGR of 3.9% over the forecast period. Expansion and replacement of existing pipeline infrastructure are among the primary factors responsible for the regional market growth. For instance, in February 2020, Canada’s Federal Court of Appeal cleared the way for the Trans Mountain pipeline expansion, which would increase its capacity from 300,000 bpd to 890,000 bpd adding 600 miles to the pipeline.

Russia holds a dominant position in the market owing to heavy investments made by operators across the region. For instance, Gazprom constructed 146 gas pipelines in 2018 stretching over 2,000 kilometers across the Russian Federation. The company allocated USD 5.71 billion between 2005 and 2018 for gas grid coverage expansion, thus boosting the penetration rate in Russia up to 68.6% in December 2018.

Asia Pacific is expected to witness the fastest growth exhibiting a revenue-based CAGR of 3.7% over the forecast period. China is the third-largest natural gas consumer after the U.S. and Russian Federation. According to the International Energy Agency, the country is anticipated to become the largest importer by 2022 owing to strong investments driven by high regional demand growth and the government’s policy for better air quality.

A high degree of forwarding integration, product penetration in regional application markets, and security of supply from gas fields are among the key factors governing the competitiveness of the industry. The industry participants supply natural gas via different distribution channels such as LNG shipping, local companies, direct supply to industrial/manufacturing facilities, and power plants. In addition, the companies are likely to be benefitted in terms of cost-of-service toll charges that shippers pay to move oil and gas through the pipeline, ensuring a significant rate of return on the pipeline asset. Some of the prominent players in the gas pipeline infrastructure market include:

This report forecasts volume and revenue growth at global, regional, and country levels and provides an analysis of the latest industry trends in each of the sub-segments from 2016 to 2027. For the purpose of this study, Grand View Research has segmented the global gas pipeline infrastructure market report on the basis of operation, application, and region:

How big is the gas pipeline infrastructure market?

What is the gas pipeline infrastructure market growth?

b. Distribution pipeline segment captured a market share of nearly 70.5% in 2019 owing to rising natural gas consumption in end-use segments such as gas fired power plants and chemical sector.

Who are the key players in gas pipeline infrastructure market?

What are the factors driving the gas pipeline infrastructure market?

b. Key factors that are driving the market growth include rising government investments to enhance gas accessibility along with need to upgrade the existing pipeline network across several regions.