Gas Sensor Market Size, Share & Trends Analysis Report By Product, By Type, By Technology, By End Use, By Region, And Segment Forecasts, 2022 - 2030

The global gas sensor market size was valued at USD 2.50 billion in 2021 and is expected to expand at a compound annual growth rate (CAGR) of 8.9% from 2022 to 2030. The major factor driving the market for gas sensors is the development of miniaturization and wireless capabilities, coupled with the improvement in the communication technologies that enable their integration into various devices and machines to detect toxic gases at a safe distance. 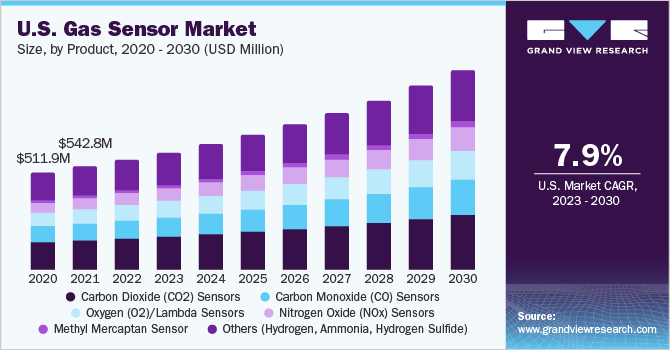 Gas sensors are used to constantly control and monitor gas emissions from various industrial processes, ranging from domestic and industrial. Additionally, the rising demand to control the harmful emissions from critical industries also bodes well for the growth of the market. Advances and innovations in technology are allowing gas sensor manufacturers to develop smart gas sensors. Various companies are also developing drone-based gas leak detection systems to provide better safety for the operators of pipelines across the globe.

For instance, in April 2021, ABB announced the launch of the HoverGuard, a drone-based gas leak detection system. HoverGuard detects, maps, and quantifies leaks up to 100 meters from natural gas distribution and storage facilities, transmission pipelines, gathering lines, and other potential sources safely, quickly, and reliably. Such technological developments bode well for the growth of the market.

Stringent government regulations to reduce car emissions are expected to drive the demand during the forecast period. Rules and regulations are imposed by government bodies across the world on the emission of gas from cars. In April 2020, the Corporate Average Fuel Economy and greenhouse gas emission standards for passenger cars were emended by the National Highway Traffic Safety Administration and the EPA. Thus, the imposed limitation on gas emissions from vehicles creates demand for gas sensors, as it decreases atmospheric pollution and increases fuel efficiency.

Numerous industries such as chemical, oil & gas, and power utilize gas sensors to detect the presence of various combustible and toxic gases. A huge number of gases such as carbon monoxide, carbon dioxide, hydrocarbons, and ammonia are released into the air by these industries. An excess number of emissions of these gases can adversely affect human health.

Moreover, for power generation, methane is being used widely. Methane is a greenhouse gas that is highly inflammable and forms explosives mixes in the air if the methane leaks are not detected properly. Hence new sensor technologies are being developed, such as substance-specific electrochemical sensors and Non-dispersive Infrared (NDIR) sensors that are used to detect methane and other gases in industries.

The outbreak of COVID-19 is expected to create growth opportunities for the gas sensor industry. The COVID-19 pandemic has affected the additional requirement of oxygen for hospitalized patients. This has propelled various hospitals to efficiently manage oxygen use through oxygen sensors. Oxygen sensors are widely used in hospitals to detect oxygen leaks and assist in protecting patients.

For instance, in January 2021, TDK Corporation introduced its TCE-11101, a miniaturized, low-power MEMS gas sensor platform for direct and accurate measurement of carbon dioxide in-home, healthcare, automotive, IoT, and other applications. Such initiatives bode well for the growth of the segment.

The wired segment dominated the market in 2021, accounting for a share of more than 55% of the global revenue. Wired gas sensors offer benefits, such as low maintenance, compact size, low cost, and higher accuracy. In many situations, wired sensors are among the most reliable systems as they directly link the sensor to the device receiving the input, making them suitable for use in mines, oil rigs, and nuclear power plants. Additionally, the increasing adoption of wired gas sensors in residential applications is a significant factor responsible for the segment growth.

The benefits provided by wireless gas sensors, such as high scalability and flexibility, cost-effectiveness, and ease of portability, are expected to drive the growth of the segment. Wireless sensors can be used in a wide range of industries, including petrochemical, manufacturing, and oil & gas. In the oil & gas sector, these sensors provide continuous monitoring of gases remotely and can be operated from the base stations, thus reducing the chances of leakage and explosion of hazardous gases.

The infrared segment is anticipated to register the fastest growth during the forecast period in the gas sensor market. Infrared gas sensors detect various gases, including methane, carbon monoxide, and Volatile Organic Compounds (VOC) such as acetylene, benzene, butane, and others. These gas sensors are also used in monitoring oxygen levels in ventilators and incubators. The growth of the segment can also be attributed to the rising levels of pollution across the globe. 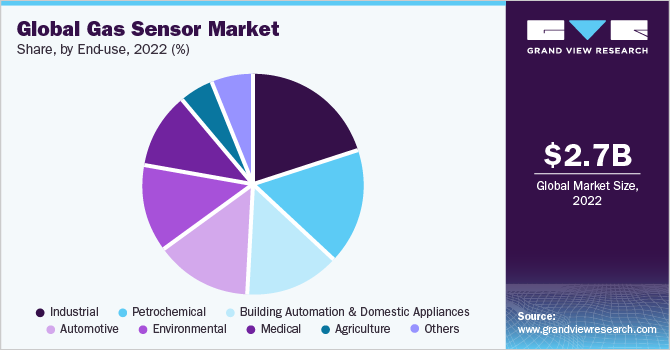 The petrochemicals segment is anticipated to register substantial growth during the forecast period. The LPG and LNG industry verticals have been aggressively deploying gas sensors as these industry verticals require monitoring at every step of storage, production, and transportation of gas. While natural gas production has been growing worldwide, the emphasis on safety and security at the processing facilities has also been equally strengthening. The continued growth in natural gas products is expected to drive the growth of the segment.

Asia Pacific dominated the market in 2021 and accounted for a share of over 32.0% of the global revenue. Increasing awareness about the impact of air pollutants on human health across the countries in the Asia Pacific, such as India and China, is driving the demand for gas sensors for air quality monitoring.

Continued urbanization in the region is also contributing to the rising demand for gas sensors. Moreover, the governments in the Asia Pacific region are investing heavily in smart city projects, thus creating significant potential for smart sensor devices. Such factors bode well for the regional market growth.

Europe is expected to witness steady growth during the forecast period. Stringent norms related to the emissions of gases and the subsequent need for emissions monitoring are expected to drive the regional market's growth. In Europe, the safety requirements require all the vehicle OEMs to include gas sensor technologies in their offers. As rules to curb the pollution levels are becoming more rigorous, the popularity of gas sensors in the automotive sector to decrease pollution is expected to increase in the coming years.

The market is fragmented in nature. Market players are pursuing various strategies such as mergers & acquisitions, new product launches, and strategic partnerships, among others, for expanding their market presence. Market players are also investing aggressively in R&D for enhancing their product offerings. Benefits associated with wireless devices are prompting market players to mainly provide wireless gas sensors.

Vendors are also focusing on expanding their product offerings. For instance, in March 2021, Robert Bosch GmbH’s Bosch Sensortec announced the launch of the BME688 sensor, which combines humidity, gas, temperature, and barometric pressure sensing with Artificial Intelligence (AI). The BME688 detects the presence of many gases, including VOCs, hydrogen, and carbon monoxide, in part per billion (ppb) range. Some of the prominent players in the gas sensor market include:

The report forecasts revenue growth at global, regional, and country levels and provides an analysis of the latest industry trends in each of the sub-segments from 2017 to 2030. For the purpose of this study, Grand View Research has segmented the global gas sensor market report based on product, type, technology, end-use, and region.

How big is the gas sensor market?

What is the gas sensor market growth?

Which segment accounted for the largest gas sensor market share?

b. North America dominated the gas sensor market with a share of 30.6% in 2021. This is attributable to various agencies and legislations promoting the use of gas detection devices at the workplace for the safety of the employees.

Who are the key companies/players in the gas sensor market?

What are the factors driving the gas sensor market growth?

b. Key factors driving the gas sensor market growth include the increased extensive application of gas sensors in process and manufacturing industries for detecting various toxic, including hydrogen sulfide and nitrogen dioxide.