The global gas turbine market size was valued at USD 22.17 billion in 2021 and is projected to expand at a compound annual growth rate (CAGR) of 6.2% from 2022 to 2030. A gas turbine is an engine, which heats a mixture of fuel and outside air at a very high temperature to generate mechanical energy through the spinning of the turbine blades. The mechanical energy further drives a generator, which produces electrical energy. Rapid technological advancements in the energy industry, combined with a shift in focus toward distributed power production technologies, are propelling the worldwide market forward. This market is predicted to expand rapidly during the forecast period, owing to increased government backing for power production technologies that minimize carbon dioxide (CO2) emissions around the world. 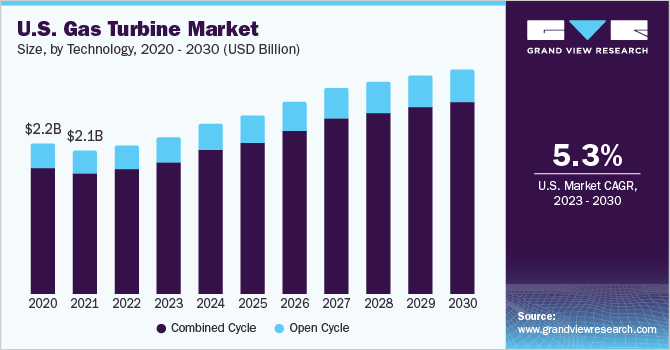 Gas turbines play an important role in reducing greenhouse gas emissions. As compared to other combustion-based electricity generation applications, gas turbines are very proficient and also result in decreasing carbon emissions. The execution of numerous climate change initiatives along with regulations to cut down GHGs emissions are expected to lead to a surge in the potential for gas turbines during the forecast period.

Lockdowns in major cities and economies have caused most industries around the world to shut down, effectively halting production. As a result, demand for oil and gas has decreased over the world. Global natural gas consumption was reported to be 3,822.8 billion cubic meters in 2020, according to the bp statistical analysis of world energy 2021, a decrease of roughly 81.1 billion cubic meters from 2019. Furthermore, as a result of the global pandemic, electricity consumption from industrial and commercial end-users has decreased significantly. As a result, demand for gas turbines decreased during the pandemic.

>200 MW emerged as one of the most significant segments in this market with a revenue share of more than 65.0% in 2021. It is likely to be the fastest-growing segment during the forecast period. The rising power generation operations around the world, as well as the move from coal to gas-based power plants in some of the world’s major countries, are driving demand in this category.

The need for power generation is expanding due to an increase in power generation activities around the world as a result of the rising demand for energy due to population growth and fast urbanization. The rise of the power generation business, combined with a greater emphasis on generating electricity from renewable energy sources, is the primary driver for gas turbines, particularly those with capacities above 200 MW.

The reduced size of the turbine allows for easier maintenance and operation, which is a crucial reason for the 200 MW turbine's success. Because of its smaller size, the product is lighter, making it perfect for offshore locations where the power to weight ratio is a key factor in selecting whether or not to build a turbine unit. The oil and gas industry is expected to restore its impetus in the near future. Because of their compliance with operational and environmental circumstances, small turbines are frequently used in the oil and gas industry.

The combined cycle turbines sector accounted for the largest revenue share of more than 72.0% in 2021 and is anticipated to continue its dominance in the near future. This technology category is expected to increase at a faster rate in the coming years. These turbines use less fuel to produce the same amount of energy and eliminate transmission and distribution losses. Combined cycle turbines are known to be extremely efficient, allowing systems to achieve efficiencies of 60 to 80 percent.

Strict regulations for coal plants, low gas prices, and the integration of increasing amounts of renewable energy are driving the switch to combined cycle gas turbine technology. CCPPs complement solar and wind power by being able to start and stop fast, allowing them to compensate for changes in renewable energy power.

Government initiatives that encourage the use of sustainable fuels for electricity generation and reduce greenhouse gas emissions are likely to boost demand for natural gas-fired power plants over coal-fired power plants. Furthermore, the industry is expected to be propelled by falling gas costs and the finding of shale gas reserves during the forecast period. 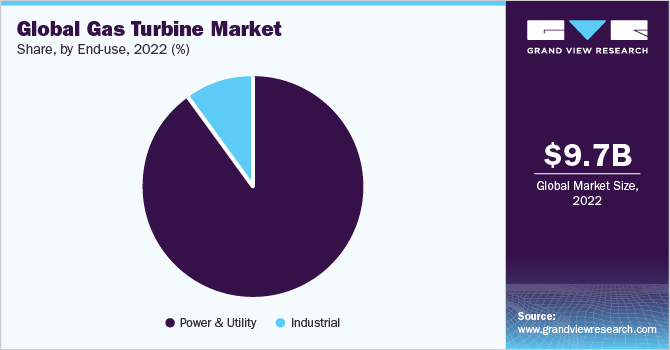 The Asia Pacific emerged as the largest market share of more than 31.0% for the gas turbine market in terms of revenue as of 2021. During the forecast period, the region led by China, Japan, Indonesia, Thailand, and India is expected to grow at the quickest rate. The Asia Pacific region's regional need for electricity is being driven by rapid urbanization and the emergence of a middle class. The presence of growing economies such as India and China, as well as low-cost raw materials and labor, are tempting multinational businesses to expand their operations in this region.

North America led by the U.S, Mexico, and Canada is projected to grow at significant rates during the forecast period. The demand is primarily driven by the shale gas reserve and technological development in extraction and mining technology which are consistently lowering the operational cost of gas extraction in the region. Further, the North American region has witnessed large-scale commissioning of gas-based power.

Oil and gas companies have been able to generate shale gas on a commercial scale because of technological breakthroughs in completion procedures like multistage hydraulic fracturing and drilling techniques like horizontal wellbores. The aforementioned technological breakthroughs, as well as commercial shale gas production, are expected to fuel the regional market in the foreseeable period, according to trends.

Saudi Arabia is a major gas turbine end consumer in the Middle East and Africa region. This has resulted in a large number of gas turbine providers in the country, all of whom are seeking to increase their market share. Gas turbines are supplied by major OEMs such as Siemens Energy, General Electric, and Mitsubishi Power, Ltd. throughout the country.

The market is consolidated by a few major companies, which account for a dominating industry share. Industry participants practice several strategic initiatives, such as joint ventures, mergers & acquisitions, partnerships, and new product offerings, to enhance their foothold in the market. For instance, in June 2020, the consortium between Ansaldo Energia and Shanghai Electric Group signed a contract with the Bangladesh Power Development Board company named North-West Power Generation Company Ltd. The consortium is anticipated to design and build an 880 MW combined cycle power plant in Bangladesh under the terms of the deal, allowing the companies to expand their scale of operation. Some of the prominent players in the gas turbine market include:

This report forecasts revenue and volume growth at global, regional, and country levels and provides an analysis of the latest industry trends in each of the sub-segments from 2019 to 2030. For this study, Grand View Research has segmented the global Gas Turbine market report based on technology, capacity, end-use, and region:

b. Power & Utility was the largest end-use segment in the gas turbine market accounting for 80% of the total value in 2021 owing to the deployment of a number of large-capacity power projects.

Who are the key players in the gas turbine market?

How big is the gas turbine market?

What is the gas turbine market growth?

b. The >200 MW capacity segment led the global gas turbine market in 2021 accounting for the highest revenue share of more than 67%.

b. The combined cycle technology segment dominated the global gas turbine market and accounted for the largest revenue share of over 70% in 2021.

Which region held the largest share in the gas turbine market?

b. Asia Pacific dominated the global gas turbine market and held the largest revenue share of over 30% in 2021.

What are the factors driving the gas turbine market?