The global green hydrogen market size was valued at USD 786.9 million in 2019 and is expected to grow at a compound annual growth rate (CAGR) of 14.24% from 2020 to 2027. Green hydrogen is produced by the electrolysis of water for which electric power is utilized, which is generated by renewable energy sources, such as wind or solar energy. The presence of favorable government policies pushing towards the hydrogen economy along with growing environmental concerns regarding increasing carbon emissions from fossil fuel usage is expected to drive the demand for the hydrogen economy. This trend is anticipated to provide a potential growth landscape for the market over the forecast period. 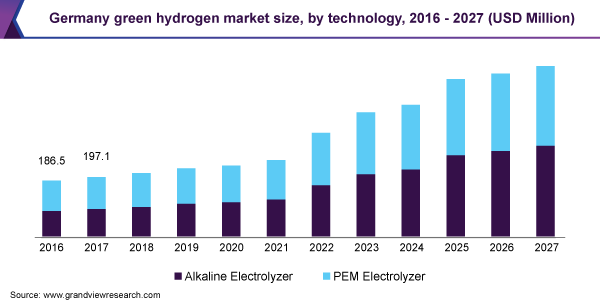 Moreover, the country is expected to lead the market in the forecast period owing to the presence of a large number of projects in the pipeline. For instance, Ampiron and OGE, which are transmission and gas system operators in the country, are working to deploy 100 MW electrolyzer capacity along with a dedicated pipeline for hydrogen transportation in the north-west area of Germany, which is expected to become online in 2023.

Hydrogen produced through renewable-powered electrolysis is used as a fuel in vehicles, or it is stored and used later in fuel cells to generate electricity. Furthermore, some of the major countries, such as Germany, Japan, and the U.S., are looking to adopt hydrogen as transportation fuel over conventional fossil fuels, which would boost the market growth in the forecast period.

However, the high capital cost of the electrolyzer unit is one of the major restraints being faced for large-scale deployment of green hydrogen projects. In addition, the presence of low-cost hydrogen production through conventional techniques, such as steam methane reforming and coal gasification, is expected to hamper the market growth over the forecast period.

Supportive government policies across the globe to increase the production of green hydrogen is expected to augment the market growth. For example, With the introduction of new U.S. EPA Tier II regulations to control the content of sulfur in gasoline from its current maximum level of 350–30 ppm, that is the refinery average, and 80 ppm as per-gallon by 2006, and to further reduce the highway diesel fuel sulfur content from currently being 500 ppmw down to 15 ppmw (per-gallon average) by 2006, petroleum refineries are faced with significant restraints to fulfill the sulfur content levels coupled with the mandatory reduction of aromatic contents. These factors have resulted vendors to look for alternatives to oil in transportation sector which has resulted hydrogen to emerge as the fuel for transportation in future to reduce the growing carbon emissions.

In addition, increased investment in smart, energy-efficient residential, and commercial buildings is expected to drive the adoption of green hydrogen for energy generation. Hydrogen is also an economically viable option for investors to comply with federal and environmental regulations and meet ever-increasing energy demand. 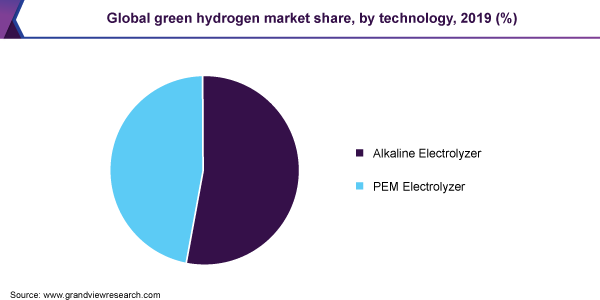 The PEM electrolyzer segment is expected to register the highest growth rate over the forecast period. The presence of solid specialty plastic material-based electrolyte offers higher functional flexibility to the PEM electrolyzer as compared to the alkaline counterpart. Moreover, lower gas permeability and thickness of proton exchange membranes along with high proton conductivity of these electrolyzers will boost the segment growth further.

Industry players are continuously focusing on deploying PEM electrolyzer technology at commercial scales to make the green hydrogen generation process more power-efficient. For instance, in January 2020, a U.K.-based company, ITM Power, announced a joint venture with ITM Linde Electrolysis GmbH. The companies will provide green hydrogen at an industrial scale by utilizing PEM electrolyzer of the capacity of more than 10 MW.

Europe led the global market in 2019 and accounted for the largest revenue share of over 57% owing to huge investments by the European economies, aiming for an energy transition into clean a hydrogen-based economy. For instance, in August 2019, the U.K. government announced a USD 14.8 billion investment plan for a project that is expected to use 4 GW of offshore wind for green hydrogen production by 2030.

Germany is expected to lead the market during the forecast period due to the large number of projects in the pipeline. For example, national transmission and gas network operators Ampyrone and OGE are working to provide 100 MW of electrolytic cell capacity along with a dedicated hydrogen transport pipeline in northwestern Germany, which is expected to go live in 2023.

The market in North America is anticipated to attain a prominent growth rate over the forecast period, with U.S. and Canada leading the region owing to the implementation of clean energy policies. In the U.S., California holds the majority of the market share with the growth driven by aggressive de-carbonization targets, such as phasing out of gas or diesel-powered public buses by 2040.

The North American market for green hydrogen market is driven by significant support from the federal government of the countries. Countries such as the U.S. and Canada provides substantial funds in this regard for pilot scale projects. These funds are likely to aid advancements in research & development for green hydrogen technologies and the development.

In Canada, Air Liquide is building a large-scale PEM electrolyzer with a 20 MW capacity, which will generate green hydrogen using hydropower. Such developments along with projects under pipeline in Canada will significantly aid the market growth in the region.

Asia Pacific is expected to register the highest CAGR over the forecast period, with Australia and Japan being the largest contributors to the regional growth. For instance, Toshiba is constructing a green hydrogen plant with a 10 MW electrolyzer capacity, which would be utilized to provide hydrogen for transportation application.

China has great market growth potential, as increased use of renewable energy increases grid instability. Hybrid systems are becoming more popular in Thailand, boosted by political reforms. Centralized power sources are mixed with intelligent distributed power sources that represent the large market for renewable hydrogen. These factors are expected to drive the growth of the regional green hydrogen market.

In addition, the Australian Government is taking proactive steps to boost the domestic green hydrogen market. For example, Australia opened the Clean Energy Innovation Hub in 2019, inviting investors such as Toyota with advanced fuel cell technology. Siemens is committed to 5 GW of renewable energy development in Western Australia and provides a benchmark for green hydrogen.

Key participants in the industry are focusing on technological advancements and innovation to minimize the cost of renewable-powered electrolysis and largely commercialize the production of green hydrogen. In addition, companies are undertaking several strategic initiatives to expand their foothold in the market.

For instance, in April 2020, Siemens Gas & Power and Uniper SE announced a joint agreement on implementing projects that produce and use green hydrogen from renewable energy sources. Such strategies are expected to enable the commercialization of green hydrogen as an alternative to fossil fuels. Some of the prominent players in the green hydrogen market include:

This report forecasts revenue growth at global, regional, and country levels and provides an analysis of the latest industry trends in each of the sub-segments from 2016 to 2027. For the purpose of this study, Grand View Research has segmented the global green hydrogen market report on the basis of technology and region:

How big is the green hydrogen market?

What is the green hydrogen market growth?

Which segment accounted for the largest green hydrogen market share?

b. Alkaline electrolyzer was the largest segment accounting for 52.86% of the total revenue in 2019 owing to low cost as compared to PEM electrolyzer.

Who are the key players in green hydrogen market?

What are the factors driving the green hydrogen market?

b. Key factors driving the growth of the green hydrogen market include a rise in environmental concerns to curb carbon emissions and to switch to cleaner fuels to attain sustainable development.