The global high voltage cables market size was estimated at USD 35.11 billion in 2019 and is expected to grow at a compound annual growth rate (CAGR) of 3.7% from 2020 to 2027. Growth in offshore wind farms, increasing investments in grid interconnections along with increasing investments in transmission and distribution systems are the major factors driving the market. The high voltage (HV) cables are widely used for the transmission and distribution of electricity from the substations. The augmented investments in smart grids and power transmission & distribution lines are expected to drive from 2020 to 2027. The adoption of smart grids in developed as well as emerging economies fulfills the need for grid interconnections, thus, have resulted in increased investments in underground and submarine cables installations. 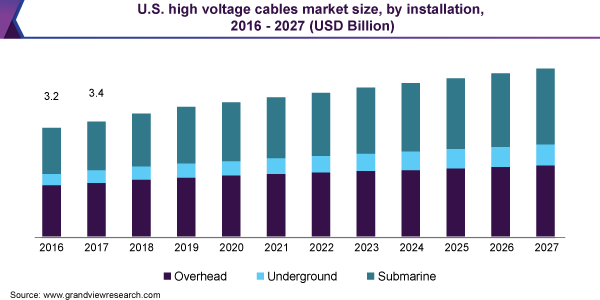 Smart grid is an electric grid, which consists of controls, computers, automation, and new technologies and equipment, which function together and provide efficient transmission of electricity. The rising population is leading to increasing demand for power, need for reducing the frequency and duration of power outages, and restoring service faster after outages, which required smarter and technologically advanced grids. Smart grid helps in providing more reliable power, generating efficient renewable power, using a mix of energy sources, working with smart devices and smart homes, reducing carbon print, and encouraging the use of Electric Vehicles (EVs). Hence, the surge in demand for smart grids is anticipated to boost the demand for HV cables over the forecast period.

The increasing energy demand with a growing population is one of the significant factors responsible for the adoption of smart grid technology and the need for efficient power transmission systems. Regions, such as the Middle East, Asia Pacific, and South America, have noted rising investments in smart grids. The densely populated areas require power grid interconnections, thus, creating a demand for submarine and underground cables. Regions, such as North America and Europe, have started the adoption of underground installation of HV cables as well as submarine installation for inter-region/country communication.

The underground cables reduce the space required and offer reliable transmission of electricity. The efficient power transmission and distribution systems from renewable energy sources and the growth of offshore wind farms are expected to fuel the overall market growth. For instance, the Government of Japan is constructing a floating wind farm, 12 miles away from the sea coast, and is expected to install 140 floating wind turbines by 2020. The market is expected to observe a slight downfall owing to the outbreak of the COVID 19 pandemic.

Currently, the cable installation and replacement in aging infrastructure are on hold; however, are expected to resume to meet the increasing demand due to heavy industrialization and urbanization. Australia has deployed the interconnections of the grid to overcome efficient power transmission. According to Clean Energy Council, over 850,000 km of the distribution grid and 45,000 km of the transmission grid is in operation across Australia, with the eastern and south-eastern states boasting the National Electricity market.

The strength of HV cables and high voltage carrying capacity make them readily available for power transmission as well as communication. The underground installation experiences fewer transmission losses, reduces the maintenance costs, and, thus, quickly absorbs the power loads. They discharge no electric fields; hence, many countries are adopting underground cable installations. The demand from various sectors, such as residential, commercial, telecom, automotive, energy, and power industries, are leading to infrastructure development, which, in turn, is anticipated to drive the product demand.

The energy and power segment accounted for the largest revenue share of over 37% in 2019. Several technological upgrades, such as shifting the old transmission cables to high voltage lines to avoid the transmission losses, are being made in the electricity T&D ecosystem. These changes aim at making the ecosystem stable in contradiction of the alternating nature of renewable sources of energy.

However, the growing renewable power capacity and energy generation have further augmented the need for countries to interrelate their transmission systems. This link-up is expected to balance the power generation and demand through the export and import of electricity. With the increase in renewable energy generation, the electricity trade is expected to increase, resulting in the construction of higher capacity interconnection lines significantly driving the market. 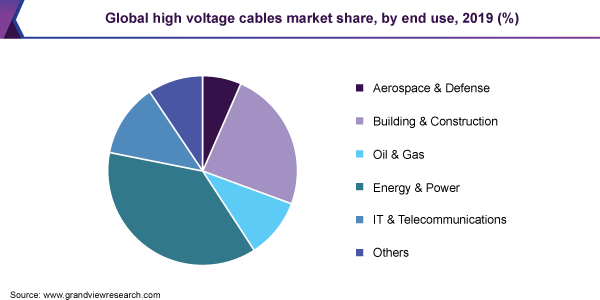 Building and construction segment is expected to grow at the highest compound annual growth rate from 2020 to 2027. New construction and refurbishment in commercial and industrial buildings across different regions is anticipated to fuel market growth. Countries in South America, Middle East and Africa, and Asia Pacific are undertaking new construction activities, such as rail tunneling, rail signaling, and a corresponding expansion in power generation and distribution are driving the market.

Asia Pacific accounted for the largest share of over 39.0% of the overall market in 2019. The region has the highest adoption and deployment of wind farms, among which, China holds the leading position. According to IEEFA, China had 4.6GW1 of operational offshore wind power capacity in 2018. It installed 1.8GW of offshore wind capacity in 2018, which is 40% of the total 4.5GW added globally during the year. In January 2019, China approved 24 offshore wind power projects off the coast of Jiangsu Province with a total capacity of 6.7GW and an investment injection worth USD 18 billion. The projects are expected to be operational by 2020. China’s largest utilities, including China Energy Group, China General Nuclear Power Corp., China Huaneng Group, and the State Power Investment Corp., are backing these offshore wind projects.

The market in MEA is anticipated to register the highest CAGR from 2020 to 2027 owing to the increasing investments in wind farms in the region. For instance, in July 2019, the Middle East Government constructed the largest wind farm in the Al-Jouf region. Fossil fuels are the only source of electricity in the region; however, the country plans to shift from fossil fuels to wind farms for energy generation, thus increasing the demand for HV cables.

The major companies are adopting various organic and inorganic growth strategies, such as mergers & acquisitions and partnerships. For instance, in August 2016, Nexans and American Superconductor Corporation (AMSC) entered into a partnership to market AMSC’s Resilient Electric Grid (REG) system. In June 2016, Nexans also signed a framework agreement with Energinet.dk, a Danish Transmission System Operator (TSO). The agreement, worth more than 20 billion euros, was to deliver 500 km of HV cables.

Extensive investments in smart grid transmission have led players to receive contracts and agreements aggressively. For instance, in 2017, LS Cable & System Ltd. received a contract from Power Grid Company of Bangladesh (PGCB), an overhead cable project worth $60 Billion. LS Cable & System Ltd. will manufacture and supply all the products and construct the transmission towers for the project. Some prominent players in the high voltage cables market include:

This report forecasts revenue growth at global, regional, and country levels and provides an analysis of the latest industry trends in each of the sub-segments from 2016 to 2027. For the purpose of this study, Grand View Research has segmented the global high voltage cables market report on the basis of installation, end-use, and region: