The global hormonal contraceptive market size was valued at USD 16.6 billion in 2021 and is expected to expand at a compound annual growth rate (CAGR) of 4.29% over the forecast period. Increasing awareness in emerging economies regarding hormonal contraception methods, growing investments by the major players for the R&D of novel contraceptive devices, and supportive initiatives by various governments to increase access to contraceptive products are the factors propelling the industry’s growth. Rising awareness regarding the various options available to avoid pregnancy is expected to boost industry growth. 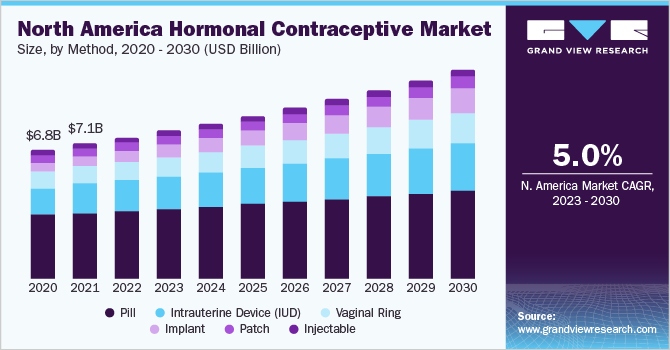 The key companies are collaborating with eminent personalities to make people aware of the contraceptives that aid in avoiding pregnancy. For instance, in July 2019, Allergen Plc partnered with Ashley Tisdale, a musician, and actress, for the awareness campaign “Women Who Know”. The campaign informs women about the various options available for contraception including Loestrin Fe, a hormonal pill by Allergen. Furthermore, the World Health Organization provided guidelines for the use of hormonal contraceptives, such as intrauterine devices, progestogen injectables, and implants, for women at greater risk of HIV.

The guidelines were provided based on the ECHO trial, which didn’t show any differences in the acquisition of HIV in the women using non-hormonal contraceptives, such as copper intrauterine devices, levonorgestrel implants, or DMPA-IM. Moreover, the rising investment in R&D and commercialization of new products are some of the key strategies adopted by the key players to increase their industry share. For instance, in April 2021, Mayne Pharma received U.S. FDA approval for NEXTSTELLIS and estetrol for avoiding pregnancy. It is the only contraceptive with E4, a plant-based estrogen having few potential benefits compared to other estrogens.

Long-acting birth control methods, such as IUDs and vaginal rings, have become more popular in the last decade, and their adoption is on a rise. This can be attributed to the steady increase in copayment for oral contraceptive pills and subsequently, improving affordability. Major IUDs currently available in the U.S. are Kyleena, Mirena, Skyla, and Liletta. Moreover, adopting long-acting reversible devices is one of the major driving factors for industry growth. For instance, according to the study published in the Pharmaceutical Journal, long-acting reversible devices are one of the most successful contraception techniques as it eliminates human error, with failure rates of less than 1% in the 1st year of usage, as it does not require user input regularly.

Based on methods, the global industry has been further segmented into pills, Intrauterine Devices (IUDs), injectables, vaginal rings, implants, and patches. The contraceptive pills segment dominated the global industry in 2021 and accounted for the largest revenue share of more than 45.30% of the overall revenue. The segment growth can be attributed to the simple and easy administration, feasibly available products, increasing & greater awareness about the pills due to early market entry compared to long-acting reversible devices, and higher efficiency of around 99% in timely consumption.

Furthermore, the presence of various major players in the field and growing penetration in emerging countries are expected to contribute to segment growth. For instance, in July 2021, the MHRA approved the OTC sale of contraceptive pills in U.K. pharmacies. Two contraceptive pill brands, Hana and Lovima, are selling desogestrel- synthetic progesterone, OTC with a brief consultation with a pharmacist. The IUDs segment is expected to observe a significant CAGR during the forecast period due to the increasing adoption of long-acting methods of contraception. More than 99.0% effectivity, longer action span, no effect of the device on breastfeeding, and normal fertility after removal of the device are some factors attributing to the segment's growth.

Based on hormones, the global industry has been further bifurcated into combination hormonal contraceptives and progestin-only. The combination of hormonal contraceptives dominated the industry in 2021 and accounted for the largest share of the overall revenue. The segment is estimated to expand further at the second-fastest CAGR maintaining its leading position during the forecast period. The growth of the segment can be attributed to the lower risk of pregnancy as it blocks pregnancy by two different mechanisms leading to higher success rates. Moreover, these contraceptives are associated with a lower risk of developing acne as compared to progestin-only contraceptives. 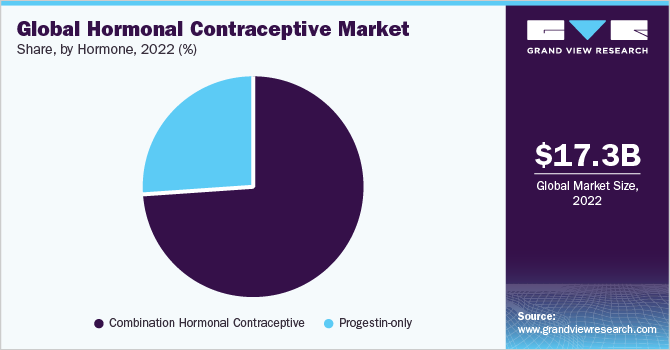 The progestin-only contraceptives segment is expected to witness the fastest growth rate of more than 4.50% during the forecast period. This can be attributed to the no estrogen-related side effects, such as migraines and fluid retention, with the medications. Both these contraceptives are similar in effects and no other contraceptive methods are required when intended within 5 days of menstrual bleeding. According to the Centers for Disease Control & Prevention, out of 100, approximately 9 women become pregnant when these contraceptives are typically used.

North America dominated the global industry in 2021 holding the largest revenue share. It is expected to maintain its leading position growing at the fastest CAGR of more than 5.00% over the forecast period. This can be attributed to the existence of major players, increased sexual health awareness, and a high proportion of unwanted pregnancies. For instance, according to the American College of Obstetricians & Gynecologists, approximately 99% of sexually active women in the U.S. use contraception, and around 88% prefer to use reversible methods of contraception, such as IUDs, implants, vaginal rings, patches, and others. 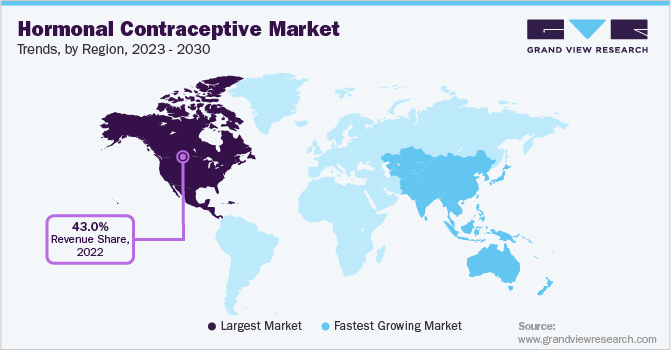 The Asia Pacific region is projected to witness the second-fastest CAGR during the forecast period. A large pool target population, a rise in investment by key players, the introduction of novel contraception devices for females, and a rapidly growing economy are the major factors supplementing regional growth. A rising number of product launches, favorable government reimbursement policies, and increased sexual health awareness are anticipated to foster the Europe regional market. For instance, in May 2021, Pantarhei Bioscience received approval for the oral contraceptive Estelle from the European Commission. Estelle contains E4, a synthetic estrogen, which has been developed by Pantarhei in 2000.

The industry is fragmented due to the presence of several generic drugs. Approval & commercialization of various products, increasing geographical reach, and expanding application scope of already-existing products are the major strategies being adopted by industry participants to enhance their share. For instance, in June 2021, Teva Pharmaceuticals USA launched the generic form 0f NuvaRing, Ethinyl estradiol, and etonogestrel vaginal ring contraceptive. In February 2020, Agile Therapeutics, Inc. received U.S. FDA approval for the Twirla, a transdermal patch containing levonorgestrel and Ethinylestradiol. Some of the prominent players in the global hormonal contraceptive market include:

This report forecasts revenue growth at the global, regional, and country levels and provides an analysis of the latest industry trends in each of the sub-segments from 2017 to 2030. For this study, Grand View Research has segmented the global hormonal contraceptive market report based on hormone, method, and region: 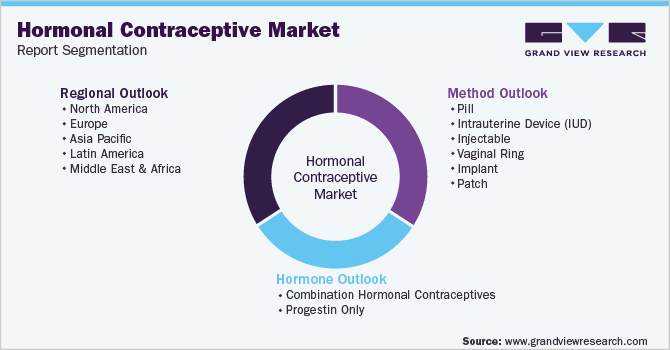 How big is the hormonal contraceptive market?

b. The global hormonal contraceptives market size was estimated at USD 16.6 billion in 2021 and is expected to reach USD 17.3 billion in 2022.

What is the hormonal contraceptive market growth?

Which segment accounted for the largest hormonal contraceptive market share?

b. North America dominated the hormonal contraceptives market with a share of 43.0% in 2021. This is attributable to high per capita income, a strong presence of key market players, higher awareness about sexual health, and a large number of unintended pregnancies.

Who are the key players in the hormonal contraceptive market?

What are the factors driving the hormonal contraceptive market?

b. Key factors that are driving the market growth include rising awareness in emerging economies regarding contraception methods, investments by key players to develop innovative devices, and supportive government initiatives to improve access to products.