The global image-guided & robot-assisted surgical procedures market size to be valued at USD 5.6 billion by 2025 and is expected to grow at a compound annual growth rate (CAGR) of 14.6% during the forecast period. Rapid technological advancements in medical robotics are expected to result in the growing adoption of robots in surgeries. The rising number of complex surgeries and trauma incidence are expected to further drive the market. Rise in spending on medical equipment by hospitals is expected to boost the penetration of image-guided and robot-assisted surgeries in developing economies, such as Asia Pacific and Latin America. An increasing number of complex orthopedic, gynecological, and urological surgeries is expected to fuel their demand over the forecast period. For instance, the introduction of Mako robots, Rosa Spine, Rosa Brain, Mazor X, and Renaissance is expected to boost the number of these medical procedures globally between 2017 and 2025. 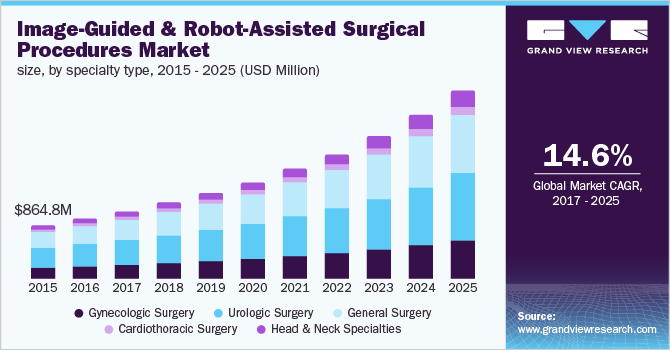 High spending on medical devices and equipment by hospitals is expected to further boost the market for image-guided and robot-assisted surgical procedures. At present, Da Vinci System is used to perform surgeries across a wide range of specialties. Whereas robots such as Rosa spine and Rosa brain are used to perform spinal and neurological operations respectively. This lowers the chances of errors as compared to conventional procedures. A rise in spinal and neurological injuries is expected to further fuel the market expansion over the forecast period.

Developed economies such as North America and Europe currently have higher market share in terms of revenue owing to surging adoption technologically-advanced medical robots and demand for minimally invasive surgeries. Developing economies such as Latin America and Middle East and Africa have a fewer image-guided robots due to a higher cost and lower adoption.

Technological advancements such as three-dimensional (3D) imaging, microscopic cameras, motion sensors, remote navigation, and robotic catheter control systems in image-guided robots and surgical procedures have transformed, and due to this surgical outcomes have improved. The use of surgical robots, which reduce surgery time and errors, is one of the primary factors influencing overall improved health outcomes.

Increasing demand for surgeries across the globe and lack of skilled surgeons acts as a limiting factor for the market. This issue is majorly faced in developing countries where proper equipment is not available and traditional procedure are practiced and has more chances for errors. Acknowledging the new process and techniques for rural and developing countries is the major challenging factor for the market.

These devices play a significant role in saving a patient’s life in cases of surgical requirements, and they are widely used to perform prostate cancer, bladder cancer, and kidney. The regulatory bodies regulate the surgical equipment equipped with AI technologies and comprise various social and ethical issues. It further creates new opportunities for the image-guided & robot-assisted surgical procedures market in the forecast period.

On the basis of specialty, the global image-guided and robot-assisted surgical procedures market was dominated by urologic surgeries. Rising adoption to perform complex prostate cancer, kidney, bladder cancer, and urinary blockage surgeries is expected to bode well for market demand. Robot-assisted gynecological procedures held 18.9% global revenue share in 2016 owing to an increasing number of gynecological interventions such as hysterectomy and sacrocolpopexy.

Prior to the approval of Da Vinci System for gynecological procedures in 2005, invasive procedures were performed for treating gynecological disorders, which led to increased blood loss and longer recovery periods. According to Intuitive Surgical, Inc., from 2005 to 2016; 80% of hysterectomies were performed using minimally invasive techniques. Hysterectomies that involve the use of medical robots are performed with either multi-port or single-site technology. Most of these surgeries are performed using the multi-port technique. 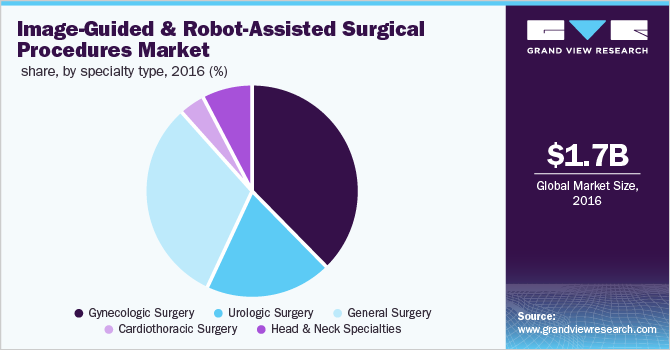 Surgeries such as sleeve gastrectomy and gastric bypass are among the most commonly performed image-guided operations for morbid obesity in the U.S. Based on specialty, general surgeries accounted for the second-largest share of the market in terms of revenue. Surgical subspecialties catered by general surgeon include colorectal, hernia repair, cholecystectomy, and bariatric surgeries. Using surgical robots helps general surgeons to perform error-free operations. This, in turn, is expected to drive the adoption of these devices over the forecast period.

In 2016, North America accounted for the highest market share and is expected to dominate the market with 64.6% share in 2025. High investment, increasing demand, the prevalence of trauma requiring robotic procedures, and the adoption of medical robots for complex interventions are the factors anticipated to boost revenue growth in North America. The U.S. accounted for 58.8% share in the global market mainly due to higher penetration of image-guided robots and surging awareness and adoption of minimally invasive surgeries. 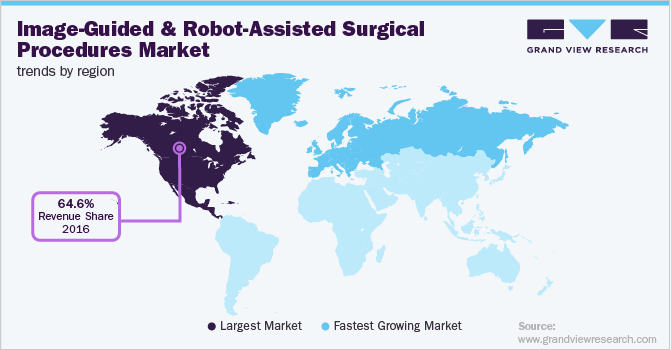 Europe was the second-largest region with 17.4% market share in 2016. Price-sensitive economies such as Latin America and Middle East and Africa have a low adoption rate due to high cost.

Asia Pacific is anticipated to expand at a CAGR of 16.4% over the forecast period owing to factors such as improving healthcare infrastructure in countries like China and India. Japan, on the other hand, has one of the most developed healthcare systems and has wide adoption of automation in each field. This has created a lucrative opportunity for medical robotics manufacturers. These factors are expected to contribute to the regional market demand over the forecast period.

The market is dominated by hospitals. Hospitals are focusing on providing patients with high-quality services and lowering incidents of medical errors. High capital expenditure in hospitals as compared to other healthcare facilities is expected to promote lucrative growth in the years to come.

This report forecasts revenue growth at global, regional, and country levels and provides an analysis of industry trends in each of the sub-segments from 2014 to 2025. For the purpose of this study, Grand View Research has segmented the global image-guided and robot-assisted surgical procedures market report on the basis of specialty type and region: 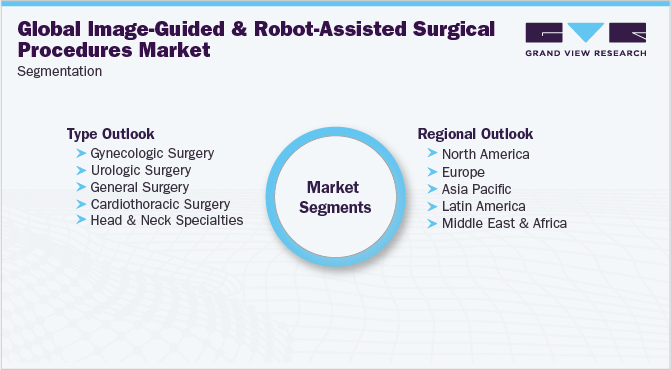