The India malaria diagnostics market size was valued at USD 18.1 million in 2018 and is expected to grow at a compound annual growth rate (CAGR) of5.4% from 2019 to 2026. In India, malaria is primarily caused by Plasmodium vivax and Plasmodium falciparum. P. vivax is mostly found in the plains whereas P. falciparum is predominantly found in peripheral and forest areas of India. Malaria affects all population groups in India and is typically susceptible to pregnant women and children. High disease incidence has been recorded in states such as Chhattisgarh, Odisha, Madhya Pradesh, and Maharashtra. These states witness perennial transmission of malaria owing to inadequate health infrastructure in the hilly and forest areas. Also, there is low awareness regarding the prevention and control of malaria among the various tribal population, facilitating an increase in disease prevalence.

The rise in the incidence of malaria is one of the major factors expected to fuel market growth. According to the World Malaria Report published by WHO, 15 countries in Sub-Saharan Africa as well as India contributed to over 80% of the global malaria burden. India is the only exception wherein cases of urban malaria are observed to date. Similarly, almost 80% of malarial deaths were reported in 17 countries in the Sub-Saharan region and India. Therefore, the growing prevalence of malaria is expected to increase the demand for malaria diagnostic solutions during the forecast period.

Increasing demand for diagnostic tools in India is anticipated to propel the market growth during the forecast period. Malaria during pregnancy can affect in more than one way, causing low birth weight, stillbirths, and congenital infection. According to the Centers for Disease Control and Prevention (CDC), pregnant women are three times more susceptible to malarial infections. Rapid diagnosis and subsequent treatment plans are thus vital in the management of malaria. As RDTs facilitate easy and rapid diagnosis, they have been used extensively in the management of malaria in India. Launch of novel diagnostic products such as Becton, Dickinson, and Co.’s SightDX platform facilitates rapid diagnosis and easy sample preparation. Thus, a rising number of malarial infections are generating the demand for easy and rapid diagnostic techniques for this disease.

Rise in technological advancements to provide efficient diagnosis is one of the major factors accelerating market growth. Increasing demand for high-quality and cost-efficient diagnostic methods are likely to trigger advancements in the industry. For instance, in 2016, Becton, Dickinson & Company announced the introduction of Parasight Malaria Detection Platform for hospitals and pathology labs in India. This platform is a computer vision platform that automatically analyzes the sample and also provides results in four minutes. This platform also uses innovative software algorithms, quicker sample preparation, and specialized optics. These advancements are likely to improve access to malaria diagnostics, especially in remote areas, wherein there is a lack of skilled professionals for testing.

Rising investments by government bodies, market players, and other private investors to curb disease prevalence is one of the major factors driving the market. According to data from WHO, in 2017, approximately USD 3.1 billion was invested in the elimination of malaria by private international investors and government authorities of malaria-endemic nations. Estimates from the same source also indicate that over USD 300 million was invested in the South East Asia region, wherein India carries the largest disease burden. Thus, an increase in initiatives by the government to reduce the incidence of malaria is anticipated to fuel market growth.

The microscopy method is also expected to grow owing to the rise in the use of microscopy techniques for the diagnosis of the disease. This technique is one of the most reliable and traditional methods used for disease diagnosis. Malarial parasites such as P. malaria, P. vivax, P. falciparum, and P. ovale can be identified using this technique. Also, parasite density can be quantified to design treatment plans accordingly.

Rapid diagnostic tests are another method that is used for the detection of specific malaria antigens from the blood sample. This test makes use of a test card, wherein the blood sample is applied along with specific reagents. The appearance of specific bands in the test card, within 15 to 20 minutes, indicates the presence of infection with either of the human malarial parasites. These RDTs are capable of detecting P. falciparum, P. malariae, P. ovale, and P. vivax species of human malaria. Malarial RDTs are typically used where microscopy examination is not feasible, especially in remote areas with limited access to healthcare infrastructure and high-quality microscopy services.

Based on end-use, the market is segmented into hospitals and clinics, diagnostic laboratories, blood banks, and academic and research institutes. The hospitals and clinics segment accounted for the largest market share in 2018 as the majority of the population relies on these long-term facilities for diagnosis, treatment, and management of diseases. In urban India, the easy availability of diagnostic devices, awareness, and experienced healthcare professionals facilitates the easy and effective treatment of malaria. In these areas, malaria is generally prevalent during and post monsoons between July and October. In urban areas, the disease outbreak is highly prevalent due to prolonged rainfall and climatic changes that facilitate the easy growth of Anopheles mosquitoes. Most of the urban regions in India seek treatment in privatized healthcare settings as they are well equipped with advanced diagnostic techniques and provide timely treatment. Thus, the hospitals and clinics segment is anticipated to witness significant growth during the forecast period. 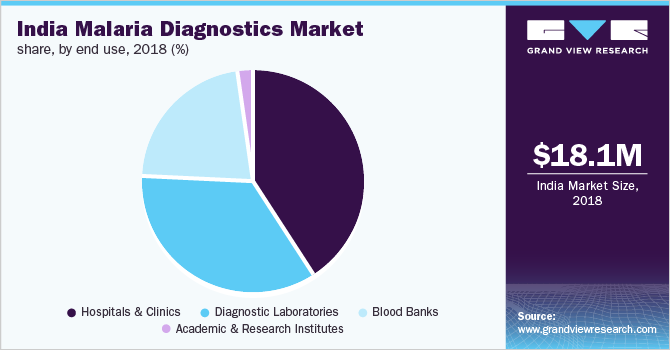 The blood bank segment is expected to witness steady growth during the forecast period. For infectious diseases such as malaria, influenza, and dengue, typically, blood donors are inquired regarding recent visits to endemic regions. In most cases, rapid diagnostic tests are used as primary screening tests, and serological tests are done post confirmatory results. Blood samples from the donor are analyzed and other disease illnesses are determined before blood transfusions. A rise in the number of surgical procedures has been reported in India, which can be attributed to the increase in the incidence of severe chronic diseases and accidents. This has created a significant demand for blood donations in the nation, facilitating increased demand for malarial diagnostic devices.

Rise in strategic collaborations by market players is expected to fuel the market growth during the forecast period. For instance, in February 2018, Siemens Healthineers India partnered with an Indian startup Jana Care to introduce a smartphone-based diagnostic platform called Aina. This diagnostic platform can be used in smartphones and it helps in reading paper strips of all kinds, enabling affordable and accurate testing in any healthcare setting. Some of the prominent players in the India malaria diagnostics market include:

This report forecasts revenue growth at the country level and provides an analysis of the latest industry trends in each of the sub-segments from 2015 to 2026. For this study, Grand View Research has segmented the India malaria diagnostics market report based on technology and end use:

How big is the india malaria diagnostics market?

What is the india malaria diagnostics market growth?

b. RDTs dominated the India malaria diagnostics market with a share of 53.7% in 2019. This is attributable to microscopy examination not being feasible, especially in remote areas with limited access to healthcare infrastructure and high-quality microscopy services.

Who are the key players in india malaria diagnostics market?

What are the factors driving the india malaria diagnostics market?

b. Key factors that are driving the market growth include the rise in the incidence of malaria, increasing demand for diagnostic tools in India, and technological advancements.