The global Isothermal Nucleic Acid Amplification Technology market size was valued at USD 1.6 billion in 2016. Increasing demand for INAAT as a molecular testing technique and the rising prevalence of infectious diseases is expected to drive the market over the forecast period.

According to NCBI, there are over 9.5 million deaths due to infectious diseases every year, of which the majority occur in developing nations. Respiratory viral infections, diarrhea, and pneumonia are some of the leading causes of mortality, mostly in infants. The rise in the aging population across the globe and the increase in the adoption of INAAT over other molecular diagnostic techniques are few key factors driving the market. Furthermore, increasing demand for user-friendly, rapid, and disease-specific kits is also anticipated to boost the adoption of this technology.

INAAT is widely used in the U.S., primarily for diagnosis of infectious diseases such as HIV-AIDS, H. influenzae, S. pneumonia (respiratory tract infections), N. gonorrhoeae, C. trachomatis (genital infections), and TB. According to the CDC, over 2.8 million new cases of chlamydia occur in the U.S. each year and more than 2% of the young population already suffers from the infection.

Continuous improvements in existing amplification products along with the introduction of new technologies such as Strand Displacement Amplification (SDA), Single Primer Isothermal Amplification (SPIA), & Recombinase Polymerase Amplification (RPA), and changing regulatory scenarios for the same are expected to boost the market. The SMART2 technique is one of the major technological advancements from 2010 to 2013. There is an increase in the number of strategic partnerships between companies that manufacture kits and manufacturers of isothermal NAAT diagnostics for the development of novel techniques, and this is likely to boost the growth of this segment.

INAAT is used in recombinant DNA technologies and molecular biology for identifying and detecting nucleic acids. Growing demand for INAAT as a molecular testing technique, increasing prevalence of infectious diseases, and aging population coupled with upsurge in demand for effective and low-cost diagnostics procedures are anticipated to drive the market growth. Estimates published by the WHO in June 2019 suggest that the population in the age group 65 years and above is expected to grow from 7% in 2000 to 16% in 2050. The number of individuals aged 80 years or older is projected to triple by 2020 and 2050 to reach 426 million.

The novel Isothermal Nucleic Acid Amplification Technology is the evolving molecular diagnostic method that links the gap between traditional diagnostic methods and the innovative polymerase chain PCR-based methods. These techniques are time-bound with accurate testing and do not require any infrastructural changes as in the case of polymerase chain reaction facilities. Moreover, due to the high cost of PCR, the technique has perceived limited adoption in emerging countries, where the demand for this technology was enormously high, especially for clinical applications. This elevated demand has led to the advancement of innovative techniques, such as INAAT. Isothermal Amplification methods could become more widespread than polymerase chain reactions in coming years, due to their low energy necessity and ease which allows for their probable integration into the simple, compacted system. In the future, Nucleic acid detection technology is projected to move towards the progress of miniaturization, digitalization, field use, simplification, and automation.

Nucleic Acid Amplification Technique (NAT) technology is broadly used for the detection of infectious disease pathogens, due to its advantages of high specificity and sensitivity. Thus, Nucleic acid detection is vital in the control of infectious disease outbreaks. The constant development in INAAT for detecting COVID-19 signifies one of the key factors certainly influencing the market growth. The COVID-19 pandemic has observed isothermal methods being implemented as the foundational technology used for the detection of SARS-CoV-2 RNA in the home and clinical testing market. Two instances of colorimetric Loop-mediated isothermal amplification in COVID-19 diagnostics can be observed in the NEB’s internal CLIA-certified onsite testing program using saliva and Color Genomics SARS-CoV-2 Diagnostic Assay. Furthermore, in March 2020, Abbott announced that the U.S. FDA issued an Emergency Use Authorization for the ID NOW COVID-19. It is an instrument-based, isothermal, rapid system for the qualitative finding of infectious diseases. Its exclusive INAAT provides results in a few minutes, permitting clinicians to make clinical decisions based on evidence during a patient visit.

The most critical factor restraining the market growth is the regulatory framework required for the approval process for INAAT. Regulatory bodies such as the U.S.FDA, EMEA in Europe, the National Agency of Medicine and Health Product Safety (ANSM) in France, and the Pharmaceuticals and Medical Devices Agency (PMDA) in Japan provide the protocols to monitor the safety regulations at INAAT production facilities.

The low level of awareness and uncertain scenario about the regulations for INAAT diagnostic products creates confusion among manufacturers regarding commercialization. Additionally, the shortage of a robust reimbursement framework in mature markets such as the U.S. is expected to restrain market growth by limiting the purchasing power of buyers. The manufacturing process is complex and requires adherence to safety and handling regulations.

The products segment comprises of instruments and reagents. The reagents segment held the largest share in 2016 owing to extensive usage in hospitals and primary healthcare settings, and are also expected to witness substantial growth over the forecast period.

Consumables and reagents are used more extensively as compared to instruments and witness regular demand owing to increasing R&D. However, the instruments segment is expected to grow at a significant rate due to the introduction of devices that are advanced in terms of accuracy, speed, and portability.

Some of the technologies in the market include SPIA, SDA, Nucleic Acid Sequence Based Amplification (NASBA), Helicase-Dependent Amplification (HDA), Loop-Mediated Isothermal Amplification (LAMP), and Transcription-Mediated Amplification (TMA). Global demand for INAAT has increased due to rising awareness among customers. TMA was the largest revenue-generating technology segment in the diagnostic market in 2016, as it is the first INAAT introduced in the market. It was developed by Hologic (Gen probe).

The increasing population suffering from cancer and infectious diseases has boosted demand for low-cost diagnostics such as INAAT. Other amplification technologies such as Polymerase Chain Reaction (PCR) are not able to fulfill the need for low-cost diagnosis. Novel technologies, which include LAMP and HDA, are anticipated to exhibit steady growth over the forecast period. Non-PCR technologies such as INAAT are gaining significance due to customization features offered by them. 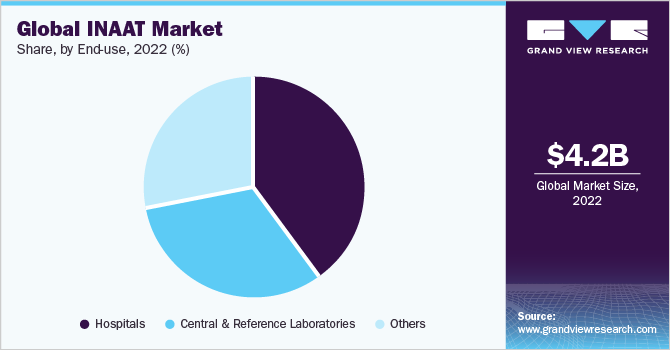 Isothermal amplification is mostly used for the detection of infectious diseases. This, along with the introduction of more specific kits, increasing incidence of diseases such as HIV, hepatitis A & B, & STDs that include chlamydia and gonorrhea are key factors expected to drive the isothermal nucleic acid amplification technology market. Moreover, the increasing need for rapid testing for the detection of infectious diseases to prevent them from spreading, especially in low-income countries, is expected to propel growth.

Blood screening is also an important application segment owing to the increasing number of blood transfusions across the globe. INAAT is widely used for screening of transfused blood for infectious organisms to limit their dissemination and prevent epidemics. Several companies have been undertaking extensive R&D for the usage of INAAT in the detection of cancer-specific molecular biomarkers and the development of drugs specific to these biomarkers.

Hospitals dominated the segment with the largest market share in 2016. Development of wireless communication and miniaturized point of care INAAT instruments aids hospital-based analysis by providing single-level access to diagnostic results throughout the hospital. Automation, a large number of samples for the detection of infectious diseases, and demand for accurate results are factors expected to boost dominance.

As per the end-user analysis, the reference labs segment is expected to exhibit growth due to an increasing number of reference laboratories and high adoption of novel & accurate molecular diagnostic techniques. Various public funding bodies such as CDC, NIH, as well as private investors, such as Wellcome Trust and Bill & Melinda Gates Foundation, encourage the development of advanced technologies for rapid analysis of specific infectious diseases.

North America dominated the regional segment for the INAAT market with the highest revenue in 2021. Economies in the region, including the U.S. and Canada, have exhibited high growth owing to established research infrastructure and rising research initiatives. Growth in the isothermal diagnostics market can be attributed to growing demand and investments from foreign players, which has augmented competitive rivalry.

Per capita expenditure on healthcare in Canada is one of the highest in the world. As a result of the economic development, spending on healthcare has almost doubled over the last few years. According to a study published by the U.S. Department of Commerce, in 2021 health spending in Canada is anticipated to reach USD 308 billion. It is estimated that health spending will signify 12.7% of Canada’s GDP.

Germany has one of the strongest healthcare systems in terms of advanced infrastructure. The region holds the largest market share for INAAT among the European countries. According to the UN population data, one in every 20 Germans is aged above 80 and the number is expected to increase to six by 2050. The increasing geriatric population is responsible for the rising incidence of age-related disorders, such as neurological disorders, diabetes, and cardiovascular disorders. Thus, the need for management of these diseases further creates the scope of development of effective INAAT devices.

Customized products and applications are expected to boost competitiveness. Players are likely to undertake mergers & acquisitions to diversify their product portfolios and gain market share.

This report forecasts revenue growth at global, regional & country levels and provides an analysis of the industry trends in each of the sub-segments from 2014 to 2025. For the purpose of this study, Grand View Research has segmented the global Isothermal Nucleic Acid Amplification Technology market on the basis of product, technology, application, end-use, and region: