The Latin America magnesium nitrate market size was estimated at USD 78.3 million in 2018 and is expected to grow at a CAGR of 4.5% over the forecast period. The significant growth in demand for fertilizer in the farming sector and increasing use of explosives in mining industries is expected to drive the demand. 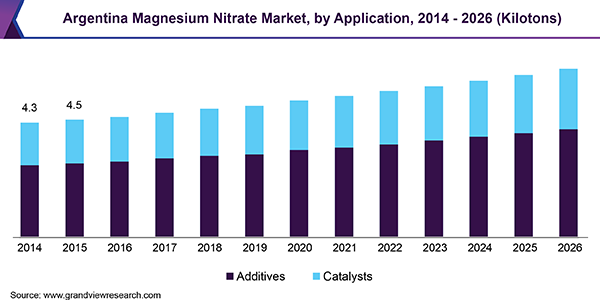 Magnesium nitrate is an odorless, crystalline, and colorless substance, which is primarily used as a catalyst for manufacturing fireworks and petrochemicals. It can be typically prepared by mixing calcium nitrate with magnesium sulfate, which is thereafter filtered to extract the insoluble calcium sulfate. In the explosives industry, it is used as an oxidizing agent to enhance the combustion of other substances used for producing explosives. In the fertilizers industry, magnesium nitrate acts as a source of magnesium ion and the nitrate ion, which stimulate the healthy growth of crops.

Argentina has been one of the crucial markets for explosives due to the growing mining activities in the country. Several companies have been broadening their presence in the country to captivate the untapped potential. Despite the country’s depressed prices of commodities, it is regarded as a mining destination with a multitude of new mining projects in the pipeline.

Latin America is considered as one of the prominent regions in terms of the production and export of crops. The region has witnessed robust growth in the production of crops over the last decade and this trend is expected to continue in the future. Magnesium nitrate is used in the formulation of various fertilizers, as it compensates for the deficiency of the nutrient in a plant. In addition, it contains nitrogen in the form of nitrate, which is the most efficient source of nitrogen for plant growth and yield.

The mining industry in Latin America has been thriving since the past few years and a plethora of metals such as copper, potash, lithium, iron ore, gold, and niobium have been unearthed. With a robust growth opportunity, several companies have made significant investments. In 2017, 305 companies invested a total amount of USD 2.38 billion in exploration activities, particularly in Mexico, Peru, Colombia, and Chile. 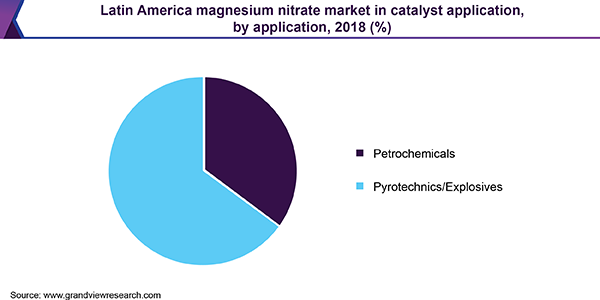 The utilization of magnesium nitrate as a catalyst is growing rapidly in the petrochemicals and explosives industry. It is majorly used as a viscosity adjuster in the petrochemical industry. The favorable properties coupled with reduced risk of hazards associated with the product is anticipated to fuel its demand over the coming years. However, stringent government laws and regulations related to the use of explosives is likely to restrict product demand in the mining sector.

Mexico emerged as the largest consumer of magnesium nitrate whereas Chile is observed to be the fastest-growing consumer with a CAGR of 4.6% during the forecast period. Rapidly growing mining activities have boosted the overall demand for mining explosives in the country.

Mexico has been reforming their grounds of the energy sector which has reflected a substantial impact on the fertilizers industry. According to the International Association of Fertilizer Industry, companies operational in fertilizer business in the country are facing high cost of manufacturing provided the old infrastructure facilities and age-old technology in extracting raw materials. This has ultimately led to lower country-level production and high dependency on imports. With the advancement in the energy sector, the natural gas industry shall witness investment from regional and foreign multinationals, thereby leading to the introduction of the latest technologies. These advancements are likely to lower production and distribution cost of natural gas, eventually leading to decreased cost of fertilizer production.

Chile is a growing market in terms of explosives industry due to high mining activities supported by the government. Chile and Peru are among the two foreign investment open markets concerning mining operations that are aided by the government to subsequently increase the economic conditions of these countries. Companies such as Enaex which are among the top mining and blasting industries since the past 98 years have been observed to expand their business operations in Chile, which in turn shall pave way for magnesium nitrate demand over the forecast period.

This report forecasts revenue growth at a regional & country level and provides an analysis of the industry trends in each of the sub-segments from 2014 to 2026. For the purpose of this study, Grand View Research, Inc. has segmented the report on the basis of application and country:

How big is the latin america magnesium nitrate market?

What is the latin america magnesium nitrate market growth?

b. Additives application dominated the Latin America magnesium nitrate market with a share of 61.7% in 2019. This is attributable to utilization of the product in formulation of nitric acid, fertilizers, and specialty chemicals.

Who are the key players in latin america magnesium nitrate market?

What are the factors driving the latin america magnesium nitrate market?

b. Key factors that are driving the market growth include significant growth in demand for fertilizer in the farming sector and increasing use of explosives in mining industry.