The global liquefied natural gas market size was valued at USD 109.48 billion in 2021 and is expected to expand at a compound annual growth rate (CAGR) of 8.1% from 2022 to 2030. The growing demand for electric power through clean energy sources is likely to propel market growth over the coming years. A growing focus on projects related to distributed power & utility is anticipated to bolster the market growth over the next eight years. The projected growth in natural gas in the power generation business is also likely to create more demand for liquefied natural gas (LNG) across various countries. Coal is the major source of generating electricity worldwide; however, considering the degradation of coal reserves and its adverse environmental impact, there has been a rise in the use of natural gas and other renewable sources of energy for the production of electricity. 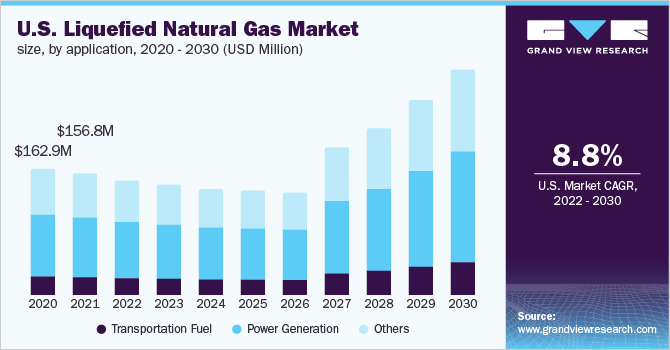 The country has a diverse energy mix, wherein natural gas accounts for the largest share in North America of 23.20% in terms of primary energy production in the country. Policymakers are focusing on developing sustainable energy generation sources, which, in turn, is anticipated to increase the demand for LNG in the country. The demand for natural gas for power generation and transportation fuel is witnessing a growth in the country owing to the presence of a well-established gas infrastructure coupled with the growing oil & gas industry and augmenting industrial activities.

According to Energy Information Administration, natural gas surpassed coal as the most common source of electricity generation in the U.S. in 2016. This would continue in the forecast period and would lead to enhancement in gas power plants with the expected rise in power demand in the country which would further boost the demand for LNG during the forecast period.

Owing to the benefits associated with LNG coupled with the upsurge in the production of rich natural gas in the Northern American region and others have directed sharp attention towards natural gas to be used as a green transportation fuel. Diesel and petrol have been the default options for vehicle fuels. However, there has been a shift from traditional fuel to available better choices on the market such as natural gas that give the same performance in terms of power, acceleration, and cruising speed, but with added financial and environmental benefits. LNG is typically less expensive than diesel giving lower running costs over medium to long distances and the lowest total cost of ownership compared to conventional fuels. It also has strong environmental benefits that improve air quality by reducing greenhouse gas emissions. 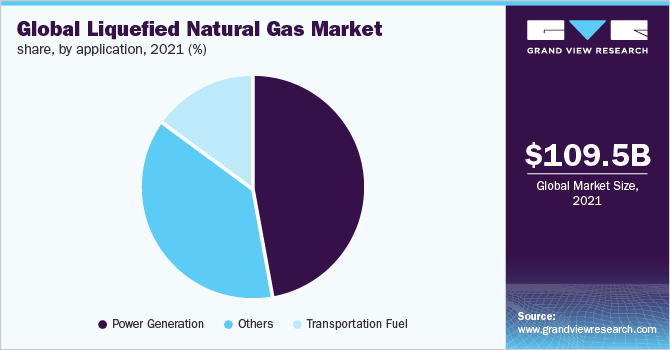 Others application includes natural gas used in the mining industry, chemical industry, food processing, and other industries. For mines operating in remote areas which do not have access to grid-connect electricity, in many such cases, natural gas-powered generators provide peak and baseload generation for electricity and heat. High-tonnage wheel loaders and haul trucks are also powered by natural gas. Using natural gas as a feedstock over diesel helps reduce CO2 emissions by up to 35% for such fuels, owing to which there is increasing demand for natural gas in mining applications.

The Asia Pacific region accounted for the largest revenue share of 80.11% in 2021. Japan accounted for the largest country-level demand and is projected to register a significant growth rate during the forecast period. China is projected to register the highest growth rate in the Asia Pacific in the coming years. Energy mix gas accounts for only 4%–5% of prime energy consumption across the country, letting ample space for development. Robust economic growth across the country is also leading to higher consumption of gas-based power facilities with an enhanced application scope for the market.

Mexico accounted for the highest demand followed by the U.S. in the North America region and is projected to register the highest growth rate with a market share of 71.01% during the forecast period. U.S. has the presence of shale gas reserves and increasing government focus on developing clean energy sources in the U.S. energy mix is driving the high demand for LNG. Canada has shale gas reserves located in Alberta, British Columbia, Manitoba, Saskatchewan, Ontario, New Brunswick, Quebec, and Nova Scotia along with several other territories. Conventional power generation fossil fuel is expected to lose its market share to natural gas-based power generation owing to the presence of agencies such as the Environmental Protection Agency (EPA), which enforces stringent regulations in North America and focuses on the reduction of greenhouse gas emissions.

In terms of revenue, Europe accounted for the second-largest share of 16.75% in the global LNG market in 2021. The rising population is a major factor significantly impacting the power generation market in the region. Growth in population and GDP is expected to drive the power generation demand through clean energy sources which are expected to drive the market for LNG in the region.

The market is characterized by the presence of several key players and a few media and small-scale regional players. Many of the companies have their sector that they focus on and have a very high penetration in that sector. In February 2020, ExxonMobil India LNG Limited has signed a Letter of Cooperation with Indian Oil Corporation Limited and Chart Industries, Inc. to establish a system of transportation infrastructure to expand gas access in India. Virtual pipeline systems deliver liquefied natural gas by road, rail, and waterways to areas not connected by physical pipelines. Some of the prominent players operating in the global liquefied natural gas market are:

This report forecasts revenue growth at global, regional, and country levels and provides an analysis of the latest industry trends in each of the sub-segments from 2019 to 2030. For this study, Grand View Research has segmented the global liquefied natural gas market report based on application and region:

b. Asia Pacific LNG market conquered the global demand accounting for the majority of the revenue share in 2021 and is projected to be the fastest-growing market, owing to the rising demand for LNG economies such as China and India for the various end-use industries.

b. The global LNG market is expected to register substantial growth owing to the rapid growth of electric power through clean energy sources and increasing focus on projects related to distributed power & utility.