The global LPG market size was valued at USD 116.41 billion in 2019 and is expected to grow at a compound annual growth rate (CAGR) of 4.4% from 2020 to 2027. Growing awareness regarding benefits related to the usage of liquefied petroleum gas (LPG) as an alternative to the fossil fuels and rise in the adoption level of clean and green energy sources across both developed and developing countries are some of the factors likely to boost the market growth. Additionally, technological aspects, coupled with the growing number of initiatives taken by the government to educate the rural people to substitute LPG with the traditional cooking fuels, such as kerosene, wood, and coal, are likely to play a vital role in the growth of the market. However, the growing population and an increase in demand for liquefied petroleum gas as vehicle emission gas are likely to boost the growth of the market. 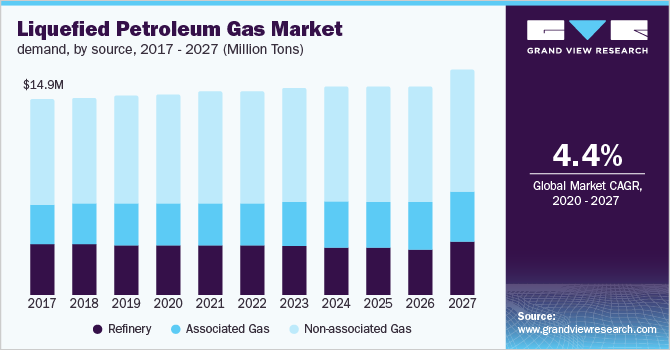 In Asia Pacific, liquefied petroleum gas demand from associated gas was 18.92 million tons in 2019. Non-associated sources accounted for a noteworthy revenue share and are projected to witness significant growth over the projected period. The United States shale gas boom has occurred as a major drift, resulting in excess in the global liquefied petroleum gas (LPG) market. The market has also witnessed substantial field developments in oil and gas wells, coupled with growing on-site processing facilities, mainly in Russia, China, the U.S., and Canada.

The commercial and residential application segment accounted for a substantial share in the LPG (liquefied petroleum gas) market in 2019. Promising government subsidies and initiatives to endorse the product as the major substitute for conventional fuels, such as wood and coal, have been the key factors contributing to the segment growth. Liquefied petroleum gas is also replacing chlorofluorocarbon and hydrofluorocarbon as a refrigerant owing to a nominal contribution towards depletion in the ozone layer. This has led to amplified application opportunities in the commercial/residential segment in ventilating and heating applications in addition to the cooking uses. The sector is likely to witness significant growth over the upcoming years to influence a net global industry worth exceeding USD 6.81 million by 2027. 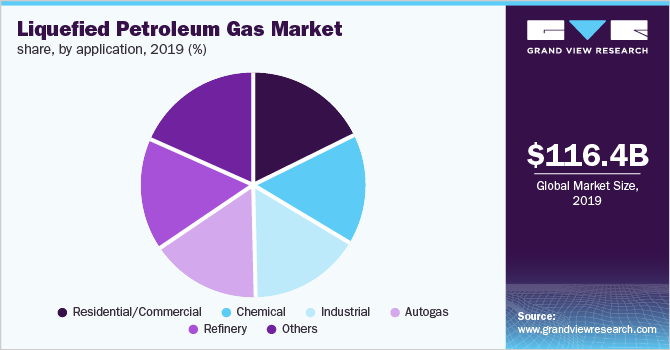 Europe held the largest volume share of 78.5% in 2019. In Europe, LPG demand in residential/commercial applications is expected to witness significant growth from 2020 to 2027. Numerous summit meetings such as COP21 are taken into consideration by many countries to decrease carbon emission in the atmosphere. For instance, India is taking up initiatives to use other cooking fuels for cooking purposes.

The global LPG industry has been characterized by high competition owing to the presence of major manufacturers and distributors, along with numerous multinational corporations. The global market is likely to attract a large number of regional players over the estimated period. The majority of the market players have been focusing on expanding their autogas capabilities owing to the rapidly growing fleet count, mostly in Europe and the Asia Pacific. Some of the other initiatives undertaken by the players are long-term partnerships with auto-OEMs and distributors for supportable supply over the next few years. Some of the prominent players in the LPG market include:

This report forecasts volume and revenue growth at global, regional, and country levels and provides an analysis of the latest industry trends and opportunities in each of the sub-segments from 2016 to 2027. For the purpose of this study, Grand View Research has segmented the global LPG market report on the basis of source, application, and region: