The global liquid crystal polymer films and laminates market size was estimated at USD 147.6 million in 2021 and is projected to augment at a CAGR of 7.1% from 2022 to 2030. The market growth is primarily driven by the increasing use of LCP films & laminates as an alternative to polyimide films in various application industries. This trend is anticipated to continue in the forecast period. Liquid crystal polymer (LCP) belongs to the family of thermoplastics, having a unique set of properties. It is a super engineering plastic, which is tolerant under harsh environments. It has high heat, electrical, and chemical resistance. LCPs are anisotropic in nature (in both solid and liquid crystal phases), which means strength, stiffness, and thermal expansion will be greater in one direction but not the same in every direction. Also, LCP is ideal for flexible printed circuits (FPCs), antenna substrates, and housings because of its low moisture absorption and strong dielectric performance. 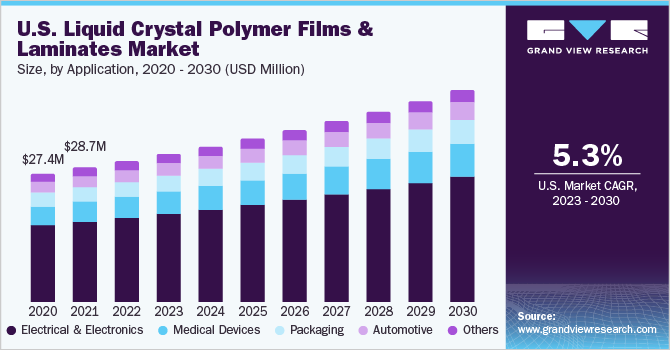 The U.S. presents a large market for electronics & automotive alike, with significant scope for growth in the medical devices market. The country is home to several large automakers such as General Motors, Ford, Chrysler, Toyota, Nissan, Hyundai-Kia, and BMW. In terms of revenue, the market was valued at USD 31.2 million in 2021 and is projected to expand at a CAGR of 5.8% in the forecast period.

The need for sophisticated yet safe technology is driving innovation in the electronics industry. The semiconductor industry specifically remains a strong point in the U.S. economy, with companies such as Intel, TI, and Micron are investing in new fabrication facilities in the U.S. while continuing to make lower-tech, low-cost products, and packaging/test offshore. Growing demand for flexible and high-performance circuit boards is, thus, expected to augment the demand for LCP films & laminates in the electronics industry.

However, limitation in the melting process is anticipated to hinder the market growth in the forecast period. The melt viscosity of LCP resins is much lower than other competitive thermoplastic resins. Other physical limitations include high anisotropy of the product’s properties, poor knit line strength, and the requirement of stoving or drying before melt processing.

The films segment dominated the global with a high revenue share of more than 67% in 2021. The manufacturing process for films and laminates differs according to the type and grade of the end product. However, most films are processed via roll calendaring or extrusion, which helps manufacture the best products with optimum thickness and gauge. Laminates are formed by direct lamination of LCP resins onto copper foils, either with or without the application of adhesives. LCP films dominated the LCP films & laminates and are projected to progress at a CAGR of 6.7% over the forecast period.

LCP films segment is expected to witness considerable growth over the forecast period on account of its inherent properties such as low coefficient of thermal expansion (CTE), reduced moisture absorption, high tensile strength, and abrasion resistance. These properties result in enhanced performance of these films, thus, making them suitable for diverse applications in the above-mentioned end-use industries.

The electrical & electronics segment emerged as the largest application segment in 2021 and accounted for more than 63.2% share of the overall revenue. Remarkable developments in the field of wireless communication and technology have paved the way for the use of LCP films in diverse and new applications. Foreign investors are investing heavily in modernizing the communication infrastructure, which, in turn, is propelling the demand for communication equipment. 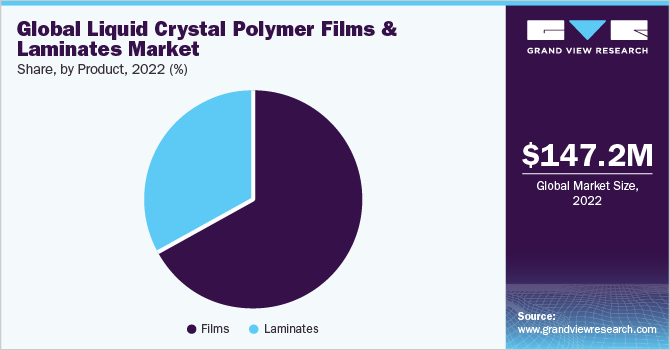 LCP films are used in the packaging industry due to their robust mechanical and chemical properties. They are slowly replacing polyamide films in the packaging industry. In cavity packing, LCP films have grown as an alternative to generally used metal and ceramic materials. Liquid crystal polymer films have the best properties among the polymeric material and are used in the cavity packing of sensors and microelectromechanical (MEM) devices.

The Asia Pacific accounted for the largest revenue share of more than 50.2% in 2021. Growth in the Asia Pacific region will be driven by rapid urbanization and growing industrialization in countries such as China, India, Vietnam, Thailand, Singapore, and Taiwan. China is one of the largest smartphone users and manufacturers in the world due to which it achieved significant market share in this region. Transitioning lifestyles coupled with changing preferences for advancing telecommunication technologies and IT infrastructure are expected to drive the demand for LCP films & laminates.

North America emerged as the second-largest liquid crystal polymer (LCP) films & laminates market in 2021. Growing consumer demand for miniaturized electronics is expected to drive the demand for LCP films & laminates in the electrical & electronics industry in North America. Expanding automotive sector, particularly in Mexico, is anticipated to positively impact the demand over the forecast period.

Manufacturers such as Sumitomo Chemicals and Kuraray Co., Ltd, are integrated along the value chain from raw material processing to final production and distribution as well. These companies have the added competitive advantage of lower procurement costs and highly efficient distribution and logistics. Some of the key companies in the global liquid crystal polymer (LCP) films & laminates market are:

This report forecasts revenue and volume growth at global, regional & country levels and provides an analysis of the industry trends in each of the sub-segments from 2019 to 2030. For the purpose of this study, Grand View Research has segmented the global liquid crystal polymer films & laminates market report based on product, application, and region:

Halted manufacturing activities across various end-use industries has led to weakened demand for specialty polymers. The prevailing macroenvironment due to the pandemic shall register indications of recovery depending on the course of COVID-19's prevalence and subsequent resuming of manufacturing activities. The report will account for COVID-19 as a key market contributor.