The global LPG tanker market size was valued at USD 182.02 million in 2021 and is expected to expand at a compound annual growth rate (CAGR) of 5.3% from 2022 to 2030. Strong growth in shale gas production is likely to propel the market growth over the coming years. Crude oil price volatility coupled with developments in hydraulic fracturing and horizontal drilling methods resulted in major companies shifting their attention towards the production of oil and gas from shale rock. Change in focus toward the production of shale gas is further projected to enhance market growth over the estimated period. The growing trade relationships between the U.S. and the APAC region for shale gas owing to the reduced cost of transportation is likely to outgrow the demand for liquified petroleum gas (LPG) tankers over the forecast period. 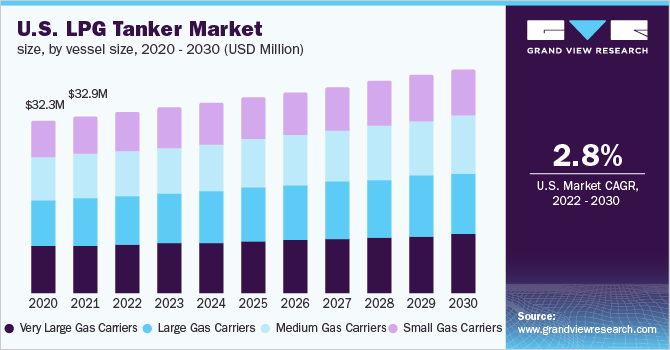 However, several vessels are already on the order book and will complete their LPG transportation to mentioned locations. Companies operating in the country are renovating their existing fleets. They are continuously launching LPG carriers based on the latest technologies to sustain the challenging environment. For instance, in December 2021, NYK announced the development of its first two dual-fuel free VLGC tankers from Kawasaki Heavy Industries. They are expected to be delivered by 2024. These vessels will be equipped with separate cargo tanks designed to carry LPG and ammonia simultaneously to flexibly respond to various trade patterns.

On the basis of vessel sizes, the global liquified petroleum gas tanker market has been further divided into Very Large Gas Carriers (VLGC), Large Gas Carriers (LGC), Medium Gas Carriers (MGC), and Small Gas Carriers (SGC). The VLGC segment led the market and accounted for 29.03% of the global revenue share in 2021. Very large gas carriers are widely used for the transportation of LPG gas for longer distances across various countries. Growing liquefied petroleum gas trade relationships between countries, such as the Middle East and Asian countries, Western Africa and Europe, and the United States, is the major factor boosting the segment growth. However, the LGC is anticipated to take over the forecast period by a small margin. Large gas carriers also have a significant share in the global market.

Some of the key trends observed in the market include innovation in LGC development, which is expected to boost market growth. For instance, in June 2021, Belgium-based shipping group, Exmar, delivered its newly-built largest dual-fuel LPG carrier Flanders Innovation with an 88,000 cbm capacity. The LPG carrier has a deadweight tonnage of 55,100 tons with a length of 230 m and a width of 36.6 m. The vessel dual-fuel technology is expected to reduce CO2 emissions by about 38% compared to the IMO reference lines. Growing extraction and production of shale gas with exporting domestic liquefied petroleum gas is the main factor expected to propel the growth of the LGC and MGC segments. The demand for SGC is projected to observe considerable growth over the coming years owing to the growing LPG demand from residential segments.

The full pressurized segment led the market and accounted for the largest revenue share of more than 32.5% in 2021. The full pressurized segment will maintain its lead throughout the forecast period. The market is anticipated to have a steady growth in all segments as the amount of LPG transported increases. Fully-refrigerated types are VLGCs that are capable of transporting 15,000 m3 to 85,000 m3 of gas and are suitable for long distances. Vessels used in such ships are proficient in bearing a minimum working temperature of –50ooC and a maximum working pressure of around 0.28 kg/cm2. Carriers for ethylene are observed as a discrete segment in the industry since they need extra refrigeration for safe transportation across the world. 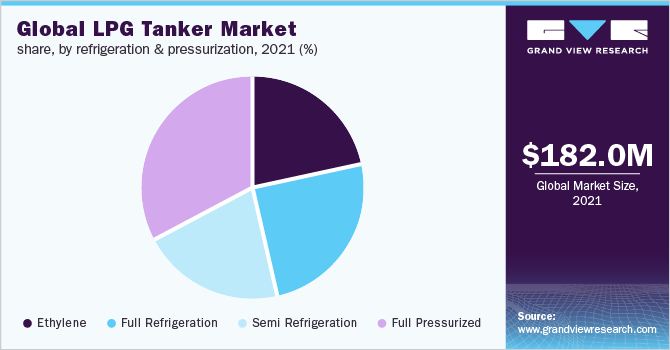 The semi refrigerated segment is expected to grow at a steady CAGR over the forecast period. These vessels are similar to full-pressure vessels as they have a Type C tank. In this case, the pressure vessel is usually rated for a maximum working pressure of 57 bars. The size of the ship is up to 7,500 m3 and is mainly used for transporting liquid gas. Decompression can reduce the thickness of the tank compared to a fully pressurized container, but at the expense of additional freezing systems and tank insulation. The tanks of these ships are made of steel that can withstand temperatures of up to 10 °C and can be cylindrical, conical, or spherical. A small ship carrier is generally the full-pressure type. The semi-refrigerated techniques are used for the shipment spaces around 7,500m3.

Europe dominated the global liquified petroleum gas tanker market in 2021 and accounted for the largest revenue share of over 29.30%. Russia led the Europe regional market in 2021, in terms of revenue. The market in Europe is primarily driven by a rise in the demand for LPG due to government initiatives and low domestic production for LPG, which leads to higher demand for LPG tankers to facilitate import. North America, the Middle East, and Western Africa are the key regional markets for LPG tankers on account of the growing exports of liquefied petroleum gas to regions, such as Europe and the Asia Pacific. North America is one of the top exporters of LPG in the world after Qatar and Australia. The presence of abundant proven reserves of shale gas in the region drives the market.

According to the Observatory of Economic Complexity (OEC), North America accounted for a share of 15.0% of the global LPG exports valued at USD 40 billion in 2021. Moreover, the demand for LPG in the U.S., Canada, and Mexico is expected to increase owing to its application as cooking fuel. LPG is also used in these countries in heating applications in residential buildings during winters. In terms of revenue, Asia Pacific accounted for the second-largest share in 2021. The market in this region is led by China, Japan, and India. More than 70% of the LPG tankers in the world are manufactured in the Asia Pacific region, specifically in South Korea and Japan. The countries in the Asia Pacific region are largely developing countries that are undergoing rapid industrialization.

The market is characterized by the presence of several key players and a few mid-sized and small-scale regional players. Many of the companies have their own sector that they focus on and have a very high penetration in that sector. For instance, Stealth Gas Inc. has the largest fleet of small gas carriers in the world and they dominate the Mediterranean Sea region. They own and operate 44 small gas carriers. Dorian LPG has one of the largest VLGC fleets and operates mostly out of the U.S. The LPG tankers are almost entirely made by the companies in South Korea and Japan with more than 80% of ships being made in this region. Some of the prominent players operating in the global LPG tanker market are:

This report forecasts revenue growth at global, regional, and country levels and provides an analysis of the latest industry trends in each of the sub-segments from 2019 to 2030. For the purpose of this study, Grand View Research has segmented the global LPG tanker market report based on vessel size, refrigeration & pressurization, and region:

How big is the LPG tanker market?

What is the LPG tanker market growth?

Which segment accounted for the largest LPG tanker market share?

Who are the key players in the LPG tanker market?

What are the factors driving the LPG tanker market?

b. Growing trade relations and increasing shale gas extraction are some of the prominent factors which are expected to drive the growth of the LPG Tanker Market.