The global mammalian polyclonal IgG antibody market size was valued at USD 816.5 million in 2017 and is anticipated to witness a CAGR of 5.1% during the forecast period. Advantages over other forms of antibodies, increasing R&D investments, and rising adoption of novel diagnostic procedures are major factors boosting the market growth. 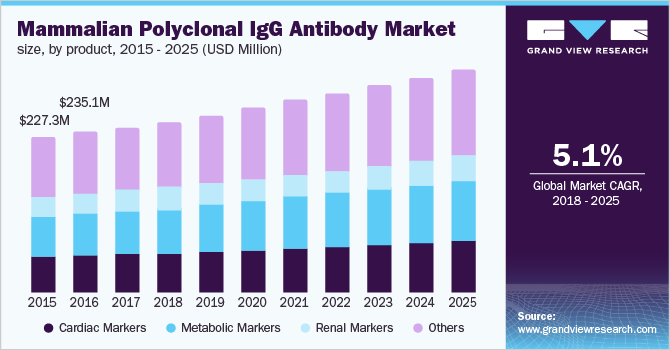 Polyclonal antibodies are often the most preferred choice in routine laboratory tests, such as ELISA, microarray assays, western blotting, flow cytometry, and immunohistochemistry. Production of these antibodies does not require skilled professionals and large batches can be produced as per client requirements.

The rise in investments by biotechnology and pharmaceutical companies has led to technological advancements in the process of antibody production. These advancements have increased the product demand, thereby augmenting the mammalian polyclonal IgG antibody market. In recent years, biopharma companies have been willing to invest in the development of new and efficient antibodies for QC purposes.

For instance, R&D investments by the top 10 biotech companies increased from USD 8.2 billion in 2010 to USD 10.2 billion in 2016, accounting for a 13% increase. Mammalian polyclonal IgG antibodies are being increasingly used in the diagnosis of chronic diseases, such as cancer, diabetes, autoimmune diseases, and metabolic diseases.

The rising use of biomarkers for accurate and rapid diagnosis is further boosting the global market. CD20 biomarkers for diagnosis of B-cell lymphoma and leukemia are being increasingly used by clinicians, leading to an increase in demand for these products.

Based on product type, the mammalian IgG polyclonal antibody market is segmented into cardiac, metabolic, renal, and other biomarkers. The rising prevalence of Cardiovascular Diseases (CVDs) due to unhealthy eating habits, sedentary lifestyles, and lack of physical activity is driving the cardiac biomarkers segment. Metabolic biomarkers are used for testing a wide range of diseases. The segment is thus projected to expand at the highest CAGR of 5.5% during the forecast period.

The increasing use of metabolic biomarkers for the diagnosis of diabetes is anticipated to propel its growth. The estimates from the International Diabetes Federation indicate that over 425 million people were suffering from diabetes globally in 2017. Type II diabetes is the most common type of diabetes and 90% of the affected population suffers from this type. Globally increasing cases of cancer are also anticipated to fuel the segment growth in the near future. Other biomarkers taken into the consideration in the study are cancer, and autoimmune biomarkers.

Based on animal hosts, the market is segmented into goat, rabbit, horse, mouse, and others. The mouse segment is anticipated to exhibit the highest CAGR owing to the predominant use of these animals for polyclonal antibody production. Antibody and antigen structural forms in humans and mice are similar, which is the prime reason for their increasing usage in research. Thus, the mouse segment is expected to generate significant revenue by 2025.

Rabbit antibodies, due to high specificity, showcase an enhanced immune response to small epitopes, facilitating increased recognition during disease diagnosis. The large variety of high-affinity antibodies produced by rabbits aids in finding immunoglobulins that have a wide range of applications, such as immunohistochemistry, ELISA, Western Blotting, immunocytochemistry, and others. This is anticipated to have a positive impact on the segment growth. 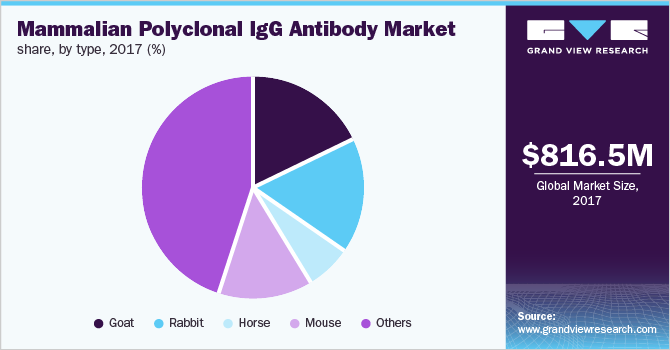 When a large volume of antisera is required, antibodies are generally harvested from large animals, such as horses. Horses are also relatively better hosts for antibody production for several diseases including influenza, tuberculosis, Crohn’s disease, and asthma. Horse antisera have also been used for the treatment of tetanus, snake bites, and diphtheria among others. Mice are extremely useful for research on complex diseases due to their similarities with humans. Thus, research on hypertension and atherosclerosis is mainly conducted using mice as host species. Due to all these factors, this segment is also anticipated to gain considerable market share in the near future.

On the basis of application, the market is segmented into ELISA, immunoturbidometry, immunoelectrophoresis, antibody identification, immunohistochemistry, immunocytochemistry, and western blotting. Western blotting held the largest revenue in the year 2017, owing to its sensitivity and specificity. The use of Western Blotting facilitates disease detection with few antibodies, considerably reducing laboratory costs. The protein specificity of these tests is another key factor responsible for its increased demand.

However, the ELISA segment is anticipated to witness the highest CAGR of 5.8% over the forecast years due to its predominant use in antibody-related tests. It is the most often used test due to its accurate diagnosis of diseases, such as AIDS, Lyme disease, syphilis, pernicious anemia, and viral infections. The immunohistochemistry, used in tumor detection, is expected to account for a significant market share in the near future.

This is mainly due to its higher specificity, which aids in the identification of structural differences, often seen in tumor cells. Rising adoption and advancements in equipment are also likely to propel segment growth.

Based on end-use, the market is divided into hospitals, diagnostic centers, and academic and research centers. Rising disease prevalence and increasing use of biomarkers for testing and diagnostic purposes are anticipated to influence the diagnostic centers segment growth. It held the largest market share owing to the high usage of polyclonal antibodies for disease diagnosis. According to the World Health Organization (WHO), the incidence of tropical diseases, such as malaria, chikungunya, dengue, and yellow fever, has increased significantly, driving the demand for polyclonal antibodies.

Thus, the diagnostic centers segment is anticipated to gain a significant market share during the forecast period. Academic and research centers generated significant revenue in 2017 due to the increased number of research activities on personalized medicine and improving drug efficacy. Hospitals held a considerable market share, owing to the high number of cases and diagnostic tests conducted in these settings. The rise in the number of hospitals across the globe has also led to the growth of this segment. The growing need for hospitals with advanced facilities for the detection of antigens in patient samples due to the increasing prevalence of chronic diseases will also drive the segment.

North America led the market in 2017 due to the presence of well-equipped research facilities and leading companies producing antibodies in the region. Moreover, quick adoption of advanced technologies and focus on clinical research are expected to drive regional growth. Favorable reimbursement policies in the U.S. have propelled the use of polyclonal antibody techniques in the country.

The presence of government organizations, such as the CDC, has contributed to the dominance of the regional market. Rising awareness among people and increasing R&D activities are some of the key factors contributing to the growth. Furthermore, collaborative programs between U.S. and China or biomedical research and increased research funding are expected to boost the market during the study period.

Asia Pacific (APAC) is anticipated to witness the highest growth during the forecast period owing to rising disposable income and the increasing prevalence of cancer and diabetes. The growing focus of leading manufacturers on strengthening their presence in the emerging countries of APAC will also augment the regional market. Moreover, high demand for regenerative medicines and government support are expected to fuel growth in APAC.

The market includes a large number of global and local companies. Some of the key companies include Abcam PLC; Bio-Rad Laboratories; Thermo Fisher Scientific, Inc.; Merck KGaA; Cell Signaling Technology, Inc.; and F. Hoffman-La Roche. Most of these firms have a strong geographic presence, in terms of distribution networks and operating facilities. For instance, Abcam PLC is present in 130+ countries.

These organizations have undertaken various business strategies including M&A and strategic agreements to gain a competitive edge over other companies. For instance, in January 2018, Abcam signed an exclusive license agreement with Roche AG under which, the product portfolio of Spring Bioscience Corporation will be accessible to Abcam for research purposes. The portfolio consists of over 243 recombinant rabbit monoclonal antibodies.

Regional expansion is another strategy undertaken by most market players. For instance, in November 2015, Abcam announced the launch of its direct service in Singapore to strengthen the collaborations with research institutes and companies in the Asia Pacific region.

This report forecasts revenue and volume growth at global, regional, and country levels and provides an analysis of the latest industry trends in each of the sub-segments from 2014 to 2025. For the purpose of this study, Grand View Research has segmented the global mammalian polyclonal IgG antibody market report on the basis of type, product, application, end use, and region:

How big is the mammalian polyclonal igg antibody market?

What is the mammalian polyclonal igg antibody market growth?

b. North America dominated the mammalian polyclonal IgG market with a share of 35.1% in 2019. This is attributable to the presence of well-equipped research facilities and leading companies producing antibodies in the region. Moreover, the quick adoption of advanced technologies and focus on clinical research are expected to drive regional growth.

Who are the key players in mammalian polyclonal igg antibody market?

What are the factors driving the mammalian polyclonal igg antibody market?

b. Key factors that are driving the market growth include the rise in investments by biotechnology and pharmaceutical companies leading to technological advancements creating significant demand for these antibodies.