The global metal casing market size was valued at USD 36.98 billion in 2019 and is expected to expand at a compound annual growth rate (CAGR) of 3.2% from 2020 to 2027. The benefits of metal over plastic in the construction of casing for laptops are anticipated to propel market growth as demand for laptops and tablets continues to grow. The market growth was affected in 2020 on account of the COVID-19 pandemic as the virus outbreak caused shutdowns in mining and manufacturing operations, thereby impacting the raw material supply and production activities. Demand for metal casing declined as end-users, such as mobile phones, faced a steep decline in sales during the first half of 2020. However, players in the smartphone industry are expecting a positive outlook in the near future, which is expected to boost the market growth. 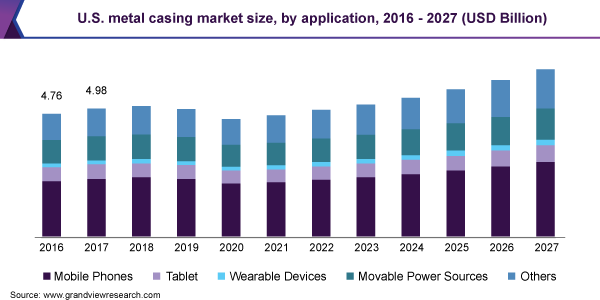 In the North American market, the U.S. accounted for the largest revenue share in 2019. The country is known for its developed information technology sector with the presence of multinational companies, such as Apple Inc.; HP; and Dell. The presence of assembly lines of prominent players and the growing demand for laptops is expected to fuel the growth of the market in the country.

In the past few years, the sales of desktops and laptops declined as they faced competition from their alternatives, i.e. smartphones and tablets. However, despite a declining trend in the overall PC industry, key players such as HP, Lenovo, Dell, Apple Inc., and Asus continued to maintain their sales, which is a positive sign for market growth. The global laptop shipments witnessed an increase of 2.3% from 2018 to 2019.

In addition, in a race toward buying the best, the demand for the metal has outpaced that for plastic in terms of materials used in phones. Factors such as premium look, modernity & simplicity in manufacturing, and heat dissipation have shifted the preferences of manufacturers and consumers toward the metal body in phones.

Smartphones have shown a positive sales trend until 2018 post which the sales slightly declined in 2019. The dip in sales further increased significantly due to the COVID-19 pandemic in 2020, where lockdown and suspension of manufacturing activities obstructed the shipments. However, players in the smartphone industry expect a U-shaped recovery on account of the upcoming technological innovations in the industry. This is a positive sign for market growth.

Mobile phones emerged as the largest application segment of the market, accounting for a revenue share of more than 47.0% in 2019. They are expected to maintain their lead over the forecast period. Metal casing gained prominence in the mobile phone industry with the advent of smartphones. In addition, its preference further increased due to the demand for eco-friendly, slim, and multi-functional smartphones as these casings provide high tensile strength, high ventilation efficiency, and enhanced aesthetic appeal.

Tablet is another prominent application segment of the global market. Metal casing provides robustness to slim tablet devices. Metal started replacing plastics in tablets to achieve a better build and quality. Prominent brands such as Amazon and Samsung utilize metal casings for their tablets. The demand for tablets accelerated owing to the spread of COVID-19 as there was a surge in the adoption of e-learning across educational institutions and enterprises. Additionally, tablet manufacturers are expected to strike partnerships with schools, colleges, and edutech firms in India to expand their target markets. Growing demand for tablets is expected to boost the market growth in the near future.

The stamping and MIM segment accounted for the largest share of more than 88.0% in 2019 and is expected to maintain its lead over the forecast period. Metal stamping delivers high tolerance, electrical conductivity, corrosion resistance, and a smooth finish. The stamping process in the manufacturing of metal casing has gained popularity owing to its faster speed, cost-effectiveness, and ability to manufacture large quantities of products. 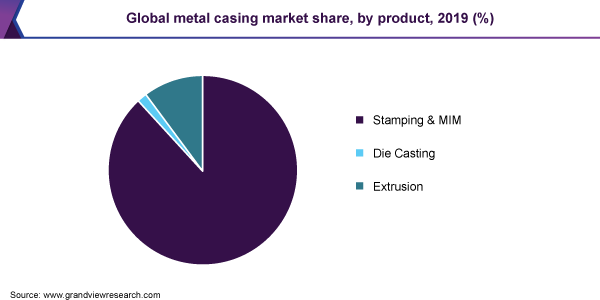 Metal Injection Molding (MIM) allows for the manufacturing and shaping of complex casings in a cost-effective manner, which is why it has gained the manufacturers’ preference. The ability to produce components on a large scale with enhanced properties and minimum wastage has augmented the use of the MIM process in the market, especially in North America and Europe.

The Asia Pacific dominated the global market and accounted for a share of more than 56.0% in 2019. The region is a hub for smartphones and consumer electronics manufacturers. Although U.S.-based companies are known for their products, their assembly and manufacturing take place in Asia. For example, all Apple smartphones and Google Pixel phones are manufactured in China, whereas Samsung has its phones manufactured in South Korea, Sony in Japan, ASUS in Taiwan, and LG in India.

China held a major share in the global market space in 2019. The country is home to various key players, such as CATCHER and Foxconn. Recent events such as the U.S.-China trade war and the COVID-19 pandemic compelled manufacturers to shift their production bases outside China, which may slightly impact the product demand in the country, but overall will have a positive impact on the Asia Pacific market as the companies are focused on setting up their plants in Southeast Asian countries and India. In September 2020, Japan’s Ministry of Economy, Trade, and Industry announced the provision of subsidies to Japanese companies for shifting their manufacturing setup from China to the ASEAN Countries, along with India and Bangladesh.

North America held the second-largest share in the market in 2019 owing to a wide presence of prominent PC manufacturers in the region. Although Asia, particularly China, dominates the assembly lines, there are prominent players who have their manufacturing based outside China. For example, Dell, Hewlett-Packard or HP, and Apple Inc. are among the major players in the PC industry who have production and assembly lines in the U.S.

The Middle East and Africa markets witnessed sluggish growth in 2019 owing to a slowdown in the sales of smartphones and laptops. As per the document released by the World Bank Group, the GDP of the Gulf Cooperation Council (GCC) declined to 0.8% in 2019. The declining macroeconomic conditions are projected to continue in FY 2020 due to the emergence of the global pandemic. In the long term, the Middle East and Africa are expected to witness steady growth as the region is attracting various electronic device manufacturers to set up their plants.

For instance, Vivo, a Chinese smartphone manufacturer, announced its expansion plans in 2019 by opening a regional facility in Dubai. Similarly, Tecno Mobile, one of the largest smartphone manufacturers in Africa, announced its plans to increase its market share in the Middle East, competing with Samsung, Huawei, and Xiaomi. Such expansion plans and rising competition among smartphone makers are likely to promote smartphone production in the Middle East and Africa, thereby driving the market.

The market is competitive and is majorly dominated by Taiwanese manufacturers, such as CATCHER, Foxconn, PEGATRON, and Waffer Technology Corp. The competitive scenario has been intense in Taiwan as the market was negatively impacted in 2019 and 2020 owing to the U.S.-China trade war and the emergence of the COVID-19 pandemic, thereby affecting the manufacturing operations and sales and distribution of certain players.

The market players have observed weak consumer demand, low wages, and income inequality as some of the issues, coupled with increasing competition from the red supply chain. Furthermore, the players are expected to face a few other challenges in the coming years owing to the negative impact of the U.S.-China tech war across the supply chain and the saturation of the end-use markets. Some of the prominent players in the metal casing market include:

This report forecasts revenue growth at the global, country, and regional levels and provides an analysis of the latest industry trends and opportunities in each of the sub-segments from 2016 to 2027. For the purpose of this study, Grand View Research has segmented the global metal casing market report on the basis of product, application, and region:

How big is the metal casing market?

What is the metal casing market growth?

Which segment accounted for the largest metal casing market share?

b. Mobile phones dominated the metal casing market with a share of above 47.0% of the market in 2019.

Who are the key players in metal casing market?

b. Some of the key players operating in the metal casing market are CATCHER, Foxconn Technology Co., Ltd, Waffer Technology Corp, PEGATRON Corporation, Casetek Holdings Limited, and others.

What are the factors driving the metal casing market?

b. A surge in demand for laptops and tablets is expected to propel metal casing market growth in the coming years.