The global microarray market size was valued at USD 3.90 billion in 2018 and is anticipated to grow at a CAGR of 8.7% during the forecast period. Microarrays have a wide range of applications and have found increasing usage in basic molecular biology, toxicological response profiling, pharmaceutical target screening, and biomarker identification. The ability of microarrays to facilitate the analysis of thousands of genes at the same time has resulted in the success of this technology in the past few years. 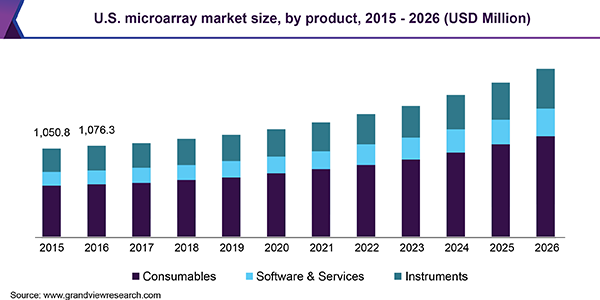 The global rise in the incidence of cancer is one of the key factors propelling the market growth. According to a report published by WHO in 2018, global cancer was estimated to have risen by 18.1 million new cases during this year leading to 9.6 million deaths. The rise in healthcare R&D is also anticipated to be one of the factors boosting market potential during the forecast period.

The rise in the usage of microarrays in various applications is another factor anticipated to propel market growth during the forecast period. For instance, the use of microarray analysis has proven to be effective in antibiotic treatment as bacterial genomic DNA in most cases outlasts the viability of bacteria. DNA microarray is usually used in such cases as a diagnosis can be made using a small amount of DNA instead of a larger amount of bacteria needed for the culturing. In the recent past, the usage of DNA-based microarrays has become the method of choice for assaying gene expression. This is mainly attributed to factors such as complexity and cost reduction facilitating the technology to be more accessible and standardized.

However, rapid advances in NGS have facilitated NGS to be a highly cost-effective, specific, and accurate alternative that can hinder the market growth. Other factors that are expected to restrain market potential include strict government regulations, standardization of microarray data, and lack of skilled professionals.

Based on product, the market is segmented into consumables, instruments, and software & services. Repeat and bulk purchase of consumables for various research applications is the dominant factor attributing to its large market share in 2018. This product segment is anticipated to continue its dominance throughout the forecast period owing to its incessant usage in research procedures.

A wide range of instruments has been developed by leading market players, facilitating their increased adoption. Thermo Fisher Scientific Inc. offers products such as GeneChip Scanner that aid in scanning next-generation high-density arrays for transcription and all-exon arrays. Another such product offered by the company consists of the Gene Chip Hybridization Oven which provides precise temperature and rotation of samples thereby enabling successful hybridization.

A rising number of product launches with regard to the software and services segment is also anticipated to boost market potential during the forecast period. For instance, PerperPRINT, a biotech company launched PEPperCHIP Allergen Epitope Microarray in 2015, this device enables high throughput screening of IgE antibody response from plasma and serum. The product covers about 4022 allergen epitopes of the Immune Epitope Database (IEDB), facilitating easy profiling of immune responses in blood sera linked with immunization, cancer, infectious diseases, and other autoimmune diseases.

According to a research study published by the Royal Society of Chemistry in 2019, a portable fluorescence microarray imaging system that connects to a smartphone has been used for the detection of breast cancer gene expression. The technique is based on an interactive binding of Cy3- target DNA to probe DNA. Such technological advances are anticipated to facilitate the easy diagnosis of cancer, thereby boosting market growth.

Based on the microarray type, the market is segmented into DNA, protein, and other microarrays. DNA microarray held the largest market share in 2018 owing to its wide range of applications in gene expression analysis, transcription factor binding analysis, and genotyping among others.

Protein microarrays are typically constituted of various support surfaces such as nitrocellulose membranes, slides, microtitre plates, and beads causing the binding of proteins. The rise in the adoption of protein microarrays by leading pharmaceutical and biopharmaceutical companies for drug discovery and toxicology studies is anticipated to further fuel market growth.

Based on application, the market is segmented into research applications, drug discovery, disease diagnostics, and other applications. Research applications held the largest market share in 2018 due to the rise in private as well as government funding for research in genomics and proteomics. For instance, in 2018 UVic-Genome BC Proteomics Centre, a central hub of the Canadian Proteomics Centers received funding of USD 18 million from Genome Canada and Genome British Columbia to facilitate improved diagnosis of a wide range of diseases such as cancer and Alzheimer’s disease. The funding is also expected to aid rising research in the rapidly developing field of personalized medicines.

Microarrays are used by various companies in drug discovery as they are used to measure expression patterns of various genes, generating data on gene function aiding in the identification of appropriate target patients for therapeutic evaluation during clinical trials. DNA microarrays prove to be highly beneficial as they facilitate researchers to identify individuals with similar biological patterns and design drugs specifically to treat disorders. Microarrays are also used extensively during clinical trials as they are used to monitor changes in gene expression caused due to drug treatments.

This technology has facilitated the use of diagnostic biomarkers for the diagnosis of cancer and other diseases. For instance, gene expressions are used in the detection of the presence of carcinoma in situ lesions in the urinary bladder. Agilent’s human miRNA microarray is applied in cancer research using miRNA gene expressions.

Other microarray applications include genomic, proteomic, and toxicological research. In some cases, custom microarrays are specifically designed for heart genes which help in the detection of ischemic and non-ischemic heart failure with high specificity and sensitivity. These are also used for the classification of various cardiomyopathies facilitating effective diagnosis.

For instance, in a report published by NIH in 2018, it was observed that microarrays are used in the process of discovery of a drug used in cancer treatment. According to a report published by India Brand Equity Foundation (IBEF) in 2018, the hospital and diagnostic centers segment in India has attracted Foreign Direct Investment (FDI) worth USD 6 billion between the years 2000 and 2018. Increasing R&D investments in the healthcare sector are further anticipated to fuel market growth. 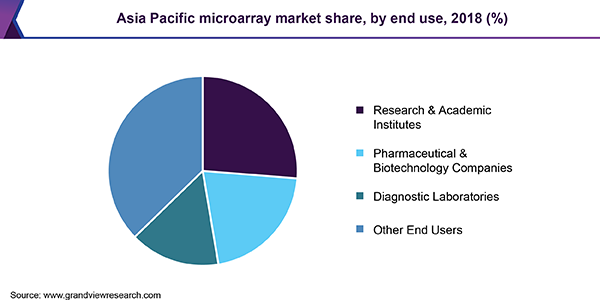 In 2016, Illumina Inc. and the University of Colorado, Vanderbilt University, Montreal Heart Institute, and Partners Healthcare signed four biobanking agreements. According to the agreement, Illumina’s array platforms such as Infinium Expanded Multi-Ethnic Genotyping Array, Illumina sequencing systems, and Infinium HumanMethylation 450K Array are used by these research institutes for genotyping over 2, 00,000 samples, gaining insights on genetic factors causing cancer, heart disease, bipolar disorders, and others. Thus, rising collaborations such as these are anticipated to further improve healthcare and facilitate advancement in the field of personalized medicine.

Pharmaceutical and biotechnology companies are anticipated to boost the market owing to strategic acquisitions done by leading companies to expand their product portfolio. For instance, in 2016, Thermo Fischer Scientific Inc. acquired Affymetrix, a manufacturer of DNA microarrays. Microarray products of Affymetrix are widely used for gene expression and genetic variation analysis.

Diagnostic laboratories are anticipated to increase the demand for various products offered by leading companies used to diagnose infectious diseases, cancers, diet-related, and autoimmune disorders, and other diseases. For instance, Applied Microarrays Inc. offers custom arrays to diagnose cancer, and infectious diseases such as influenza, Ebola, and sepsis among other diseases. Some of the other diseases detected by these products consist of diet-related disorders such as dysbiosis & general food intolerance and autoimmune disorders such as celiac.

The microarray market on the basis of region is segmented into North America, Europe, Asia Pacific, Latin America, and Middle East & Africa. North America held the largest revenue share in 2018 due to a rise in the number of cancer patients in the U.S. According to the European Commission, the government of Europe will be funding $7.5 billion for R&D in the field of biotechnology facilitating a rise in the use of microarrays for various genomic and proteomic research in the European region. Similarly, the government of Denmark has intended to spend $14.94 million from 2017 to 2020 for a new genomic research center further facilitating increasing usage of microarrays.

The Asia Pacific region is also anticipated to witness significant growth due to rising funding from the government in the healthcare sector. According to IBEF, the healthcare sector in India received an investment of $679 million in 2018. Such government initiatives are anticipated to lead to increasing demand for microarrays for research purposes.

In 2019, Agilent Technologies Inc., signed a multiyear supply agreement for custom microarrays with SomaLogic, Inc. a biotechnology company based in Colorado, U.S. According to the agreement, Agilent would be supplying customized oligo microarrays for usage in the detection of nucleic acid with SOMAscan assay which is SomaLogic’s protein measurement assay majorly used in clinical and basic research, pharmaceutical development and discovery, and diagnostics.

This report forecasts revenue growth at global, regional & country levels and provides an analysis of the industry trends in each of the sub-segments from 2015 to 2026. For the purpose of this study, Grand View Research has segmented the global microarray market report on the basis of product, type, application, end use, and region:

How big is the microarray market?

What is the microarray market growth?

Which segment accounted for the largest microarray market share?

b. DNA Microarrays dominated the microarray market with a share of 42.1% in 2019. This is attributable to its wide range of applications in gene expression analysis, transcription factor binding analysis, and genotyping among others.

Who are the key players in microarray market?

What are the factors driving the microarray market?

b. Key factors that are driving the market growth include global rise in the incidence of cancer, an increase in healthcare R&D, and the usage of microarrays in various applications such as antibiotic treatments, gene expression. and NGS.